How to end cycle of violence between Palestinians, Israelis

The latest attack in a Tel Aviv market raises questions about the factors pushing Palestinians to commit such acts of violence against Israelis and illustrates the need for talks about applying the two-state solution to end the cycle of violence between both parties. 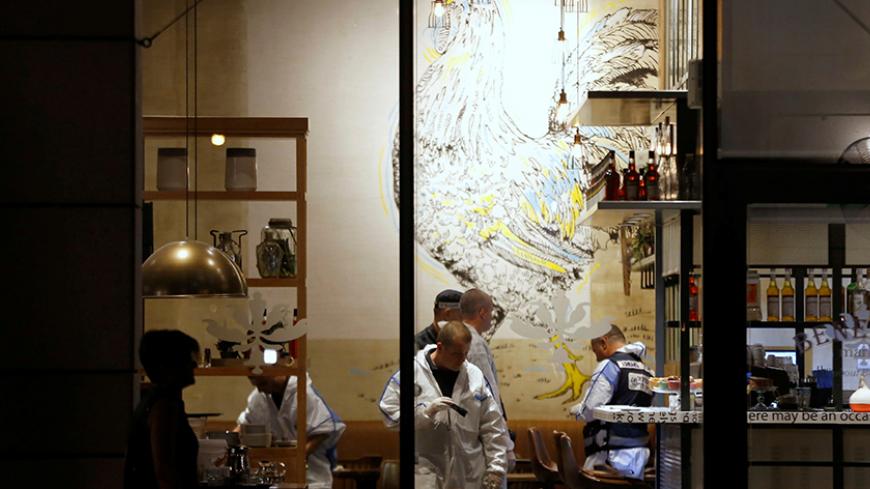 Israeli policemen work inside a restaurant following a shooting attack that took place in the center of Tel Aviv, June 8, 2016. - REUTERS/Baz Ratner

The cycle of violence in Palestine and Israel has become so predictable that almost anyone following the news can easily forecast what will happen next. For Palestinians, Israelis and the international community, the predictability of the cycle of violence points to lifting the Israeli occupation as the most effective way to end the violence. The June 8 attack on a market in Tel Aviv that left four Israelis dead is no exception to this dynamic.

Palestinians speak of the absence of a peace process and lack of a political horizon as a factor in the deepening cycle of violence. Muammar Orabi, director general of the Ramallah-based Wattan News Agency, told Al-Monitor that what happened in Tel Aviv is a natural outcome of the current political decline. “Palestinians have lost hope, and there is an unprecedented sense of frustration in the occupied territories,” Orabi said.

This opinion is not restricted to Palestinians. In an interview with journalist Ilana Dayan on Israel Army Radio (Galei Tzaha) on June 10, Ron Huldai, the popular mayor of Tel Aviv, pointed the blame. Huldai, a former air force pilot and ambitious Labor Party leader, said that there are more than 200 territorial disputes worldwide, adding, “We might be the only country in the world where another nation is under occupation without civil rights. You can’t hold people in a situation of occupation and hope they’ll reach the conclusion everything is alright.”

The need to end the violence was also expressed by Israeli Knesset member Ayman Odeh, the head of the Joint List of predominately Arab parties. Odeh was quoted in the Jerusalem Post as saying, “Remove all Palestinian and Israeli citizens from the cycle of terror and bloodshed. We must fight together to bring an end to the occupation, and do the right thing for justice and peace for both peoples.”

The attack on the Tel Aviv market, across the street from Israeli military headquarters, came at a time when most Israeli officials were celebrating that the number of Palestinian knife attacks had dramatically fallen.

While denouncing the attack and describing it as “futile,” Izzeldin Abuelaish, a Gaza doctor who lost his three girls during the 2009 war on Gaza, told Al-Monitor that the attack was a double-edged sword. In a phone interview, he said, “On the one hand, it is going to embolden those in the Israeli government who have been searching for excuses not to make peace with the Palestinians, and at the same time, it clearly shows the frustration of a people under occupation and without rights.”

Abuelaish, whose book “I Shall Not Hate” has helped earn him multiple honorary doctorates and three consecutive nominations for the Nobel Peace Prize since 2013, is skeptical about the current Israeli government’s desire for peace. “Peace is a way of life that is translated in action and words,” Abuelaish said.

Currently working as a professor of medicine at the University of Toronto, Abuelaish wants greater pressure to be put on Israel to help break the cycle of violence. “Palestinians have been burnt repeatedly from violence. We need to stop this violence, and the only way that can happen today is for the world to become much more involved,” he said.

Abuelaish said that he abhors violence and feels that nonviolent resistance, such as the boycott, divestment and sanctions (BDS) movement, is the appropriate mechanism to help put an end to the occupation. “The cycle of violence is deepening, and we need pressure from the world, including nonviolent action like the BDS movement, to help to put an end to it,” he said.

Israeli politicians are burying their heads in the sand while coming to realize that the correlation between the occupation and violence against Israelis is growing pronouncedly. More than a month ago, on April 28, an Israeli military official, Col. Shay Klapper, predicted that the byproducts of the occupation would not disappear even if a particular method of resistance decreased. “The quiet isn't stable,” he said.

Klapper, an Israeli battalion commander in the northern districts of the West Bank, anticipated that the decrease in the number of terror attacks would be short-lived. “When the wave is renewed, it will be at a much higher pace,” Klapper told Ynet. “It won’t return to be 13-year-olds with knives.” Ynet, a leading news service, also reported that five other senior army commanders held “similar” views.

The outbreak of what Palestinians refer to as the “habbeh” (Arabic for “outburst”) — involving attacks, mostly with knives — has elicited disproportionate Israeli military responses, often including extrajudicial killings. The Israeli human rights group B’Tselem reported on June 6 the existence of irrefutable evidence of Israeli soldiers summarily executing Palestinian protesters who posed no danger to their lives. In a press release, B’Tselem claimed that it had video recordings of at least two cases in which soldiers executed Palestinian activists in the past few months. The two killings took place in Hebron not far from the village of Yatta, the hometown of the two Palestinians accused of the attack in the Tel Aviv market.

World leaders realize that to break the cycle of violence, a political horizon must be created for the Palestinians. When French President Francois Hollande and US Secretary of State John Kerry, as well as other leaders, use the term “two-state solution,” they are indirectly indicating that the key to ending the violence is ending occupation.

Lifting the occupation and creating a Palestinian state are the conditions called for by all the local, regional and international parties working toward a French-proposed international conference. In a joint statement, participants at talks in Paris on June 3, including UN Secretary-General Ban Ki-moon and some 25 senior European and Arab diplomats, urged Israelis and Palestinians to “genuinely” commit to a two-state solution and to create conditions for “fully ending” the Israeli occupation of Palestinian lands.

Palestinian frustration with 49 years of occupation has led moderates and extremists to search for different methods of resistance. Palestinians have tried the diplomatic route, violence and nonviolent methods, and Israel has not adequately responded to any of them, while falsely claiming it is interested in peace.

The cycle of Israeli-Palestinian violence can be explained by Sir Isaac Newton’s third law of motion. In laypeople’s terms, Newton’s theory is summarized by the now familiar saying that for every action, there is an equal and opposite reaction. The only logical way to end this violent action-reaction cycle is to end the occupation.