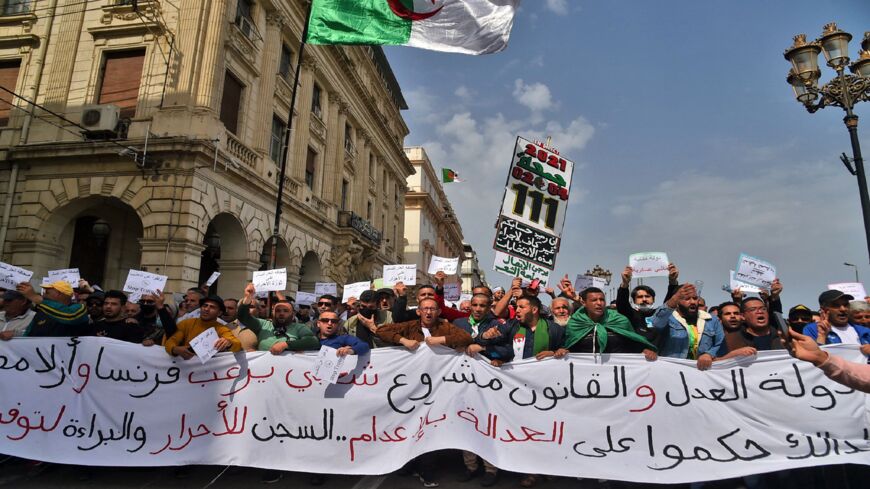 Algerians carry a large banner during an anti-government demonstration in the capital, Algiers, on April 2, 2021. - RYAD KRAMDI/AFP via Getty Images

Protesters took to city streets across Algeria on April 2, with demonstrators rallying at locations throughout the country and calling for the fall of a regime they have come to see as having oppressed them for generations.

Their progress has been extraordinary and their achievements equally so. In opposition to a state backed by one of the largest militaries in the region, the mass protests, or Hirak, have forced unimaginable concessions from a government that has consistently prized stability above progress and continuity above change. However, now, in its third year, there is growing concern among the Hirak's ranks over the entry of the country's Islamists into the movement and, unfettered by domestic restrictions on internet usage, the dominant voice overseas Islamists are seeking to assume.

For a government keen to push the notion of early legislative elections, scheduled for June this year, as the panacea for many of the country's ills, the entry of the Islamists into their only principal opposition offers the possibilities of a strawman with which to discredit the protests. Already, in mid-March, an Algiers court issued arrest warrants for three overseas activists accused of attempting to turn the peaceful protests violent. Principal among the international warrants was that for London-based Mohamed Larbi Zitout, a former diplomat and founder of the banned Rachad party, known to include past members of the Islamic Salvation Front (FIS), an active participant in the decadelong civil war of the '90s.

"The Hirak itself remains largely the same," Zine Ghebouli, a political consultant specializing in Algerian affairs, told Al-Monitor. "That is, a representative movement that draws from all strands of political life in Algeria. What's changed is the entry of the Islamists and, even if there are only 10 of them in a crowd of, say, 10,000. It's that 10 that their social media accounts will make sure you see."

It's difficult to overstate the divisive nature of Islamism within Algerian society. While many are still drawn to the marriage of religion and politics Islamism offers, others remain scarred by memories of the "dark decade" of the 1990s, when a disputed election in 1991 led to a civil war between the FIS and its allies and the state security services, whose brutality continues to shape contemporary Algerian society.

Overall, around 200,000 were killed in the conflict, with both sides accused of involvement in civilian massacres whose savagery and scale defy imagination. Twenty-thousand people, most of them civilians, are supposed to have been forcibly disappeared. While the state eventually emerged victorious, few were left in any doubt over the incredible lengths the ruling elite would go to to preserve their place at the center of Algerian society.

Now, on the streets of the cities, Islamists again appear to be a presence, with their slogans and their banners proclaiming their hostility to the intelligence services and the military, while relitigating an election that took place almost 30 years ago. "At the start of the Hirak, the issue of the 1990s wasn't even in people's minds," Ghebouli explained. "Now it's everywhere. It's omnipresent. The banners, the slogans, all of it.

"For the state, that's a potential tool. If the Hirak continues beyond June's election, they can turn to the international community and say, look, we tolerated this for two years. It wasn't until the Islamists looked like they were taking over that we were forced to take action," Ghebouli concluded.

Nevertheless, while the Islamists seek to increase their visibility within the weekly marches, many of the causes that spurred demonstrators onto the streets in 2019 remain. The opaque cabal of unionists, military officers and security service apparatchiks that surround the presidency remain in place, while the economy remains almost entirely reliant on stuttering gas and oil exports.

Aldja Samia Seghir from the pro-democracy movement Ibtykar has been active within the Hirak from its inception. However, over recent weeks she has begun to notice a shift in the atmosphere.

"It is true that there is more toxicity today in the Hirak," Seghir explained over social media from Algiers, going on to outline how Islamists and those connected to the Rachad party were seeking to insert their slogans and watchwords into the debate, often from locations overseas, "giving the impression that they are everywhere in the country," she said. Seghir continued, outlining how the entryists sought to trade on the political capital of the pro-democracy movements to advance their own agenda, principally a whitewashing of the dark decade.

Given the climate, many of the demonstrators are now beginning to focus on a June election that, under normal circumstances, many would dismiss. While to some, engaging with a state known for its corruption might seem a backward step, Seghir chose to cast it against the scale of the giant country and its long history, "Democracy does not fall from the sky. It is built by increments and it takes time, that's all."