Human rights groups say the situation in Algeria has been deterioriating, including the recent arrest of three lawyers for representing Hirak protesters. 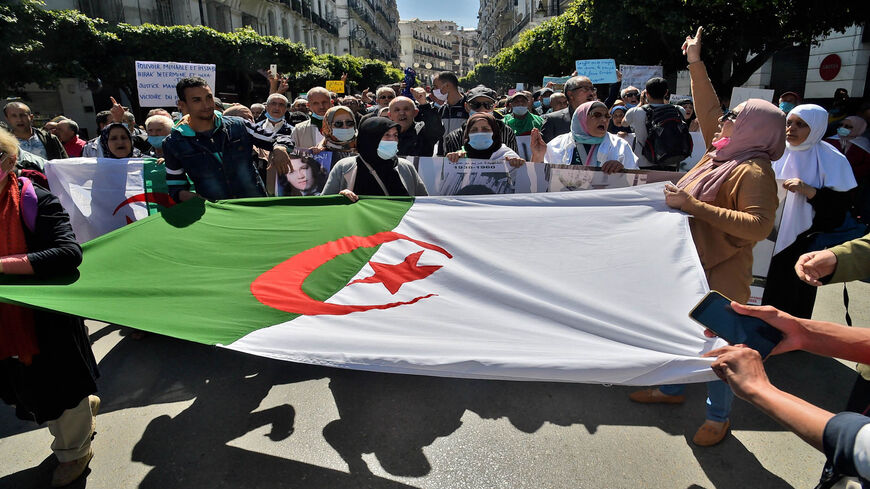 Algerian anti-government protesters take to the streets of Algiers as the Hirak pro-democracy movement keeps up its weekly demonstrations despite a ban on gatherings due to the coronavirus pandemic, Algeria, March 26, 2021. - Ryad Kramdi/AFP via Getty Images

A year ago, Algerian authorities shut down the popular pro-democracy reform movement known as Hirak, whose massive weekly Friday protests called for former President Abdelaziz Bouteflika to step aside and allow free and fair elections.

Following the 2019 elections, the Hirakists continued to campaign to change the system from the military one-party state installed by Houari Boumediene after the post-independence coup d’etat in1965. However, demonstrations were brought to an end in a crackdown last year resulting in the arrests of thousands of activists and over 300 held in pre-trial detention for up to a year, many under allegations of terrorism.

In protest against their imprisonment, some 40 detainees held in El-Harrach prison in Algiers began a hunger strike Jan. 28 ahead of the anniversary of the start of the Hirak movement on Feb. 16, 2019. Around 330 people were held in custody as of Feb. 5, according to the Algerian League for the Defense of Human Rights, one of the human rights groups that have criticized the use of lengthy pretrial detentions as a tool of repression by the Algerian government.

Algerian society was shaken when activist Hakim Debbazi died in pre-trial detention April 24 in Kolea prison in the capital Algiers, after his arrest Feb. 22 for Facebook posts deemed critical of Tebboune’s regime. Amnesty’s Amna Guellali said, “It is quite shocking but it is not the first death in custody of someone detained solely for exercising his freedom of speech.”

She noted, "[Despite calls for investigations into these deaths] the authorities do not take their obligation to bring in independent investigators to investigate these deaths seriously.”

Eric Goldstein, deputy director of the Middle East and North Africa division at Human Rights Watch, told Al-Monitor, “There has been an escalation of repression." He said that the government is changing legislation to give security services more scope for suppression of the rebellion.

It is not just laws that have been changed to help tighten the state to crack down on dissent, Guellali told Al-Monitor. “They have added repressive tools in their efforts to crush the Hirak movement, including the blocking of WhatsApp.”

Human rights reporting is increasingly difficult in Algeria, whose government is known for secrecy on sensitive and security matters. International nongovernmental organizations (NGOs) rely on a decreasing number of local partner organizations and individuals to record infractions.

Goldstein noted, “It is not always safe for them to talk to foreign NGOs. They can be afraid of retaliation by the authorities. It is also becoming more difficult for these Algerian organizations to report on the human rights situation because of the crackdowns.”

He added, “In the last months, the Algerian League for the Defense of Human Rights has seen three members put in jail, three are on bail awaiting trial and two have been charged awaiting trial."

Although Algeria has always taken a hard line over dissent and never shied away from brutal suppression of the regime’s critics, the right to legal defense has never come under attack until this past year. Human rights groups have criticized the use of lengthy pretrial detentions as a tool of repression that  now been turned on lawyers.

On May 26, 2021, the first lawyer to be arrested in connection with the Hirak movement was Abderraouf Arslane. Civil society has been campaigning for his release for the past year. He was released provisionally as the sentence was one year in prison and two suspended. Last month, two more lawyers Abdelkadir Chohra was detained May 14 and Yacine Khelifi on May 31.

Zine Ghebouli, international relations scholar at the University of Glasgow, told  that even in the 1990s when the state was practically at war with Islamist factions, lawyers defending those opposing the government had remained immune from arrest. “This is the first time that lawyers have been targeted,” he said.

Goldstein added,The lawyers were arrested in the line of duty, defending their clients and exposing their abuses [by the state/authorities]. With the arrests of the three lawyers, they have crossed a new red line.”

Unlike Egypt, Algeria manages to keep a relatively low public profile. Guellali noted, “There is less violence than in Egypt, but more than 300 people have been detained for defending their freedom of expression, and that story doesn’t appear very often in the international press.”

To raise awareness a coalition of 38 civil liberties and international and Algerian human rights organizations created the #notacrime campaign, a media and online awareness campaign that ran between May 23 and May 28, which coincided with the anniversary of the death of human rights defender Kamel Eddine Fekhar, who died in 2019 after a 50-day hunger strike protesting his imprisonment for his critique of the government.

In parallel, organizations such as Lawyers for Lawyers and the French Bar Association have continued to campaign on behalf of detained lawyers. They say the arrests of lawyers “constitutes new escalation in the unrelenting  of fundamental freedoms.”

“Tebboune has been the worst president for the past years for human rights. Even under Bouteflika human rights were not this bad,” Ghebouli noted. “Tebboune is trying to mimic Boumediene in a very different context. [He] is trying to restart Algeria’s repressive machine.”

Reflecting on Algeria’s complex history, Ghebouli sees the  as part of something greater than the simple silencing of dissent. They are a bigger piece of the political theater that has played cyclically in three acts: repression, pardon and release of prisoners of conscience with a mass public pardon “like in the1990s.”

Goldstein said that Tebboune has used mass pardons in the past at “critical political moments."

He explained, "They are appearing to do something but those who are released are not able to speak freely. They are not changing the laws or the practices, so it is not a solution.”

Ghebouli concluded, “The youth are fed up and there is a crisis of trust between citizens and the government. So any national reconciliation agenda should take into account the past three years — if not, then it is another political theater piece."