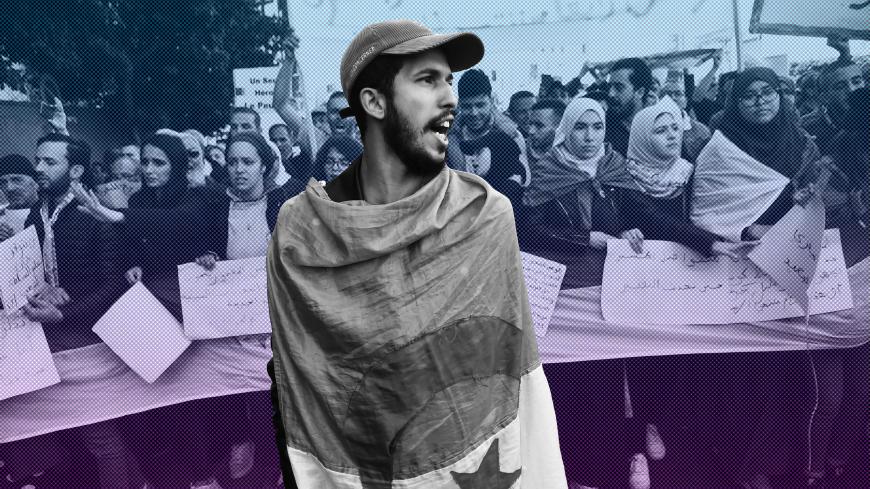 On Feb. 16, the Algerian town of Kherrata held a demonstration to mark the first anniversary of the Hirak protest movement. It was in this small northeast city where the year before, the first mobilization against now-deposed President Abdelaziz Bouteflika and his regime erupted. That protest is largely considered to have paved the way for similar events in other cities in the days after that would finally crystalize in nationwide demonstrations on Feb. 22, the formal beginning of the Hirak movement.

This year's protest in Kherrata took place amidst calls for mass mobilization on Feb. 21, to commemorate the birth of the movement and support the protests that have been asking for radical change in Algeria for 52 consecutive weeks. During this time, the Hirak has become what many consider one of the most powerful political movements in the country’s recent history, forcing the reshuffling of much of the political and economic leadership under Bouteflika.

In a speech the same day, Algerian President Abdelmadjid Tebboune referred once again to the Hirak as “blessed” and expressed his will to introduce radical changes in the country in line with the demands of the movement.

“The 22nd of February was the end of one Algeria and the beginning of another,” Zine Labidine Ghebouli, an Algerian scholar at the American University of Beirut, told Al-Monitor. “It is the very first time that we have a national movement against the entire system, which has already collapsed,” he said. “The system is no longer as powerful as it used to be, people are no longer divided and marginalized as they used to be and [the Hirak] also came within an economic context [within which] it is very challenging for the system to keep buying social peace.”

One of the characteristics that allowed the Hirak to last is the steadfast pacifism that it has maintained since its outbreak, largely attributed to Algerians' memories of the civil war in the 90s, the fear instrumentalized by the regime since then, as well as the violence in neighboring countries.

“Pacifism is the most important characteristic of the Hirak,” said Raouf Farrah, a political scientist and member of the Algerian civic movement Ibtykar. “[Algerians] are saying that pacifism is our strength, as if we resort to violence, the regime will be more violent than us,” he told Al-Monitor. “The second factor is that if we fight in a peaceful way, we will bring together different [social] classes around a goal, such as a radical break with the Algerian system.”

In that sense, the Hirak has been an intergenerational and socially diverse movement, cross-cutting issues such as social class, ideology and ethnic and professional groups, with women playing a central role. Through the summer, the Hirak remained highly popular. By October, support for a complete change of the political system had increased.

“[The Hirak] is popular: It includes all trends and ideologies; all categories of Algerian society,” political activist Azzedine Toumi told Al-Monitor.

“The Hirak includes different activists from different generations and it is considered a bridge between them,” said Faouzia Zeraoulia, an associate professor of political science at the University of Jilel.

The Hirak goes far beyond the regional loyalties that played such powerful roles during Bouteflika’s regime. Despite its national nature, however, the mobilizations have been remarkably strong in Algiers and in the east, and less so in other regions, particularly in the interior.

As it marks its first anniversary, the Hirak remains a largely unstructured and leaderless movement, even if some activists have become acclaimed figures and many organizations are deeply involved in the movement or have emerged as a result.

“If the Hirak has rejected the idea of representation and leaders it is because it is a way to protect itself against attempts to infiltrate or manipulate on the part of those in power,” said Toumi.

Yet despite the changes achieved during its first year, significant challenges remain ahead for the Hirak. Since Tebboune's appointment as president, the Algerian regime's strategy has been based on calls for dialogue, promises of profound change and weak concessions, with continued repression to maintain the status quo.

In his Feb. 16 speech, Tebboune expressed his desire to initiate “a serious dialogue,” while state security forces prevented the holding of a press conference organized by a number of Hirak groups to present a manifesto of the movement's demands.

“The main challenge for the Hirak in the last few months is how it can exact real change in the face of the regime rejuvenating instead of reforming,” Yasmina Allouche, a researcher at TRT World Research Centre, told Al-Monitor.

There have been calls for the Hirak to become structured, adopt a formal program and appoint a leadership charged with building bridges with the regime and entering into negotiations. So far, however, only the civilian leaders of the military regime have opened the door for dialogue, and much of the parties that make up the Hirak still reject the idea.

“The Hirak does not need a structure or representation,” Farrah said. “Other analysts say that this is its weak point, but I think that non-representation leaves the regime without a counterpart to co-opt and creates a sense of indeterminacy in which the regime cannot imagine what the next steps will be,” he said. Farrah favors increased coordination among the political initiatives and civil society players that form the Hirak instead.

Even if its pace of biweekly protests, has avoided exhausting protesters, the number of those attending the protests appears to be in decline and the state's concessions have virtually halted since August. Some observers feel that the Hirak should escalate mobilization or find new forms of protest. Maintaining the same level of protest, however, risks increasing frustration among non-protesters, and stepping up activities could alienate them and risk further repression.

“The pressure of the biweekly protests indicates the determination of Algerians to not simply accept what has been imposed on them by the government,” Allouche said, “but they must adopt further steps to ensure they are not run down.”

“The future of Algeria depends on the capability of the [Hirak] to organize itself in a way that allows it to represent an alternative to the system,” said Zine.