Algeria cracks down on press as protest movement persists

Algeria's massive protest movement, temporarily stifled by the pandemic, is also seeing many activists and journalists jailed as the government. 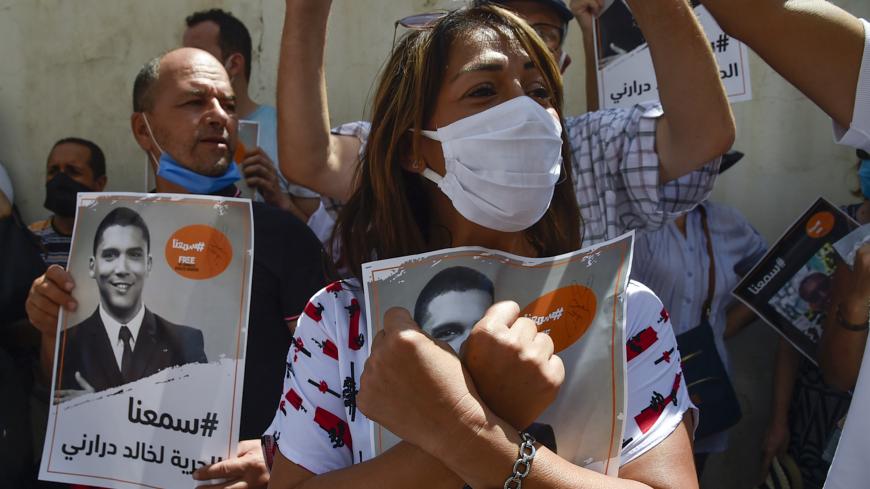 Algerian journalists gather in protest to demand the release of their colleague Khaled Drareni (poster), who was sentenced to three years in jail for "inciting an unarmed gathering" and "endangering national unity," in the capital Algiers on Aug. 24, 2020. - RYAD KRAMDI/AFP via Getty Images

With coronavirus restrictions limiting its public activities, the Algerian protest movement Hirak has found itself under fresh attack, with many of its most vocal proponents jailed as part of a government campaign that rights groups, such as Amnesty International, have slammed as "unprecedented" within the country's recent history.

From its outset in February of last year, the protests presented an unrelenting and unparalleled challenge to the very core of Algerian political power, the pouvoir, the mysterious cadre of military and state apparatchiks that encircle the presidency.

Despite changes in government personnel, switches in policy and dramatic shifts in the state's tactics, the protests have maintained pressure upon the heart of government, with only the outbreak of the pandemic slowing the force of its march.

While free speech within Algeria has never been a given, the recent banning of the French television channel M6 and the high-profile arrest of of independent Algerian journalist and Reporters without Borders (RSF) correspondent Khaled Drareni all point to a tightening of restrictions on press freedom and free expression in the North African country. Along with these two high-profile cases there is a growing list of journalists who have been imprisoned over their reporting or social media activity, often on charges as vague as “harming Algeria’s territorial integrity,” “insulting the president of the republic” or “inciting a gathering.”

The Algerian Communication Ministry's press release announcing the ban on M6 accused the channel of using forged authorisations to shoot a documentary presenting a "biased" view of the protest movement, charges that M6 has strongly denied. Drareni was sentenced to two years on appeal in mid September after having initially been arrested in March on charges of “inciting an unarmed gathering” and “endangering national unity” as part of his reporting on the protest movement.

While making it clear that he had never personally experienced censorship, one independent journalist from Algiers told Al-Monitor, "The pressure on many outlets began during the Hirak. Private television stations and public media organizations were instructed not to cover the Hirak anymore. The authorities stepped up pressure after the December election, censoring many online news outlets and imprisoning a number of journalists, including our colleague Khaled Drareni," he said.

Perhaps predictably, Drareni's arrest has fueled tensions between the government and RSF, an advocacy group campaigning for press freedom. Speaking to the press on Sept. 21, President Abdelmadjid Tebboune claimed the country was the victim of an international conspiracy whereby foreign actors were weaponizing nongovernmental organizations such as RSF to destabilize Algeria. Souhaieb Khayati, the director of RSF's North Africa office in Tunis, told Al-Monitor, "The Algerian authorities are not open to RSF efforts that aim to improve the press freedom situation in Algeria and to release our correspondent, the Algerian journalist Khaled Drareni."

Khayati went on, "In [his] latest interview, President Tebboune claimed that no journalist was imprisoned and he further accused RSF of interfering in the internal affairs of Algeria. Furthermore, he stated that the freedom of the press is entirely respected in Algeria," an assertion contradicting RSF's own index, which placed the country 146th on its press freedom index of 180 countries, marking a significant drop from its high of five years ago when it was ranked 119th.

"Since the election of President Tebboune, freedom of information has been seriously threatened in Algeria. Indeed, several lawsuits were brought against journalists," Khayati said, noting that in addition to Drareni, several others reporters, such as Ali Djamel Toubal, who was sentenced to two years' imprisonment in June for Facebook comments, continue to languish in jail. More recently, has been the case of Abdelkrim Zeghileche, who received a two-year sentence in August for a Facebook post calling for the establishment of a new political party.

However, for observers such as Amna Guellali, deputy regional director for the Middle East and North Africa at Amnesty International, there isn't so much a government campaign against a free press as there is a closing off of room for dissent.

"It's not just about Drareni," she explained, "it's about free speech in general. When the government closes a website within Algeria, people don't always have the time or the understanding to access the same information from a foreign country through a VPN."

Moreover, despite the free flow of information promised by the internet, it appears that Algeria's efforts to gag its public critics before protests can resume appear to be working.

"Algeria has escalated the level of repression," Guellali continued. "The level of persecution we're seeing against members of the Hirak is unprecedented."

By stifling critical voices ahead of November's referendum on constitutional reform and before the potential resumption of mass unrest following the pandemic, the government may have bought itself time. However, without addressing any of the Hirak's core concerns, it’s uncertain whether this extra time will prove useful.