Outrage as Algerian journalist sentenced to three years in prison

Human rights groups around the world are aghast at the harsh sentencing of independent Algerian journalist Khaled Drareni, who has become a freedom of speech icon. 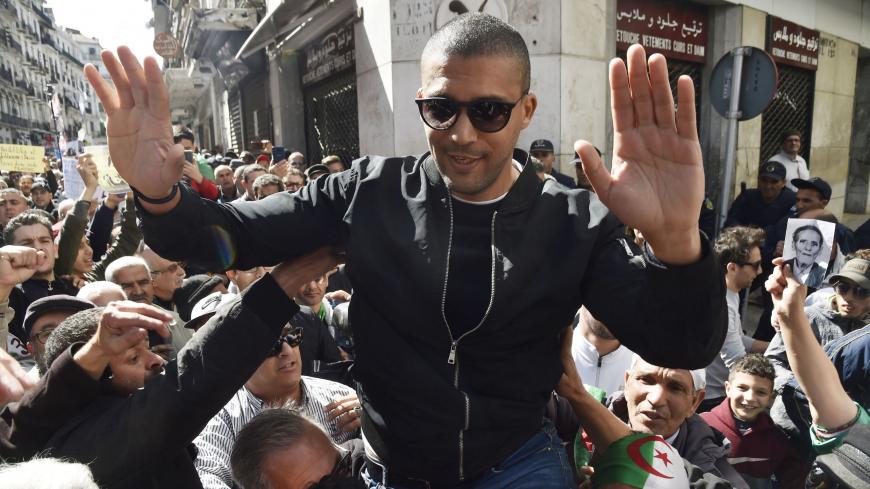 A picture taken on March 6, 2020, shows Algerian protesters carrying journalist Khaled Drareni on their shoulders after he was briefly detained by security forces in the Algerian capital Algiers. - RYAD KRAMDI/AFP via Getty Images

Algerian journalist Khaled Drareni was sentenced yesterday, Aug. 10, to three years in prison, convicted of inciting unauthorized demonstrations and attacking national unity. Drareni will also pay a fine of 50,000 dinars ($390). Two Hirak activists arrested with him — Samir Benlarbi and Slimane Hamitouche — were sentenced to two years in jail each.

The ruling shocked many in Algeria and around the world. “It’s a very heavy verdict for Khaled Drareni. We are surprised,” Drareni’s lawyer and president of the Algerian League for Human Rights Nouredine Benissad told the press. Dozens of journalists and activists in the Hirak movement demonstrated outside the courthouse in Algiers, chanting “Free Drareni.” Many of them could not hide their emotions when Drareni’s lawyer came out of the courthouse to announce the verdict.

Drareni, 40, worked for years as independent journalist for the French TV5 Monde, with RSF and for other media outlets. He was also the editor of the local Casbah Tribune news site and was very active on social media, with 147,000 followers on Twitter. Covering the Hirak pro-democracy protests was probably his biggest project.

The saga of his arrest and conviction began at the beginning of March, when he was detained by police after covering a Hirak march. He was later released, only to be arrested again on March 29. "For the authorities, for this system, an independent journalist is a criminal. So I would rather be a free journalist and a criminal. I will continue with my journalistic work completely independently and free," said Drareni on Aug. 10, during the short period between the two detentions.

Human rights groups from all over the world have campaigned for Drareni’s release and many Algerians consider him a free speech icon. He himself has always denied the charges against him, insisting that he was only doing his job and fulfilling his mission as a journalist. Still, Drareni was not surprised by the arrest, which came only days after prominent opposition leader Karim Tabou was sentenced to a year in prison.

Civic groups in Algeria note that in the past few months and despite the toppling of the country’s President Abdelaziz Bouteflika, opposition activists and members of the Hirak movement are being increasingly detained. Journalists and bloggers suspected of sympathizing with Hirak are also harassed by the authorities. On April 27, a Setif court detained blogger Walid Keshida for posting caricatures on Facebook. The prosecution accused Keshida of blasphemy and insulting state symbols. On June 12, Algerian police arrested Merzoug Touati, a reporter for the news website L’Avant-Garde. Touati, like Drareni, was covering anti-government protests in the city of Béjaïa.