Algerian courts use cover of pandemic to reverse protesters' gains

Reforms sought by Algeria's Harek, or mass movement, are "stillborn" as a result of the COVID-19 pandemic. 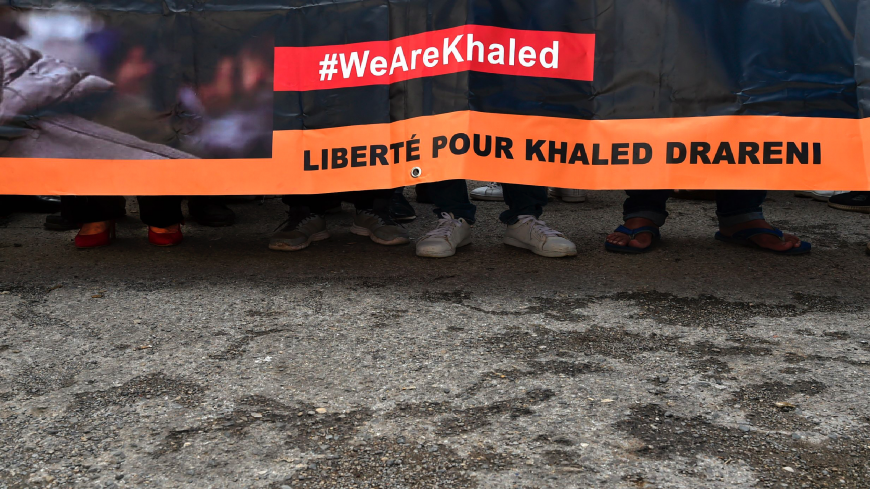 Algerian protesters lift a banner that says "freedom for Khaled Drareni" during a weekly rally to call for the release of the jailed journalist and express support for press freedoms, in the capital, Algiers, on Oct. 12, 2020. - RYAD KRAMDI/AFP via Getty Images

With the coming of the coronavirus pandemic, protesters who once thronged Algeria's city centers in the hundreds of thousands have vanished. In their absence, state power is reasserting itself.

Through 2019 and the early months of 2020, Algeria's mass protest movement, called the Hirak, made stunning gains when it took to the streets in opposition to the stifling bureaucracy and endemic corruption of the opaque cadre — or pouvoir — of military leaders, trade unionists and business elites surrounding the office of the president.

Over the space of months, pressure from the street brought around a president's resignation, dramatic arrests among the country's senior political hierarchy and the promise of dramatic, far-reaching reform.

Under the cover of a global pandemic today, many of those reforms remain stillborn, while observers point to the use of the courts and curbs on freedom of speech to reverse engineer the Hirak's gains.

In recent weeks, activists such as 25-year-old Walid Kechida have found themselves arrested; Kechida was sentenced to three years imprisonment in early January for social media posts insulting both the president and Islam. In September, Algerian journalist Khaled Drareni was sentenced to two years on appeal for “inciting an unarmed gathering” and “endangering national unity” as part of his coverage of the protests.

Algerian authorities have arrested 21 journalists for their coverage of the Hirak since early 2019. Three of the country's online newspapers — Interlignes, Casbah Tribune and TSA — have also been blocked and are now only accessible through a virtual private network.

In December, the government announced a clampdown on electronic media, passing a law requiring all web-based Algerian media to be based within the country, as well as requiring publishers to inform authorities of any illegal content, a move slammed as "absurd" by many media professionals.

Concurrent to the online clampdown, other moves appear to be underway, In the first days of the year, the former president's younger brother, Said Bouteflika — long seen as the real power behind the throne — along with Gens. Mohamed Mediene and Athmane Tartag, were acquitted on conspiracy charges, returning the two controversial generals to public circulation. Nevertheless, Bouteflika remains in custody awaiting trial on corruption charges.

All the while, with police now a presence throughout public life and the economic realities of both the economic downturn from the fall in oil prices combined with the continued worst of the pandemic, the mood on the street is uncertain.

Algiers-based journalist Akram Kharief outlined the public reaction to Kechida's jailing, sketching out the anger over the heretical nature of his posts combined with genuine concern over the state's continued encroachment on the internet. Nevertheless, he cautioned, despite the pandemic, social and economic anger is growing.

Despite the human toll, health protocols are proving advantages to the regime. With public gatherings banned, Kharief described near dystopian scenes where "… people are literally fighting to feed their kids." He added, "The police [are] everywhere in the public space and in cyberspace, and it is hard to federate views and opinions publicly."

"The regime is denying any basic expression to anyone not agreeing with the president's roadmap," Kharief continued. "We have seen that more than 100 people were arrested during this sanitary crisis because of politics," he told Al-Monitor.

But concerns over any overarching strategy being deployed to use the courts to silence the opposition were likely overstated, some observers cautioned. Rather, circumstances suggested the regime was targeting individuals, such as Drareni, and then searching for whatever tools may be available to silence them, said Ahmed Benchemsi, HRW's Communications Director for the Middle East and North Africa.

Moreover, Benchemsi explained, the recent absence of public protest should not be interpreted as acquiescence. Instead, a better indication of the public mood could be drawn from the historically low turnout for November's much-vaunted constitutional reforms.

In the build-up to the referendum in early November, Algeria's political hierarchy made great play of the amendments — increasing parliamentary power and limiting presidential terms — as an answer to the demands of the street. In the end, turnout was at a historic low, with less than a quarter of the electorate showing up to vote.

"Turnout was really low," Benchemsi said. "This, despite the massive encouragement to vote, speaks volumes."

And while the regime may have no need for prominent individuals, the same is equally true for the opposition. From the outset, the Hirak eschewed the need for any identifiable leadership, meaning the current round of unrests are unlikely to do much to temper any outpouring of popular anger if it comes.

"The street is unhappy. The anger that fueled the protests hasn't really dispersed," Benchemsi said. Referring to the example of neighboring Tunisia where a police beating over a straying sheep in mid-January kickstarted a wave of protests, he continued, "You never really know where it's going to come [from], who it might be or where it may lead."