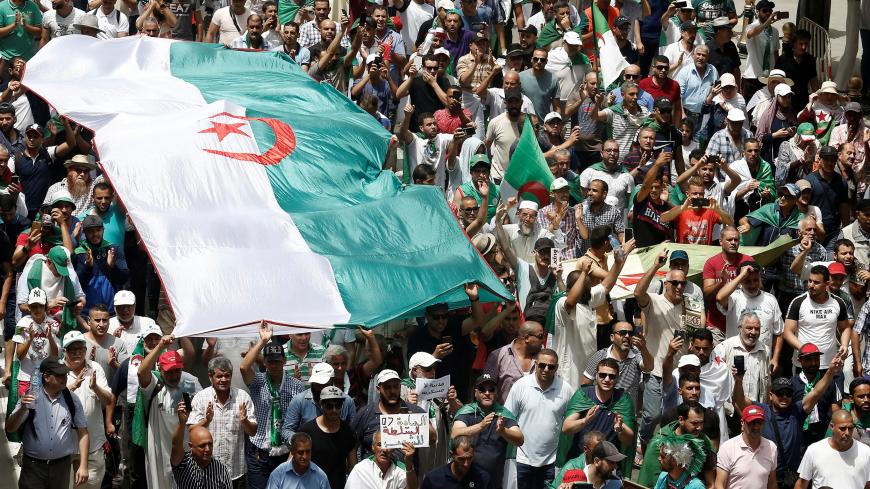 Demonstrators carry banners and flags during a protest demanding the removal of the ruling elite in Algiers, Algeria, July 5, 2019. - REUTERS/Ramzi Boudina

Algeria’s popular protests, or Hirak, entered their 20th week on July 5, combining the resentment that has fueled dissent through much of the year with the anniversary of the country’s hard-won independence from France in 1962.

The achievements of the Hirak have been as unexpected as they are unparalleled. Spurred by the announcement that infirm President Abdelaziz Bouteflika would seek a fifth term, the peaceful protests forced Bouteflika's resignation in the first days of April. This was followed by the arrest of members of his circle on corruption charges and the postponement of the country’s elections. However, as civil authorities crumble in the face of popular anger, another figure has come to the fore. Gaid Salah, the chief of staff of the army, has assumed the public face of the embattled regime over caretaker President Abdelkader Bensalah.

Thousands of demonstrators flooded the streets of Algerian cities July 5, with some carrying placards proclaiming, “Yes to a civilian state! No to a military dictatorship." Nevertheless, in the face of an increased security presence throughout Algiers, they marched on, dismissing the offer of a weakened Bensalah for a national dialogue. Bensalah's temporary mandate was extended beyond its constitutional limits on July 9. The state and army have remained neutral, declaiming, "No dialogue with traitors."

“Since Bouteflika's removal, Gen. Ahmed Gaid Salah has been the true center of power, not interim President Bensalah or Prime Minister [Noureddine] Bedoui,” Sharan Grewal of the Brookings Institution told Al-Monitor. “They are simply figureheads designed to put a civilian face on the real power broker.”

Any ambiguity over Salah’s position was resolved with the June 30 arrest of Lakhdar Bouregaa, an iconic veteran of the Algerian war of indepenence. Bouregaa’s mistake, according to his grandson, had been to accuse Salah of seeking to impose his own candidate upon any future election.

Though Bouregaa’s arrest is unusual, it is by no means isolated. Ever since Bouteflika’s resignation, authorities have swooped in to arrest prominent businessmen and public figures close to the former president. The latest to be arrested is Algeria’s former police chief, Abdelghani Hamel. State television announced on July 5 that he had been taken into custody with members of his immediate family to face charges of “diversion of funds and illicit enrichment.”

“These are unprecedented moves," Grewal continued, "and the Hirak is due all the credit for putting intense pressure on the regime. The regime is hoping that these arrests and resignations will satisfy the Hirak, but the protests show no sign of letting up. At this rate it's just a matter of time until the 2Bs — Bensalah and Bedoui — are also removed.”

The Hirak appears unstoppable, with predominantly conscript soldiers reluctant to deploy force against the large cross sections of society mobilized against the regime. Sowing division is one of the few remaining options for the Algerian state. For example, a June edict bans the Amazigh, or Berber, flag — a flag that, along with the national flag, is considered a symbol of the protest movement's defiance. Forty-one protesters have been arrested for carrying or possessing the flag so far, with further flags confiscated from protesters entering Algiers on July 5. Many believe the "pouvoir," or the country's power structures, are exploiting the presence of the Berber flag among protesters to sow discord among an otherwise unified protest movement.

As the Hirak advances, some observers warn that, beyond creating division, Algeria’s regime was running out of options. “I think there’s a risk that, like with [French President Emmanuel] Macron, if you keep giving in, protesters will keep demanding more concessions,” Jonathan Hill, a professor at King's College London, told Al-Monitor. However, regardless of the protesters’ demand that any election be undertaken by an entirely new body, a future vote would still hold both possibility for the protesters as well as an opportunity for their opponents, irrespective of its orchestration.

“I think, so far, Gaid Salah’s played a pretty clever hand," Hill said. "However, if there’s a chance he hopes to swing the elections his way, which is in his interests to do, he’s going to need to act fairly shortly. As we know, there are countless ways of manipulating elections, but it can’t be ignored that the next vote will receive an unprecedented level of scrutiny. The international community is going to be all over them. So anything Gaid Salah or the regime want to do to skew them, they’ll need to do now. Essentially, they’re going to need to get all their ducks in a row before the vote takes place.”

For now, reinvigorated by both the apparent weakness of their opponents, as well as an undeniable sense of momentum, the Hirak presses on. The impact of the protests has been undeniable. However, the ultimate outcome remains unclear.