Algeria's presidential election no one wants

After hounding longtime dictator Abdelaziz Bouteflika from office, protesters are now campaigning to stop the flawed process to replace him. 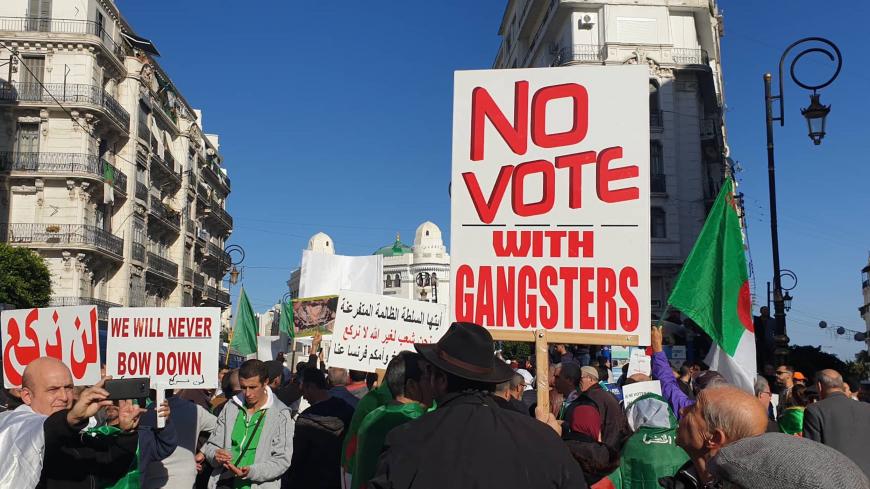 Demonstrators take part in a protest to demand the presidential election scheduled for next week be canceled, in Algiers, Algeria, Dec. 6, 2019. - Al-Monitor/Ghada Hamrouche 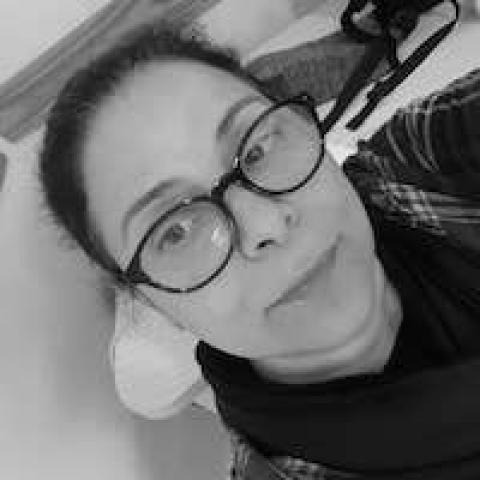 What do Algeria's five state-approved presidential candidates want most of all? For Sunday to arrive as soon as possible and the electoral campaign that only began Nov. 17 to finally be over.

The bizarre race is the inevitable outcome of an even stranger political climate in which the powers that be are determined to replace deposed President Abdelaziz Bouteflika next Thursday despite widespread public opposition. Heavy police protection around the candidates and steep penalties — 18 months in prison for anyone accused of disrupting the electoral process — have failed to dissuade protesters from jeering at the candidates in almost every town in which they've campaigned.

Those who have been arrested are considered heroes by Hirak, the popular movement that wants to get rid of the old regime altogether. In the western town of Tlemcen, protesters massed under the prison's walls and chanted the names of four of their condemned companions.

By contrast, the campaign events of the five candidates — Ali Benflis, Abdelaziz Belaid, Azzedine Mihoubi, Abdelmadjid Tebboune and Abdelkader Bengrina — have largely been shunned by Algerians. Town halls ostensibly aimed at convincing would-be voters are taking place in front of carefully selected audiences in closed rooms teeming with security; the real spectacle is outside, where hostile protesters make their disgust for the candidates and the process.

Tensions have only increased ahead of election day as a large portion of Algerians have entered into peaceful dissidence against a regime that sees the poll as synonymous with a return to “normal.”

The 79-year-old army chief of staff, Lt. Gen. Ahmed Gaid Salah, has concentrated all power into his hands and is imposing his choices while multiplying vehement speeches against any and all opponents. After initially backing Bouteflika's bid for a fifth mandate that triggered mass protests, Gaid Salah has since turned against the former president's clan, which he derides as a “gang.”

The military man has notably launched a “clean hands” operation that has already seen the incarceration of former prime ministers Ahmed Ouyahia and Abdelmalek Sellal as well as several ministers and businessmen. And in September, a military tribunal sentenced four people — the former president's brother, Said Bouteflika; former intelligence chiefs Athmane Tartag and Mohamed “Toufik” Mediene; and leftist Workers Party leader Louisa Hanoune — to 15 years in prison for “plotting against the army.”

The army chief reckons those measures should have been enough to placate the protesters. And maybe in another era, the theatrical staging of corruption trials for regime dignitaries such as Ouyahia and Sellal would have satisfied the street.

But the Hirak movement that rose up against Bouteflika in February is different. With no centralized leadership, protesters are massing every Friday (and students on Tuesday) to peacefully seek not a change of leaders, but of system. Their main slogan, “Dawla madaniya machi askraiya” ("A civil state, not military"), sums up their demands.

Meanwhile, the gulf between the army brass and the street is growing dangerously deep.

Gaid Salah sees protesters’ demands as a “plot” against an army that won independence from France and defeated an Islamist insurgency in the 1990s. But for many if not most Algerians, the goal is to end the co-option of presidents by the army and finally put citizens in charge of deciding who should hold power.

Tellingly, the five candidates never address this central question, reinforcing protesters’ suspicion that the fix is in and the system is meant to continue functioning as it always has, regardless of which figurehead wins.

After the cancelation amid public pressure of two previous elections initially planned for April 18 and then July 4, Gaid Salah was able to impose the Dec. 12 date. After a sham dialogue, electoral authorities cleared five candidates who are all part of the widely reviled system: former prime ministers Benflis and Tebboune; former ministers Mihoubi and Bengrina; and Belaid, a former apparatchik of the ruling National Liberation Front who has now formed his own party.

The lackluster campaign is good enough for Gaid Salah, who has drawn a line in the sand on holding next week’s poll. But the day after may well prove that the election will resolve nothing and that Algerians will refuse to return to the way things were before their Feb. 22 revolution.

Algeria’s electoral participation rate is low in general. It’s expected to be even worse in a race characterized by minimal consensus, high levels of repression and government-aligned news coverage except for a few online outlets.

Despite the country’s financial woes, the regime has not hesitated to woo voters with costly populist measures such as the creation of new administrative divisions, the extension of a metro line and allowing individuals to directly import used cars. The charm offensive doesn’t appear to be working.

Algeria may well have a new president after Thursday evening — maybe even one with a decent level of apparent support if the participation rate is doctored as has been the case in the past. But the next day, expect protesters to be back in the streets in force just as authorities announce the results.

The crisis will remain unresolved. Popular demonstrations will continue. But what form will they take? That is the question.