Protesters in Algeria rejected the presidential election and its victor, Abdelmadjid Tebboune. 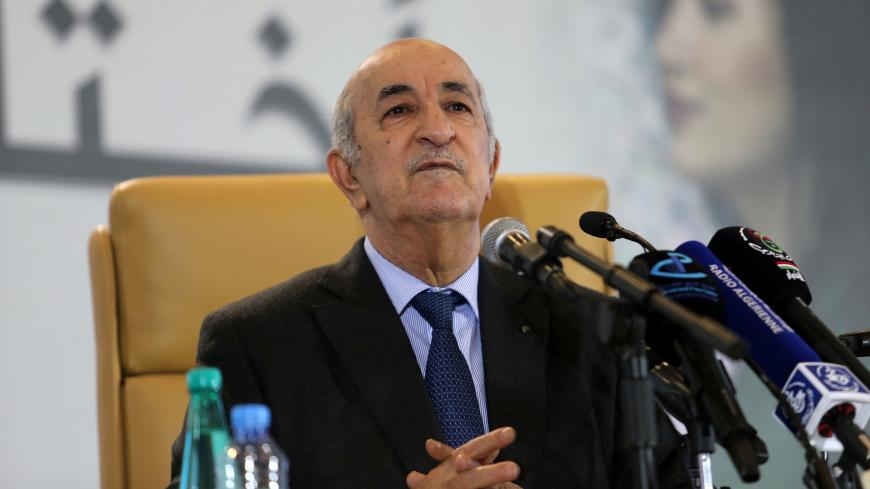 Few were surprised when 74-year-old Abdelmadjid Tebboune won Algeria’s Dec. 12 presidential election. With his campaign set amid overwhelming public anger, Tebboune secured more than 50% of a vote marred by record low turnout and public resistance. Nevertheless, his majority was enough to avoid a potentially damaging runoff and an extension of a tumultuous chapter in Algeria’s recent history.

Algeria’s protesters, who for months have turned out in the thousands every Friday, voiced opposition to what they saw as an intrinsically corrupt poll. All five presidential candidates were from the country’s political establishment, which demonstrators see as enjoying an opaque relationship with a cabal of senior army officers, trade unionists and businesspeople, known collectively as the pouvoir.

Hopes that Tebboune’s election could draw a line under this volatile period may prove ill-founded. The day of the vote was marked by countrywide mass protests, with demonstrators causing a number of polling stations to close. The announcement of Tebboune’s victory the following day did little to quell public anger.

While major confrontation was avoided, the police still employed heavy-handed tactics in response to the protests. In Algiers, as the polls opened, an older woman was bundled into the back of a police van after talking to a Western journalist about her decision to not vote. In the northwest city of Oran, the Algerian League for the Defense of Human Rights reported that 400 people were arrested over the course of the election.

“I cannot accept this vote because I do not recognize the corrupt system,” Salim Rahmoun, 27, told Reuters Dec. 13.

“I know that security services are monitoring a lot and being very active on the ground when [there is] a demonstration,” one protester told Al-Monitor. “The usual human rights activists, members of the Committee for the Liberation of Prisoners [known by its French acronym CNLD, which serves as a bridge between the families of those arrested and the legal system] or those with a Berber separatist tendency are really followed closely.” The source added that those under surveillance are arrested at any opportunity.

“I think these people will gradually be accused of manipulating the Hirak," the source added. "The idea behind that is to reduce the base of the movement and denounce it as ‘extremist.'"

The day he was named president, Tebboune was keen to be seen reaching out to the protest movement, or Hirak. “I address directly the Hirak, which I have repeatedly blessed and supported, to extend my hand for serious dialogue with them, for the sake of Algeria and only Algeria,” he said.

Tebboune also promised to free protesters who were unfairly arrested during the course of the Hirak. In addition, he committed to continue the prosecution of former President Abdelaziz Bouteflika’s inner circle, members of which were arrested and charged with corruption as part of a purge initiated by army chief Ahmed Gaid Salah, who has emerged as a high-profile player throughout the protests.

In the leadup to the vote, Tebboune’s pitch focused on his credentials as an anti-corruption candidate, having been dismissed as prime minister in 2017, after just three months, when he confronted a number of corrupt businessmen. Nevertheless, Tebboune still enjoyed a close relationship with Bouteflika and oversaw a number of ministries. Also, as the demonstrators have pointed out, his son is among those awaiting prosecution on graft and narcotics charges.

While Tebboune has tried to distance himself from Bouteflika, it's open to debate how much his election will mark a departure from the old regime. Gaid Salah, a bete noire of protesters, remains in place. With that, observers suggest little of material value has shifted.

“The elections have not changed much, since they were widely rejected by the protesters,” Sharan Grewal, a visiting fellow at Brookings, told Al-Monitor. “Protests will continue at the same size if not larger, and will simply replace chants against interim President [Abdelkader] Bensalah with President-elect Tebboune. The presidential election simply recycled the civilian facade, nothing more.”

Tebboune’s election has not helped rehabilitate the country’s international reputation, with French President Emmanuel Macron issuing a lukewarm reaction to his victory. Macron simply acknowledged the victory Dec. 13, saying, “Dialogue must start between the authorities and the population.”

“Tebboune, like Bensalah, is unlikely to have much international legitimacy,” Grewal continued. “Macron's statement today is likely representative of what we will see: The election will be ‘noted’ but not praised, and the new president will be called upon to release political prisoners and initiate a dialogue with the Hirak.”

Yet Tebboune also faces domestic challenges. Algeria remains hugely dependent on hydrocarbon exports, the returns on which have diminished as domestic demand has grown, a significant factor underlying the protests. There is also the 9% cut in government spending for next year’s budget, which will likely affect many of those who gather weekly in the country's city centers.