With the postponement of presidential elections in Algeria, the political class has ignored the constitution, undermining the credibility of interim President Abdelkader Bensalah and the influence of army chief Gen. Gaid Salah. 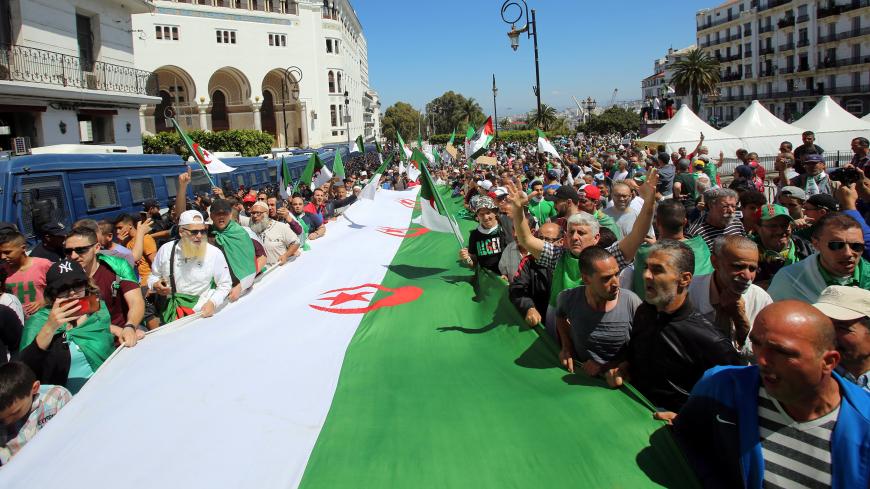 TUNIS — Thousands of Algerians returned to the streets on Friday, June 7, buoyed by the decision of the Constitutional Council to cancel presidential elections scheduled for July 4. A new date has not, however, been set.

This latest concession to the Algerian street has provided further impetus to the popular protests that have rocked the country’s political class. With the postponement announced June 2, Algeria’s elite has essentially positioned itself beyond the reach of the constitution it has clung to throughout the unrest, which began in mid-February. Moreover, by doing so it appears to lend additional credence to protesters’ calls for a new electoral committee to oversee a fresh vote.

The deviation from the constitution represents a significant breach for a government that claims its legitimacy to be founded upon the document's bedrock, even though it has shown little regard for it when refashioning its provisions according to its electoral needs, amending it to suit presidential terms in 2008 and 2016. By breaking with precedent, however, Algeria’s elite, including the interim president, Abdelkader Bensalah, and army chief Ahmed Gaid Salah, have lent fresh urgency to protesters’ calls for the government’s exit from the political stage and the establishment of an independent electoral commission, free from the allegiances that have skewed the results of past elections in favor of the ruling class and are widely understood to be ready to do so again.

For some, the motives behind the cancellation of the elections are evidence of the elite’s desperation, amounting to little more than political sleight of hand in attempting to satisfy the protesters' demands for reform while stopping short of conceding to the full scope of those demands. “It’s not a real solution,” Khalil Che, a protester from the port city of Oran, said to Al-Monitor. “They’re just trying to fool the population.”

Che further stated, “The Hirak [popular movement] will continue. We’re against Gen. Salah. It’s clear that it’s the army who governs. It’s them who appear on TV and propose solutions, [not the politicians].”

“The protesters welcome the cancellation of the elections, not necessarily the extension,” said Sharan Grewal, of the Brookings Institute. “Their argument is that they do not want elections if they are run by the Bouteflika regime with no guarantees that they will be free and fair. Whether that occurs July 4th or at some later date, that is unacceptable.”

Grewal further observed, “Before elections, the protesters want a change in the transitional government and guarantees that elections will be credible, some may even want a revision of the constitution prior to any elections. The precise sequencing will need to be sorted out through negotiations with the regime, but a simple extension of the previous roadmap will be unacceptable.”

Algerian elections, not least their results, have long been a source of popular chagrin. “In the past, the Ministry of the Interior was charged with organizing elections,” said Amine Hocine, a freelance Algerian journalist, noting that this automatically undermined any claims of neutrality. “The governors [and] mayors received orders to rig elections, either by helping candidates collect signatures or by inflating participation rates for more legitimacy, or [they] gave more votes to one candidate or one party at the expense of another.”

By deferring July’s poll, the government has essentially ceded Hirak time to further organize. Hocine stressed that the protesters have been calling for the establishment of an independent body to organize and supervise elections, not to simply orchestrate them. He told Al-Monitor, “[They want a] committee that supervises the whole electoral process, from voter registration and acceptance of candidacies to the voting process, counting and announcement of results.”

Life under the unelected Bensalah was never going to be smooth. “Bensalah is popularly rejected,” Hocine maintained. “He spent 40 years in parliament as a member and then as a president of the House of Representatives, without contributing to the establishment of an independent parliament.”

Furthermore, despite the various government positions that Bensalah has held, at no point has he shown real appetite for reform. Hocine remarked, “I think that these reasons [are] enough to reject Bensalah and demand his dismissal.”

Nevertheless, postponing the elections grants the popular movement time to possibly reach agreement on representation. A number of prominent figures have established themselves at the forefront of the movement, among them the opposition figures Mustapha Bouchachi and Karim Tabou and the academic Fares Mesdour. No single individual will likely be able to represent everyone, Grewal said.

“The regime can no longer impose its preferred road map under the guise of following the constitution,” Grewal told Al-Monitor. “It can try to extend the old road map, but extending past 90 days is unconstitutional. To create a road map with any legitimacy it will now have to negotiate with the protesters.”

That said, as demonstrators massed in the thousands for their 16th consecutive Friday of protest, there appeared to be little appetite for compromise, at least in Oran. As Che put it, “We lost some people during Ramadan, but from tomorrow [June 7], it’ll be stronger than ever. We have the solution that people want, and we’ll continue. We’ll never be stopped.”