Algerians protested the decision to hold elections in December as their demands are left unmet and many activists and opposition members linger in jail. 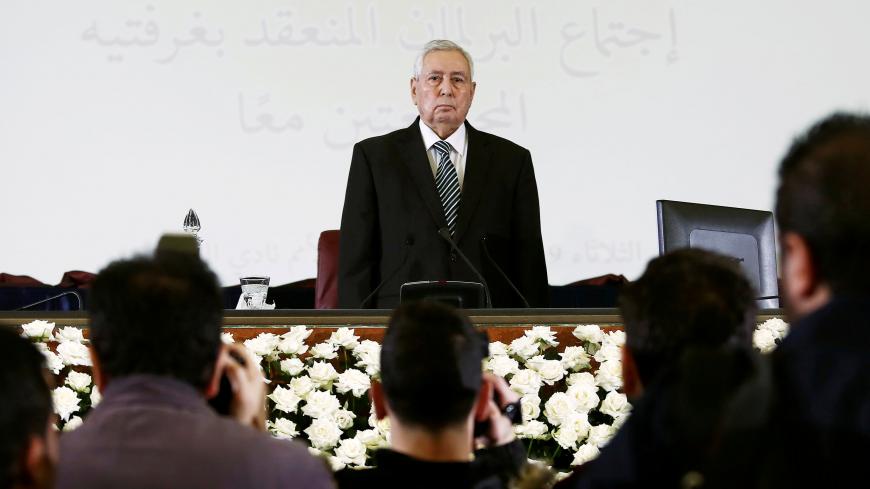 After more than 30 consecutive weeks of demonstrations and political stalemate, all indications are that Algeria’s ruling elite is preparing to call time on the protest movement, the Hirak, which ended the rule of a longstanding president and the careers of scores of highly placed politicians and officials.

Establishment attitudes have been hardening for some time toward the protests, which been led by young people for the most part, with arrests growing in number and the occasional skirmishes between security forces and demonstrators increasing in frequency.

In the face of a barrage of discordant voices calling for the ouster of the government and the establishment of a fresh electoral body, acting President Abdelkader Bensalah announced new elections for Dec. 12. Bensalah’s call came after the army chief, Gen. Ahmed Gaid Salah, insisted that polls go ahead in 2019. Salah is a bete noire for many within the protest movement.

The reaction from the street was almost instantaneous. On Sept. 17, Algerians rallied by the hundreds, chanting, “We will not stop our protests” and “Civilian state, no military state,” as well as calling for the resignation of both Bensalah and Prime Minister Noureddine Bedoui, a move suggested last week.

Protester Khalil Che of Oran told Al-Monitor that throughout their demonstrations, the Hirak learned the value of peaceful protest, while the regime used the same tactics as of old. “They will hold elections alone,” he said. “No one in this country wants their elections. We want new elections, yes, but on our terms.”

Imposing a vote upon the people, he said, was unlikely to end well. “We will go out peacefully in huge numbers to protest their elections. All those things they do, like criminalizing people, taking them to jail, it’s how they think. It’s like old times. This will not stop us. We still say no to elections with this mafia. There is nothing that will stop us. Nothing will change our opinion.”

Despite the pushback from the street, the appetite for compromise that had previously typified the government’s response to the Hirak appears to be diminishing. Protesters are arrested routinely by the security services every week. An independence war veteran, 86-year-old Lakhdar Bouregaa, remains in prison after being arrested in June on charges of insulting the army after he publicly criticized Salah. On Sept. 11, prominent opposition figure Karim Tabou was arrested in front of his home on charges of undermining the army after he accused Salah of seeking to “close the game.”

Freelance Algerian journalist Amine Hocine said, “While the Hirak aims to radically change the regime, the imposition of presidential elections is a first step for restoring the regime by only renewing its civil front.”

Hocine said the move to accelerate the electoral process hopes to wrong-foot the protest movement and maintain the military’s grip on power “because the commander of the army is not ready to make any concession; he wants to appoint a president who ensures continued military control of politics, rather than a democratic transition.”

With both the Hirak and the government, in the shape of Salah, claiming to be the sole defenders of democracy, Hocine said compromise was unlikely. While the regime insists on organizing elections in the name of democracy, he said, “They arrest bloggers and prosecute activists using the politicized judiciary, in addition to placing restrictions on demonstrations against the army and government leaders, and controlling the press and media, which now glorify the army and the chief of the army in the same way they used to glorify the deposed president.”

Chloe Teevan of the European Centre for Development Policy Management said, “I think Gen. Salah’s gambling that things will ultimately go his way. I think he feels he’s done enough for observers to say that he was open to compromise, but now he’s forging ahead with elections.”

For all intents and purposes, the Algerian state had already switched into election mode, regardless of whether the nation was in agreement. To that end, Teevan said, state actors are adopting a dual approach of repression aimed at quelling the opposition and economic concessions aimed at buying support.

“On the whole, many protesters were initially glad that foreign actors kept their distance,” Teevan said. “However, now there’s an increasing desire within the movement to at least hear some mention of the human rights abuses they’re suffering.”

For policymakers in Europe, however, the Algerian protests represent a Pandora’s box best left unopened. For years, the country has maintained its stability, providing gas and hydrocarbons to European markets and serving as an effective bulwark against potentially destabilizing immigration.

However, the present is not without opportunity. “If Algeria can transition to a proper functioning democracy, not a military state — or the kind of strange quasi-democracy we’ve seen in the past — it stands a better chance of achieving long-term stability and economic transformation. If it could do that, the success would be considerable, potentially setting up Algeria as an African giant and a destination for inward migration,” Teevan said.

However, for now — as it has been for the past five months — Algeria remains poised at a crossroad. Which way it will go will become clear over the next few weeks.

by Murielle KASPRZAK and Joseph SCHMID | AFP | May 26, 2022
END_OF_DOCUMENT_TOKEN_TO_BE_REPLACED