Algeria’s government and protesters on track for collision

Algerian protesters are stepping up pressure against the ruling regime as the Dec. 12 elections near, with complete rejection of the candidates. 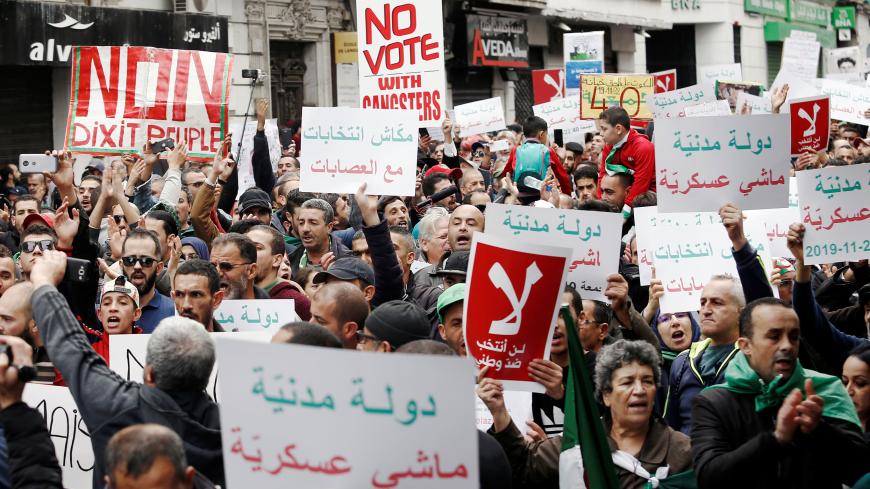 TUNIS, Tunisia — Demonstrators from across Algeria flooded the country’s streets Nov. 22, maintaining the pressure of the mass peaceful protest that began in February and has so far unseated one long-serving president, pushed back national elections and led to the arrest of scores of government ministers.

However, as protesters with the popular movement, or hirak as it has been termed, march on, so too do the plans of Algeria’s army and caretaker government to stage controversial presidential elections Dec. 12.

For the caretaker government of interim President Abdelkader Bensalah and his allies within the army, elections represent an opportunity to renew the mandate of the system that has preserved their rule for decades. For protesters, the prospect of new elections promises little but the continuance of the reign of the shadowy clan — or pouvoir — of businessmen, army officials, unionists and politicians they regard as having looted their country for generations.

In Algiers on Nov. 22, Algerians in their thousands marched, many wrapped within the national flag, chanting, “We are not interested in your vote.” One, Farid Djemai, told the news agency, Reuters, from his wheelchair, “We are determined to win in the struggle. We have reached the point of no return.”

However, the interests and forces arrayed against them are significant. Moreover, as the election date moves intractably closer, there is little indication that either the interim government or its principal ally within the military, army chief Ahmed Gaid Salah, are ready to negotiate any further.

The five candidates running in the December election hardly represent the dramatic break with the past the street has been calling for. Former Prime Ministers Abdelmadjid Tebboune and Ali Benflis are both candidates in the vote. Also running is former Culture Minister Azzedddine Mihoubi, former Tourism Minister Abdelkader Bengrine and Abdelaziz Belaid, head of El Mostakbal Movement party.

For Algerian freelance journalist Amine Hocine, the continuance of the demonstrations is evidence of the depth of popular resistance to the proposed elections. “The five presidential candidates face difficulties on the ground during their election campaigns; most of their gatherings and activities are being monitored and secured by the police forces, due to the state of popular rejection,” he told Al-Monitor.

Across Algeria, garbage bags and posters of detained opposition figures have been plastered over areas reserved for election material. In mid-November, Human Rights Watch reported that scores of protest leaders has been detained on charges as spurious as such as “harming national unity” or “undermining the morale of the army.” The rights group linked the arrests to the upcoming elections.

“The reason for the rejection (of the elections) is that some candidates remained attached to the [Abdelaziz] Bouteflika regime until the end and belonged to political parties that have always been part of a system of corruption and fraud,” Hocine said. He said that ultimately, the vote represents not so much the selection of a new president but rather “a political system that wants to renew itself through elections, while the movement wants to get rid of it.”

“The Algerian regime has long appropriated the various technologies of power associated with democratization,” Thomas Serres, a social scientist at the University of California, Santa Cruz, told Al-Monitor. “Under Bouteflika, it [the regime] has weaponized the process of democratic consolidation to foster stability and obedience. Each election was a way to demonstrate the ‘modernity’ of the system and to co-opt new actors.”

However, by doing so, Algeria’s governments have essentially poisoned the political well, including the reputation of the opposition parties, Serres said.

“The current grassroots mobilization is partly modeled in response to this instrumentalization of the norms of liberal democracy. Yet, the regime continues to operate without taking criticism into account and by relying increasingly on its bureaucratic-military core. It pushes for these elections even if the process itself has no legitimacy, as if it was a way to simply overcome the hirak and return to a new status quo without Bouteflika,” Serres said.

Increasingly, calls for the founding of a second republic and the kind of Constituent Assembly championed by the largest of the opposition forces, The Pact for the Democratic Alternative, are gaining ground, Serres said. “They rightfully consider that the entire institutional framework has been discredited for too long to be salvageable,” he said.

There are just a little over two weeks now until Algeria’s elections. That turnout will be low is beyond dispute. However, without some sort of seismic political change, they appear destined to proceed, granting the pouvoir an extension to its reign, irrespective of popular rejection in the form of abstentionism.

However, for Serres, the real test for the hirak lies beyond the disputed election. “What will be the scale of the popular mobilization after election day and how will the regime react?” he asked. “Will foreign partners continue to tacitly support the Algerian regime for sheer economic opportunism? Which former minister of Bouteflika will be appointed by the army to endorse the role of president of the Republic?”