Algeria to vote in presidential poll amid crackdown on protesters

As Algeria’s presidential elections approach, protesters are taking to the streets to voice opposition to holding the vote before the protest movement’s activists are released from detention. 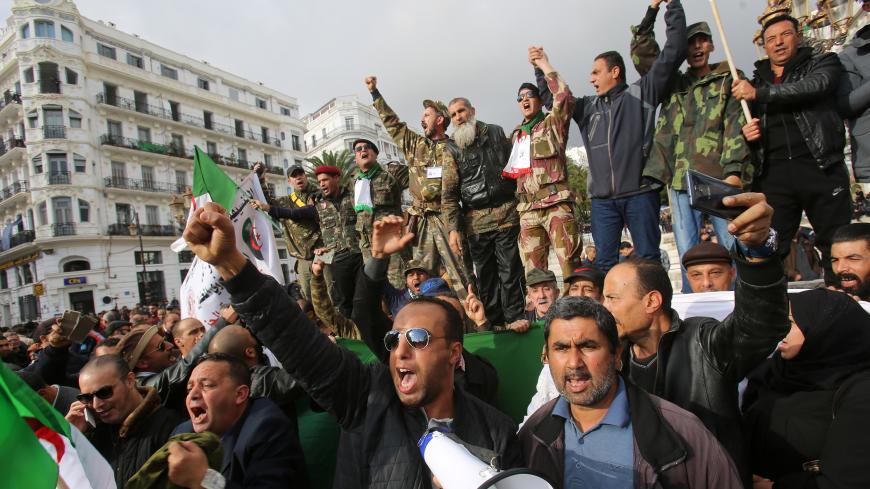 With the presidential elections just days away, Algeria’s embattled government is scrambling to imbue the Dec. 12 poll with a legitimacy that many in the streets across Algeria unequivocally reject.

In the last few days, prominent journalist Mahrez Rabia was dismissed from the national TV station for what many regard as his public support for Algeria’s protest movement, or hirak, which opposes the forthcoming elections. The pro-government General Union of Algerian Workers marched Nov. 30 in support of the December elections, while a televised debate between the candidates, intended to underscore the vote’s legitimacy, has been criticized for a lack of transparency by one of the organizations that was initially invited to help produce it.

Across Algeria’s television channels and print media, a broad campaign is underway to suggest widespread support for the December poll. Nevertheless, on Friday thousands of Algerians took to the streets, as they have for the previous 42 Fridays, to voice their unequivocal opposition to the vote.

“According to the national television network, everyone is supporting these elections, “ Tin Hinane El Kadi, a researcher at Chatham House, explained from the midst of Friday’s protest in Algiers. “They’ve co-opted much of the country’s print media, too, though that does remain freer. It’s insulting. People have social media. They know what’s going on and they know what the issues are,” she said.

Since the hirak’s inception in mid-February, following the announcement that former President Abdelaziz Bouteflika would seek a fifth term, the protest movement has made remarkable gains.

Fueled by growing resentment over the perceived corruption of an ingrained elite of businessmen, military figures, unionists and politicians referred to collectively as the pouvoir, what began as an initial response to an ailing president’s fifth term rapidly morphed into something larger.

Through Ramadan and the summer’s blistering heat, the hirak has marched and made progress. Further to forcing Bouteflika’s resignation, pressure from the street has led to the arrest of many within the former president’s inner circle on corruption charges and, critically, pushed back April’s original election date until a fair poll can be guaranteed.

Nevertheless, after months of demonstrations, the caretaker government of interim President Abdelkader Bensalah, urged by controversial army chief Ahmed Gaid Salah, regarded by many as the true power within Algeria, decreed that fresh elections would proceed on Dec. 12. The state mechanisms charged with overseeing that vote remain intact and the hirak continues.

“We’re not against elections,” Kadi explained. “We’re just against these elections.”

Kadi went on, “This was never just about getting rid of Bouteflika, this was about marking a sharp rupture with the past. Now all we’re being offered is the continuation of the civilian façade they can use to justify the old regime.”

“There are more than 300 members of the hirak still in prison, some whose arrests date back months. These aren’t just demonstrators, these are journalists, activists and war veterans. We need their release before we can even think about another election,” Kadi said.

While not as widespread as many protesting within Algeria might like, there has been international criticism of the December elections. Dec. 5, Amnesty International condemned the crackdown on protesters ahead of the poll. “Since campaigning for the presidential elections began, Algeria’s authorities have stepped up their assault on freedom of expression and assembly — signaling that they have little tolerance for Algerians calling for a change to the system,” Heba Morayef, Middle East and North Africa Director at Amnesty International, was quoted as saying.

As the date of the vote draws closer, it appears that little will be allowed that might challenge the perception of an open and fair election. Munathara, one of the organizations that proved critical in staging the widely praised pre-election debates in neighboring Tunisia, recently pulled out of the Algerian alternative.

“There was a complete lack of transparency,” Munathara founder and CEO Belabbes Benkredda told Al-Monitor. “As far as we were concerned, the minimum criteria for anything resembling a free and open debate hadn’t been met.”

Benkredda indicated, “At a very minimum, debates like this should involve a broad coalition of civil society, advocacy and activist groups. They can’t simply be the government deciding upon the topics and the questions with no right of reply, which was the case here.”

At this late stage, few are hopeful that the elections can be deferred once more. However, with turnout expected to be notably low, whichever of the five candidates are successful will then have to reach some sort of settlement with a protest movement that shows no sign of going away. Likewise, their election will also need the recognition of the international community that has so far proven itself more interested in looking the other way in return for the continued supply of hydrocarbons and the continued internal stability of Europe’s giant North African neighbor.

“A lot depends upon how the international community reacts,” said Jonathan Hill, a professor of international relations at King’s College London. He explained, “If they accept the result, as I expect they will, it frees the government’s hands. Once the vote has been recognized, we will likely see the kind of oppression that’s been avoided so far to begin.”