In addition to charges of nepotism and corruption among the ruling class, bleak employment prospects — particularly for youth — drove many Algerians to the streets. 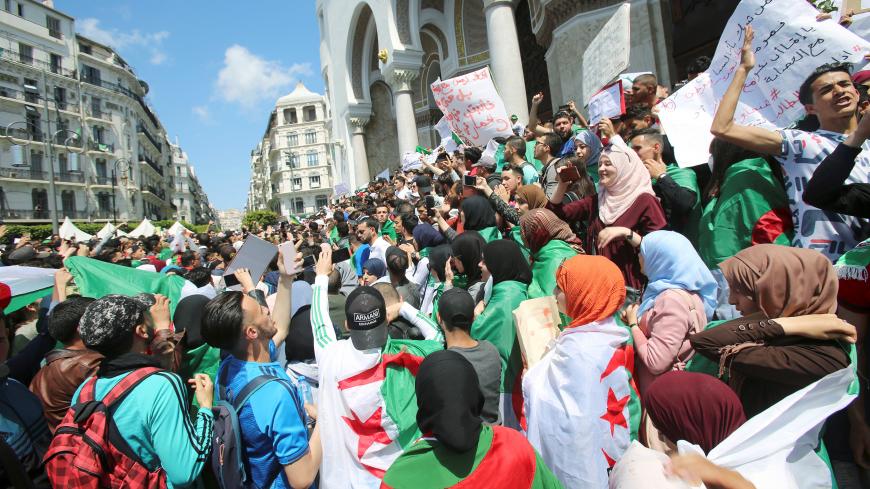 Students take part in a protest seeking the departure of the ruling elite in Algiers, Algeria, April 16, 2019. - REUTERS/Ramzi Boudina

After weeks of government climbdowns and policy reversals, the scale and pace of Algeria’s popular protest movement continues unchecked. Across Algeria, Fridays have become synonymous with protest, with cities grinding to a halt as the cars and shoppers that typically occupy the public thoroughfares make way for brightly colored banners, chants and security forces.

In their hundreds of thousands, the young have powered Algeria’s popular movement. Continuing to demand the clans, nepotism and ingrained power structures that have smothered their country for decades make way for a new generation of leaders, untarnished by the sclerotic corruption that has come to characterize the old.

That it is the young who have served as the engine of protest will surprise few. Caught up within the bulging birth rates that have subsumed the region, 54% of Algeria’s current population are under 30 years of age. Significantly, unemployment stands at 26.4% within that same group.

Beyond the country's already declining hydrocarbons industry, little opportunity exists for those seeking work outside the energy sector. Last year, nonenergy related exports made up just 6% of the country's output. Into this mix, throw in declining oil prices and the approximate 1.7 million students within the country's higher education system and some form of confrontation begins to look almost inevitable.

However, what few likely expected is that Algeria’s popular protests would achieve so much and do so so peacefully.

Dismissed as relatively apolitical in the past, Algeria's youth have instead positioned themselves at the forefront of popular protests. "We were politically aware and we followed what was happening," protester Faycel Fay, 29, told Al-Monitor from Algiers. "Like all young Algerians there was this feeling of dissatisfaction with the country's political and economic situation. However, we didn't participate in any vote, nor did we adhere to any political party."

One of the defining characteristics of Algeria's demonstrations has been the plethora of media savvy slogans, as well as the deluge of satirical, and occasionally hilarious, memes that have flooded social media. "Algerians have a lot of humor and creativity and they are showing it," Fay continued. "Everyone expresses themselves in their own way and that is the strength of the peaceful demonstrations in Algeria."

Since the initial protests broke out in the wake of 82-year-old ailing Abdelaziz Bouteflika's announcement that he would seek a fifth term of office, the success of Algeria's demonstrations has confounded expectations. After promising a limited term should his bid be successful, Bouteflika amended his offer in the wake of continued unrest, seeking instead to eke out his fourth term while the country's constitution underwent root and branch reform. Ultimately, conciliatory noises from the president's immediate circle counted for little and, after the loss of much of his power base among the army, business leaders and much of the National Liberation Front (FLN), Bouteflika resigned April 2. However, the exit of the man many had come to regard as occupying the presidency in name only did little to stem the tide of popular protest.

As the demonstrators push on, calling for the ousting of interim President Abdelkader Bensalah, their demands have begun to cut to the very heart of the ruling elite — known locally as the pouvoir. Moreover, as time marches on, there are growing signs that the power is beginning to push back. In addition to the increased use of tear gas and water cannons, arrest numbers are mounting. While still maintaining his ostensibly benign stance toward the country's protesters, Chief of Staff Gen. Ahmed Gaid Salah warned on Tuesday that "time is running out" to find a solution to the country's continued upheaval.

Tin Hinane El Kadi, a member of the protest group Les Jeunes Engages (Activist Youth), told Al-Monitor, "There has been increased repression recently, but there has also been this wave of hope. We're talking about millions of people all mobilizing. It's huge. What we're seeing is truly historic. We just hope that it will keep being peaceful."

El Kadi, a researcher at the London School of Economics, continued, explaining that the reasons behind the massive numbers of young activists and students among the protesters were essentially twofold, generational and socioeconomic. "Most of those studying now will end up unemployed," she said. "Since 2014, there has been a gradual falling in living standards as oil prices have shrunk and, with that, mounting frustration. The state no longer has the capacity to employ its young people. This is exacerbated by corruption and nepotism, with many of the children of government ministers all gaining scholarships to study abroad that most students don't."

In addition to the economic drivers of protests were the generational ones, with a new cohort of students emerging, unscarred by the memory of the black decade of civil war that ripped Algeria apart in the 1990s. "Today, we have the whole youth bulge that has taken place across MENA. Obviously, they're all very aware of the black decade, but none of them has any living memory of it. So, when the government tries to scare them with threatening a return to that time if the protests continue, it doesn't really carry the same weight as they want it to. It's a major generational shift."

For Fay, determined to maintain the pressure for change that first brought him to the streets in February, the situation remains uncertain. “I think it's still unclear. We're still in crisis, but there's a lot of hope,” he told Al-Monitor. “And as long as there is hope, there is life.”