Algeria’s interim government claims to be undertaking economic reforms of the energy sector, but protesters see the effort as an attempt to shore up economic and diplomatic support heading into December presidential elections. 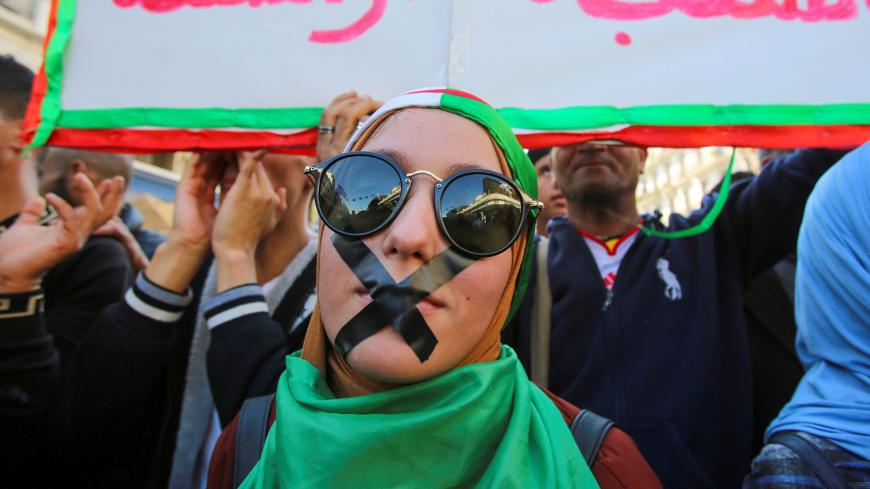 A demonstrator takes part in a protest demanding an end to corruption and the army's withdrawal from politics, Algiers, Oct. 29, 2019. - REUTERS/Ramzi Boudina

Thousands of demonstrators returned to the streets of Algeria on Oct. 30 to protest the system of entrenched power that they feel still has a stranglehold on the country despite a series of high-profile arrests and official resignations. “We’re continuing to protest because we don’t trust the system,” Riad Mostefai, a young apprentice hairdresser, told Reuters from central Algiers. “It might regenerate.”

In mid-October, the “pouvoir,” the commonly used term for the unofficial networks of power seen as controlling the country, added to protesters' list of concerns when the Council of Ministers approved government proposals intended to overhaul Sonatrach, the leaden state-run oil and gas company. Now the controversial measures must pass in a yet-to-be-scheduled vote in parliament, and in addition, it has to pass the test of Hirak, the popular protest movement channeling Algerians' discontent, which sees the move as an attempt by the caretaker government to entrench itself.

Hirak has morphed and grown through months of rigorous protest. Exploding in February in a gut reaction against then-President Abdelaziz Bouteflika’s plan to run for a fifth term, the movement has spread through large segments of Algerian society. For many of the overwhelmingly young protesters, it has come to encapsulate the widespread rejection of what they perceive to be a closed and corrupt nexus of industry, the military and government that has lorded over the people for generations.

While the corruption that has flourished has taken many forms, the administration of the country’s hydrocarbon deposits has cut particularly deeply. Algeria ranks 10th among countries with proven reserves of natural gas. Moreover, it stands sixth in global gas exports and possesses the third largest proven reserves of shale gas.

The revenues resulting from these natural resources have been staggering. Overseen by state-owned Sonatrach, Algeria’s gas exports have propped up an economy that has underperformed in all other areas. Oil and gas have formed the backbone of Algeria’s economy or decades, accounting for around 20% of gross domestic product and 85% of its exports.

With those revenues came corruption. In April, the government of interim President Abdelkader Bensalah sacked Sonatrach CEO Abdelmoumene Ould Kaddour, who had been appointed in 2017 by Bouteflika to reverse the impact of years of erosion in the company’s reputation and economic viability through graft and mismanagement, exacerbating the effects of the global slump in oil prices that began in 2014.

Regardless of the price of oil, Sonatrach remains vital to Algeria's future. The company, one of the largest in the world, directly employs around 120,000 people and provides livelihoods for many others in supply and ancillary services. Yet, youth unemployment stood at 29.10% in the third quarter of 2018, with opportunities outside of government and energy scarce.

Now, Bensalah's government, operating months beyond the constitutional limit to his interim mandate, which expired in July, has revived long-term plans to introduce laws to reform Algeria’s hydrocarbon industry in a bid to shoehorn legislation through before the presidential elections scheduled for Dec. 12. Under the resulting new system, Algeria will open its doors to joint enterprises with international conglomerates, such as ExxonMobil and Chevron, who are understood to have already entered talks with Sonatrach.

Few on the street question the need for urgent reform of the hydrocarbon sector, but they oppose the timing of the legislation of a caretaker government operating long beyond its mandate and apparently desperate to fast track it toward a fait accomplis.

“This isn’t really about the details of the law,” Raouf Farrah, a member of the collective Les Jeunes Engagés (Activist Youth), which has featured prominently throughout Hirak, told Al-Monitor. “This isn’t the subject of debate. This is about an illegitimate government undertaking a strategic decision that is going to affect the future of all Algeria.

“If the government succeeds in this, they’re going to bring in investment from the US, from France, from all around the world, and by doing so, give them a stake in ensuring this government’s survival and that of the pouvoir,” Farrah asserted.

For Farrah, like many involved in Hirak, years of opposition to the government, as well as having watched the rise and fall of the revolutionary movements that swept the region after 2011, have created a cynicism toward the motives of power and a wariness and awareness of the tricks governments can use in preserving it.

“People are angry,” Farrah said. “The people in the street are angry. They know the government is trying to force this through by Dec. 12, and they’re ready to resist them at every step.”

Despite an Oct. 30 announcement by Energy Minister Mohamed Arkab confirming that almost 60% of Algeria’s hydrocarbon deposits have been exhausted, the infusion of cash that might stem from new international partnerships would provide a much-needed victory for Algeria’s creaking body politic ahead of the December vote. With existing reserves dwindling, however, any victory might prove short-lived.

“Further exploration is certainly possible,” Jonathan Hill, director of the Institute of Middle Eastern Studies at King’s College London, told Al-Monitor. “However, investors are also likely concerned about Algeria’s growing internal consumption. As Algeria is trying to wean itself away from its reliance on gas exports, it is expanding its industrial base, and that creates a further drain on hydrocarbons.”

Though the ultimate value of Algeria’s hydrocarbon reserves may be uncertain, their role remains critical. Just how critical a role they will play in the build-up to Dec. 12 also remains an unknown.