Although weekslong protests in Algeria managed to dislodge the president and regime-linked figures, many challenges lie ahead still. 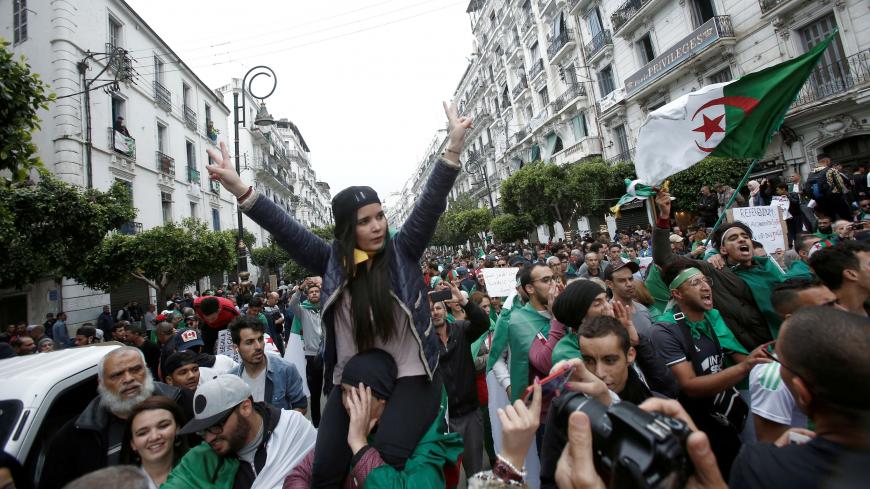 TUNIS, Tunisia — Over the past 11 weeks, little has slowed the pace of protests across Algeria, as hundreds of thousands of citizens from all walks of life have taken to the street to voice their rejection of the entrenched cliques and clans that have come to define the Algerian political and business elite for decades.

Events took a dramatic turn on May 4 with the arrest of Said Bouteflika, the brother of ousted President Abdelaziz Bouteflika, long considered to be the de facto ruler of the country, along with former Intelligence Chief Gens. Bachir Athmane Tartag and Mohamed Mediene (better known as Toufik). All three stand accused of “harming the army’s authority and plotting against state authority.”

These latest arrests follow those of five of the country’s leading oligarchs, including Algeria’s richest man, Issad Rebrab, last week, and the dismissal of the CEO of the state energy company, Abdelmoumen Ould Kaddour, as the relentless pressure for change from the streets chips away at the traditional power structures, the “pouvoir,” which have overseen the economy as it has mired and stagnated.

For decades, Algeria has relied upon its massive hydrocarbon reserves to power its economy, using its exports to underpin a subsidy program unrivalled within the region. However, with that has come large-scale corruption that has dogged economic growth and restricted access into the workplace for many.

Currently, around 30% of Algeria’s population are ages 15 to 29, with 70% of the population under the age of 30. Within that first bracket, employment runs to around one in four. Despite calls for change from international bodies such as the World Bank and the International Monetary Fund, little has been done to diversify Algeria’s monolithic and state dependent industries, essentially bequeathing a poisoned chalice to whatever government might inherit the present administration’s legacy.

Growth is as slow as corruption is rife. According to Transparency International, Algeria achieved just 35 points out of a potential 100 in the 2018 Corruption Perceptions Index, significantly below the global average of 43 and notably below the regional average of 39.

Few of Algeria’s protesters have any illusions about the virtue of the infrastructure they are fighting for. “Corruption has been literally infecting this country for decades. It's the basis of the system,” Algerian author Anys Mezzaour told Al-Monitor. “It's everywhere. You can see that properties are crumbling while billions are disappearing through money funneling networks.”

The tendrils of Algeria’s corruption extend to every aspect of modern life, Mezzaour said, adding, “Entire parts of people's lives are limited by corruption: security, health, education, property access, job access, and so on.”

Despite numerous and highly vocal commitments to wean the country off its reliance on hydrocarbons and the subsidies they underpin, successive budget deficits have seen Algeria’s foreign reserves shrink from $178 billion in 2014 to $62 billion today, as the government borrows from its future to subsidize its present.

“The government's strategy for 20 years was to buy ‘social peace,’” Mezzaour noted. “They made an implicit deal with society: You don't demand your rights and liberties and in exchange we promise to offer you a better life through subsidies.”

However, the fall in oil prices since 2014 has given the lie to government assurances, according to Mezzaour. “This policy was to shut down any political opposition and to divide and conquer [with corruption the only winner]," Mezzaour added.

Few of the protest leaders Al-Monitor spoke to believed that the regime’s ousting would immediately lead to any cleansing of the administration, or surge in the jobs and future that got the country’s young to protest in the streets. “Young people aren’t demanding jobs, so much as they are demanding dignity. They want a better life,” said Raouf Farrah, coordinator for Appel des jeunes engages pour l'Algerie, a youth collective calling for radical change before the beginning of the Hirak popular protests.

“People know the economic situation is difficult,” Farrah told Al-Monitor, outlining some of the social pressures the next few years would undoubtedly bring. “Above all else, we need a legitimate government that can make legitimate and strategic choices. People are pragmatic. Ultimately, they are calling for a government that respects them and their willingness to concretize democracy and rule of law.”

Farrah added, “People are aware that it is going to be a long, long journey to achieve democracy. We probably have enough foreign currency to support us for about four years, but a lot can be achieved in four years. Algeria has wasted decades. This is why it’s so important to act now.”

However, standing in their way are the remaining strands of the regime, not least the army’s Chief of Staff Lt. Gen. Ahmed Gaid Salah, and the long month of Ramadan when the protest movement that has relied on its scale will essentially be hampered by the religious rituals of the holy month.

“The next few weeks will be critical,” Farrah noted. “Over the last few weeks we have seen two distinct sides emerge: the popular movement and the army. The population is expecting that the army will support its demands. Otherwise the positions will polarize.”

He added, “Right now the army needs guarantees, just as the popular movement needs the army’s support, even if that’s just them standing aside.” To this end, Farrah said, mediation would be vital, with the momentum that has carried Algeria’s popular movement thus far paramount.

However, that momentum now looks imperiled by Ramadan, with many Algerians restructuring their days to reflect the holy month’s daylight fast. That the nature of the demonstrations would change was almost certain, the spokesperson for one of the country’s protest groups, Farkata, said on condition of anonymity, adding, “This Ramadan will push Algerians to find new solutions to maintain the pressure on the system.”

Eleven weeks of protest have seen the Algerian demonstrators dislodge a president and much of the country’s political and business establishment. However, despite the achievements of the last few months, many still expect the greater challenges to lie ahead.