The Algerian government recently approved a law to regularize the energy sector, which was rejected by protesters. 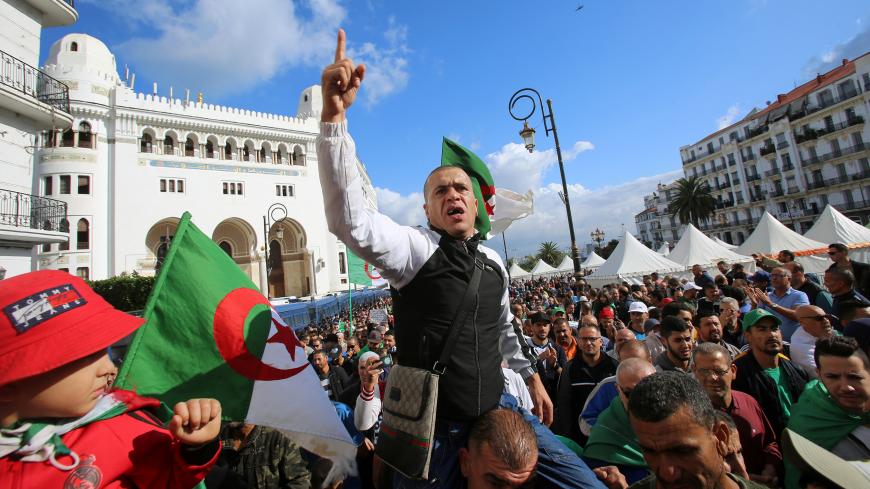 A demonstrator gestures as he shouts slogans during a protest against the country's ruling elite, rejecting the December presidential elections, Algiers, Algeria, Oct. 25, 2019. - REUTERS/Ramzi Boudina

The Algerian Council of Ministers approved Oct. 13, during a meeting chaired by interim President Abdelkader Bensalah, a controversial bill that revises the regulations and the role of the state in the country’s strategic hydrocarbons sector. As the session was taking place, hundreds of Algerians gathered in front of parliament to protest against the proposed changes, marking one of the latest disputes between the ruling authorities and Algeria’s popular protest movement.

The importance of the energy sector in Algeria — a key sector of its economy and a source of national pride — makes its regulation a delicate move, especially given that the current president, government and parliament, all involved in drafting the law, are seen as illegitimate by many Algerians, who have been asking for their departure for months.

The Algerian authorities have justified the urgency of the bill, arguing that the country is running out of time. National gas consumption had almost doubled from 2002 to 2017, and a deficit in the local market is expected by 2030. Therefore, immediate action would be a must given that about a decade is needed to discover, develop and exploit a field, Toufik Hakkar, vice president of the national state-owned oil company Sonatrach, said in an interview with Le Soir d’Algerie on Oct. 20.

The adoption of the bill, however, has been heavily criticized owing to Algeria’s political stalemate. “The government under [former] President [Abdelaziz] Boutefika was already working on this law … which was supposed to be approved during the first half of 2019. But the political situation temporarily put it on hold before being suddenly recovered by the [Noureddine] Bedoui government,” Said Beghoul, an independent consultant on oil and gas projects, told Al-Monitor.

“The timing is inappropriate,” Tewfik Hasni, former vice president of Sonatrach, said. He told Al-Monitor, “The proposed reforms are not adequate given the [current] oil and gas juncture. What is necessary is not a law but an energy strategy leading to a model of energy consumption and energy mix that integrates all [kinds of] energies.”

The bill pushed by the Cabinet has the declared goal of restoring the attractiveness of an industry in crisis in order to expand exploration activity in partnership and increase production. According to the Ministry of Energy and Mining, the current hydrocarbons law, adopted in 2005, has failed to deliver its hoped-for results, notably the improvement of the sector’s investment conditions and financing. They assume that the little interest shown by foreign companies in the sector is a direct consequence of complex taxation, few incentives, lack of contractual flexibility, unreliable regulation and complex administration.

These conditions, they argue, are the main reasons behind the limited number of contracts signed in recent years, the downward trend in reserves, the drop in exploration activity and the reduction in the contribution of foreign partners. Since 2005, only 19 tenders and 13 contracts have been signed out of a total of 67 exploration sites; 60% of Algeria’s initial hydrocarbon reserves are now exhausted. And for the last 10 years, there have been on average less than two discoveries in partnership annually.

On Oct. 28, Minister of Energy Mohamed Arkab noted that hydrocarbon revenues had experienced a sharp decline only in the last year. At the end of September, these reached $24.6 billion, compared to $29 billion in the same period in 2018.

To reverse this trend, the draft law introduces a new tax system and contracts, redefines the role of the different public entities involved in the sector and simplifies the administrative framework. Of these, the most controversial parts are the ones that curtail the competences of a public agency, especially its prerogative to control the operating costs of research and exploitation contracts, as well as the tax concessions and the green light given to the controversial shale gas. Experts have also challenged the assumption that the problems facing the energy sector are the result of the country’s legal framework.

“The legal framework is not at all [the reason of] the crisis in the sector,” said Beghoul, who is also the former director of Sonatrach’s exploration division and former CEO of one of its numerous subsidiaries. “First of all, there is a natural depletion of [Algeria’s] main fields, and then there is the mismanagement of these fields.”

“The main challenge of the system is to deal with an economy dependent on oil revenues,” Hasni noted. “The mistake is to believe that the oil rent still exists.”

Experts Al-Monitor spoke with also pointed out that the current political uncertainty in Algeria and the crisis of legitimacy of its ruling elite will reduce the law’s chances to bear significant fruit.

“Foreign investors are aware that the current [political] context is very volatile and there is little certainty on the country’s future, and investments [in this sector] are capital intensive and benefits are long term,” Raouf Farrah, the lead Africa analyst at the risk consultancy SecDev Group, told Al-Monitor.

Ignoring the outright rejection of the draft law by the Hirak, and closing ranks once again with the current government, the army, the country’s main political player, showed its support for the bill in a public speech of its chief of staff, Ahmed Gaid Salah, on Oct. 15

“This is perhaps a sign of a regime running out of ideas,” Jonathan Hill, director of the Institute of Middle Eastern Studies at King’s College London, told Al-Monitor.

Besides the lack of legitimacy of the current authorities, many Algerians consider that the changes envisaged by the bill undermine the national sovereignty on hydrocarbons for the benefit of foreign multinationals. In this regard, Arkab admitted Oct. 8 that the bill was prepared in consultation with the world’s top oil companies. This license has been interpreted by many as a move by the regime to ensure international support at crucial times in exchange for the country’s energy resources.

Slogans against the draft law on hydrocarbons have been common during the weekly protests held in the country since Oct. 11.

“Algerians take sovereignty very seriously, [and this] is about controlling the narrative around the protests,” Hill noted. “If you can claim that you are defending or seeking to defend national sovereignty, you can accuse your adversary of undermining it, and then gain the moral and the narrative high ground among the wider population and use that strength to support your position.”

Aware of the sensitivity of the allegations of undermining national sovereignty, Algerian authorities have tried to build a discourse of its own. On Oct. 14, Arkab amended his own declarations and stated that the bill was a 100% the result of national expertise. The authorities have emphasized as well that the bill will keep the limit on foreign ownership at 49% (the remaining 51% being state-owned), the sector will be under their control and it will tighten the role of Sonatrach as an economic actor in the service of Algeria’s development.

None of this was enough to secure the immediate support for the bill of the General Union of Algerian Workers and political leaders and parties close to the regime, which have also rejected the bill and claimed that the current institutions are illegitimate and the timing inappropriate, echoing the position of the Hirak.

On Oct. 20, parliament proceeded to submit the bill to the Committee on Economic Affairs, Development, Industry and Trade. The draft law must be ultimately approved by both parliamentary chambers, a process that some doubt will be completed by Dec. 12, when presidential elections have been convened despite the hirak’s opposition.

“With the presidential elections on the horizon, [the chambers] will delay its adoption to allow further consultation,” Sen. Benzaim Abdelouaheb of the National Liberation Front told Al-Monitor. He added, “Several parliamentarians and senators prefer to wait until after the elections, and study the bill calmly with a new president and a new government.” 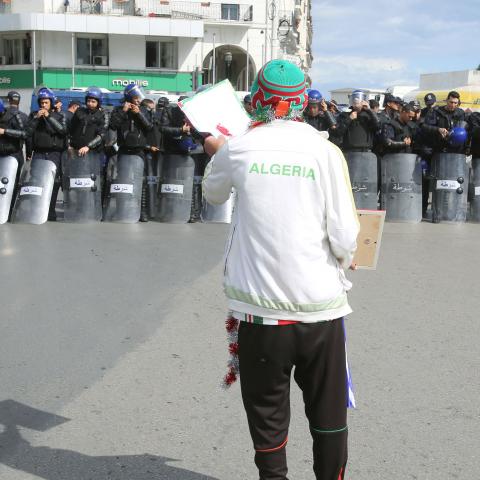