Over the past week, many within the Algerian government have switched over to the side the protesters, but it's unclear how welcome they will be this late in the game. 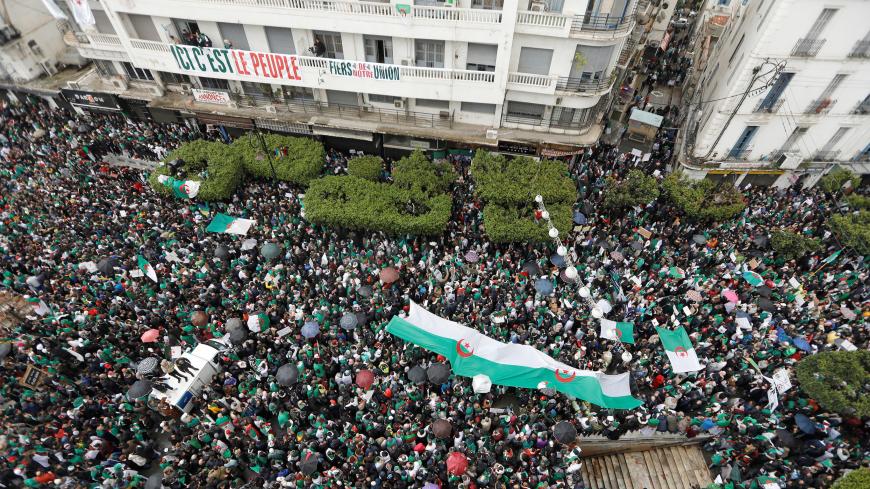 Protesters throughout Algeria again took to the country’s rain-soaked streets for the fifth weekend running to voice their unequivocal rejection of the latest bid by the country’s 82-year-old president, Abdelaziz Bouteflika, to retain his faltering grip upon the reins of office.

In the face of relentless demonstrations, fueled by the weakness of the regime and its succession of qualified compromises and superficial reversals, protests have grown to the point where they are effectively paralyzing the country. On March 18, Bouteflika reiterated his position, issuing a letter underscoring his determination to remain within the presidential palace until the process of constitutional reform was complete.

However, after nearly three decades in office, the offer of reform has convinced few. Instead, demonstrators have dismissed the de facto extension of his fourth term as a ploy to buy time for the enfeebled president’s shadowy coterie of advisers — known as the pouvoir — to conceal decades of corruption gained from their position at the heart of the presidency.

“The people no longer want to be represented by a president who is seriously ill and can no longer assume his duties, and who is surrounded by clans working in [the shadows], which has given birth to a corrupt system,” a spokesperson for the group I Am Algerian told Al-Monitor.

It was a message that echoed throughout the country’s streets, as Algerians from all walks of life braved the rain to peacefully voice their rejection of the pouvoir and all it entailed. "We stay here until the whole system goes," Mahmoud Timar, a 37-year old teacher, told Reuters. Another teacher, Rachid Zemmir, 55, told the agency, "We are close to victory. The system is divided."

From the initial small-scale protest that began 200 kilometers from the capital in Bordj Bou Arreridj on Feb. 13, to the movement that now dominates Algeria’s entire political conversation, the protests have grown beyond anything its originators could have imagined. “The demonstrations are nationwide,” Algerian freelance journalist Massinissa Benlakehal told Al-Monitor, adding, “The country has never seen such a demonstration of popular force in its post-independence history, that is a fact."

“Demonstrators are taking it to the streets in various cities of the country, northern coastal side, inside the country as well as in the Sahara cities. Demonstrations are filled by young people, children of both gender, elders, women, men,” he said, noting, however, that it is Algeria’s youths that drive the movement.

Over the past week, many within Algeria’s ruling cabal have seemingly switched their loyalties from the government they supported to the thousands of Algerians protesting their role within its rule. On March 20, the country’s ruling National Liberation Front (FLN) appeared to side with the protesters, before qualifying its position a day later, stressing the party’s moral and political commitment to Bouteflika's decisions. The same day, the influential Democratic National Rally (RND), itself part of the ruling coalition, broke ranks to side with the swelling numbers of protesters. Elsewhere, while on a tour of army bases, the country’s army chief Lt. Gen. Ahmed Gaed Salah also praised the demonstrators’ “noble aims and pure intentions.”

However, what reception such latecomers may receive within the popular movement is unclear. “For these groups, they had no choice,” Benlakehal said. “If their opposition and desertion [from the government] was true, they would have done it at the very beginning of the popular protest movement against the fifth mandate of Bouteflika.” Instead, Benlakehal speculated, the ruling elite’s newfound loyalties sprang more from political opportunism than any underlying sense of principle. “They’ve waited almost three weeks after the movement kicked off to show their support, because they don’t want to find themselves on the losing side when this movement reaches its goal: to get rid of the entire system,” he said.

As the demonstrations gathered momentum, a tentative leadership was reported as emerging from the crowds in the shape of the Coordination Nationale pour le Changement, an organization allegedly made up of jurists, civil society activists and members of the country’s opposition. In its opening statement, titled "Platform of Change," the group called upon the president to step down after his mandated term ended in April and for the army to limit themselves to their "constitutional role."

However, even here, ambiguity exists. “Nobody knows where it came from," reporter Mahrez Rabia told Al-Monitor. “The main names that appear in the document deny having signed it, or claim not to have even been aware of this platform.”

Nevertheless, deserted by allies within government and unsure of the support of the security services, Bouteflika and his inner circle obstinately hold on to power. “It’s basically inertia that’s keeping him there,” James McDougall, a professor at Trinity College Oxford, told Al-Monitor. “They’ve had weeks, decades even, to choose a successor, but they haven’t really decided one way or another.”

One of the key challenges facing the pouvoir, McDougall explained, was the traditional way that power within the Algerian elite was distributed across various centers, from business to the security services, making the challenges of granting the presidency to any single individual fraught with risk.

Similarly, finding any individual able to broker with the protesters on an equal footing after the widely derided appointment of octogenarian diplomat Lakhdar Brahimi has also proven beyond the government’s traditionalist mindset. “In the past, they could call upon these old figures from the war of independence to mediate, but they’re all dead now," McDougall said. Moreover, with the Coordination Nationale pour le Changement potentially amounting to little more than a chimera, “it’s not really obvious who they could negotiate with.”

However, in the face of the protesters who have flooded city centers across Algeria in the hundreds of thousands to voice their rejection of the president and his regime, how long Bouteflika can continue to dominate the political process is far from certain.

As one Harry Potter-inspired placard would have it, “Algeria has no master. Algeria is a free country.”