Protests continue in Algeria, where the regime hopes its selective culling of the political elite will appease the demonstrators. 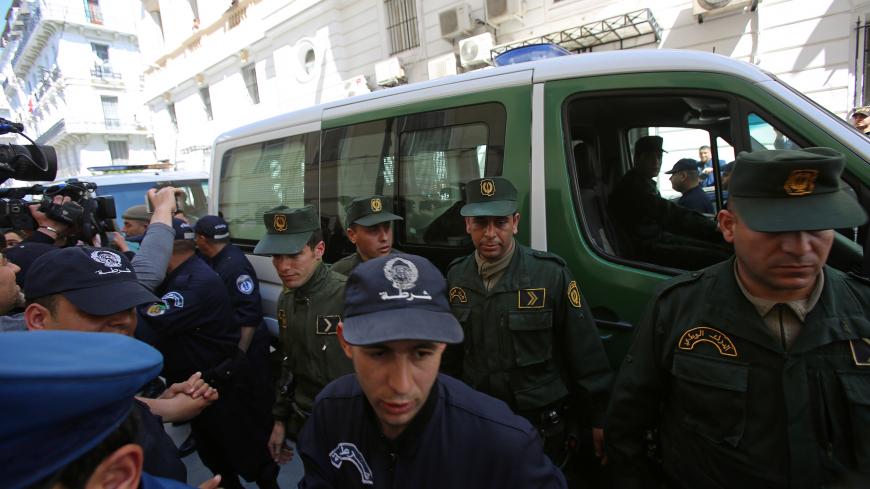 Media and police surround a convoy of police vehicles as businessmen suspected of corruption are driven to court in Algiers, Algeria, April 23, 2019. - REUTERS/Ramzi Boudina

TUNIS, Tunisia — The momentum of the popular demonstrations that have seized Algeria shows no sign of weakening. Faced with a groundswell of public outrage over years of stagnation and the machinations of a self-serving political elite, Algeria’s government and security services have thus far proven themselves unable to placate the tide of protest against them.

As the protests push on — the students packing the streets on Tuesdays, before the full extent of public anger is given voice on Fridays — the government’s reactions have rudely exposed an elite with no answers. However, as the protesters draw closer to the center of the ingrained power structures — known locally as the pouvoir — that have ruled the country for decades, growing signs of desperation and frustration are coming to characterize the official response.

Within the top tiers of Algeria’s state and state-dependent business sectors, there has been a dramatic purge, overseen — at least tacitly — by the army Chief of Staff Gen. Gaid Salah, himself the target of the protesters’ ire.

On April 24, Abdelmoumen Ould Kaddour, the chief of Algeria’s sprawling state-owned energy company Sonatrach, was dismissed from his position, with analysts attributing his departure primarily to his proximity to ousted President Abdelaziz Bouteflika rather than any particular failing in his role. Over the weekend, five of the country’s leading tycoons, including Algeria’s richest man, Issad Rebrab — all said to enjoy extensive links to the ousted president — were arrested. Beyond the business sector, both former Prime Minister Ahmed Ouyahia and current Finance Minister Mohamed Loukal have been summoned for questioning regarding the suspected misuse of public money.

Touring a military site in the country’s southwest on Tuesday, Gen. Salah, a powerful figure within Algerian politics and a key figure within the pouvoir, underscored his sympathies for the demonstrators’ aims, while repeating his dread-tinged warnings of foreign plots to subvert their aims and lead the masses toward violence.

Irrespective of the general’s warnings, indications of rising police violence have largely been confined to Algiers. Though protests passed relatively peacefully last weekend, 108 demonstrators were seized the weekend prior.

“Security forces are no longer peaceful, demonstrators are facing tear gas, water cannons and annoying sound guns to disperse them,” Amine Hocine, a freelance Algerian journalist, told Al-Monitor. The only thing holding the security forces back, Hocine added, was the public spectacle of hundreds of thousands of demonstrators cramming the capital’s streets. “In addition to the media presence, most protesters raise their phones during demonstrations and can document any abuses by the security forces,” Hocine said.

Focusing international attention on the passive nature of the protests, Hocine said, were the repeated chants by demonstrators calling for peace, effectively placing any aggressive action by the police beyond the realm of public sympathy and fueling even greater demands on the part of protesters. For this reason, and for this alone, Hocine said, “I expect that security intervention will remain limited.”

Elsewhere, in cities such as Oran, the protests have remained calm, with demonstrators reporting that police officers have kept watch from their parked vans. “Not one of them seems to have a grudge or any bad intentions whatsoever toward the people,” Nora Benseghir Achour, a teacher from Oran, told Al-Monitor. “The police were doing their job, fair and square, and the people gave them no excuse to be aggressive.” Achour continued, “At a certain stage, one could feel that they are also afraid of us. The people are united, and that was made really clear.”

However, Achour remained suspicious of the underlying motives behind the purge of the former president’s inner circle, suggesting it may be little but a further ploy for the powerful to retain power. "[T]o be honest, we’re crossing our fingers, [and hoping] that it won’t be just a huge fat lie, or just one of their plays,” she said.

Such maneuvering is not new to Algeria. James McDougall, a professor at Trinity College Oxford, told Al-Monitor, “They did this before in the 1990s," adding, “and even in the 1980s, when Bouteflika found himself accused and cast out into the political wilderness. What we’re looking at is a selective culling of the old clan rather than any indication of real change.”

McDougall continued, referring to the judicial questioning of Ouyahia and Loukal. “But they’re being questioned. That's a very big move, though it's unclear what it really means.” he said. “Said Bouteflika [the former president’s brother and long considered the power behind the throne] has essentially disappeared. They’re moving the deckchairs and throwing some people overboard. But they're still trying to save the regime's ship.”

Moreover, for the man held by demonstrators to be the architect of the recent crackdown, Gen. Salah, things are far from straightforward. “Much of the violence we’ve seen so far has been the regular police clashing with mainly students. But it’s not really clear how directly Salah controls the police," McDougall said. “Right now, he’s able to stare down the protests, but to what degree his control and influence extends to the police themselves is unclear. However, the real question is to what degree he can rely on the support of the rest of the army when he’s the one in the crosshairs.”