There is a growing likelihood that elections in Algeria will be postponed until later this year, which could give the popular movement more time to craft an agenda, but also allow the interim power structure to remain in place. 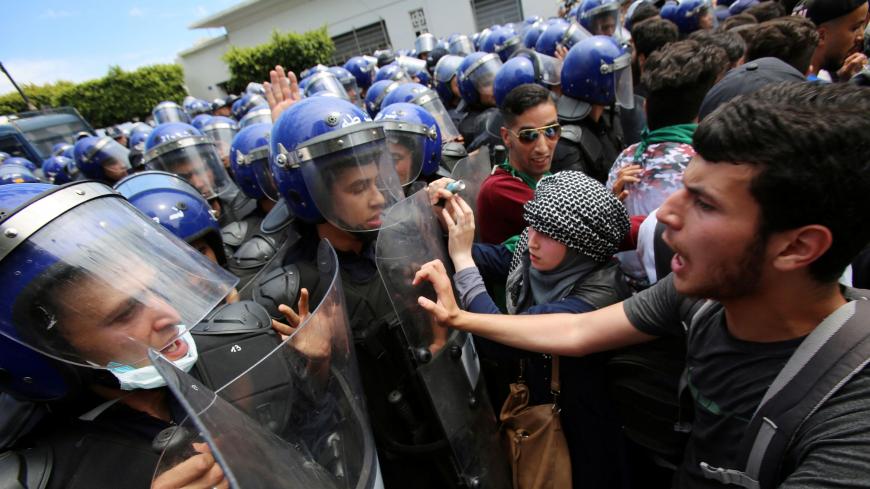 Students and police confront each other during an anti-government protest in Algiers, May 21, 2019. - REUTERS/Ramzi Boudina

TUNIS — As protests in Algeria inch toward their 14th Friday, paralyzing city centers and all but engulfing the country’s political agenda, the presidential elections scheduled for July 4 have begun to grow increasingly unlikely. Quoting an anonymous source said to be familiar with the matter, Reuters has reported that logistical difficulties as well as the scale of the popular movement could push balloting to the end of 2019.

The prospect of deferring the election until later in the year presents Algeria’s popular movement with a crucial test. On the one hand, it provides the country’s entrenched power networks, the “pouvoir,” a temporary stay from the execution the protests are threatening. On the other, it would give protesters time to possibly agree on an agenda and candidates, but while risking schisms inherent in such a move. A delay would also prolong the economic stagnation that has denied many among the predominantly youth-led movement the futures for which their state-funded university educations equipped them.

Itsall Boutmee and Nora Benseghir Achour, both teachers from Oran, would welcome a possible deferment. Achour told Al-Monitor, “Time is crucial to decide who will be the right person for the right place at the right time and under the right circumstances.” Boutmee seconded Achour's position, adding, “As long as there is no violence, [people] will accept the idea of a postponement.”

Hamdi Baala, an Algerian journalist covering the protests, agreed with the two teachers. “I think postponing the election would be perceived in a positive light by the popular movement,” Baala told Al-Monitor. “The main demand since the resignation of [President] Abdelaziz Boutelfika has been a transition led by the people, not the regime.”

Baala emphasized that if an election is held in July, it would be overseen by authorities with allegiances primarily to the regime. “Postponing the election would also open the way for a political solution and negotiations outside the ‘constitutional’ pretext offered up to now by the regime in order to reproduce itself,” Baala added.

Waiting until later in the year, however, would prolong the economic paralysis gripping the country and extend the influence of Gen. Gaid Salah, the army chief of staff, whose prominence appears to have usurped that of caretaker President Abdelkader Bensalah and Prime Minister Noureddine Bedoui. Salah uses regular public briefings to disavow harboring political ambitions and to underscore the army’s determination to maintain its “constitutional” role vis-a-vis the state.

That constitution has been a central issue in official debates about the future of Algeria and how the regime should react to the popular movement. Originally drafted in 1963 following the country’s bruising war of independence against the French, the document has undergone numerous revisions, including some intended to provide a legal pretext for the extension of Bouteflika’s tenure, positioning the document closer to the interests of the regime than those of the country’s protesters.

“I imagine there’ll probably be some frustration among the protesters over any delay in the elections,” Jonathan Hill, director of the Institute of Middle Eastern Studies at King's College London, told Al-Monitor. “So far, they’ve been pushing forward as the government has retreated, peeling back the networks like the layers of an onion.”

The achievements of the popular movement thus far are hard to dismiss. In addition to toppling Bouteflika, relentless pressure from the street has resulted in a tranche of dismissals and arrests of people once close to the former president, including several wealthy businessmen, Said Bouteflika, the president’s brother and popularly perceived power behind the throne, spy chiefs and Gens. Athmane Tartag and Mohamed Mediene.

“Deferring the election isn’t a sign of weakness, so much as it is a calculation,” Hill remarked. “They’ve [the regime] been learning from the Arab Spring states. If you leave the protesters to determine a single agenda, the likelihood is that they’ll fracture, leaving parts of the movement that the pouvoir can co-opt. This also gives the regime time to prepare the mechanisms they’ve been using for years to, at best, influence elections, and at worst, manage them.”

Though the success of the popular movement is likely to produce some kind of economic reckoning for Algeria, which is heavily oil and gas dependent, it may not be what the protesters are actually hoping to achieve.

“Any economic reform — at least any reform likely to secure international backing — is likely to be neoliberal in nature,” Hill said. “This will hit the subsidy system and make life hard for ordinary people. It is a double-edged sword. In the short term, the government may be able to survive off the revenues from oil and gas exports, but beyond that, who knows.”

For now, the momentum lies firmly with the protesters, who have forced unprecedented change upon a country that since a savage civil war in the 1990s has grown more accustomed to stagnation than profound political and societal shifts. Thus far, the protesters have made unimaginable progress and have done so largely peacefully. Any delay in the election, however, risks testing Algeria’s protest movement in a way that it has hitherto not experienced.

by Murielle KASPRZAK and Joseph SCHMID | AFP | May 26, 2022
END_OF_DOCUMENT_TOKEN_TO_BE_REPLACED