Protests in Algeria continue even with an interim president in place and fresh elections set for July, and the country’s economy may soon suffer. 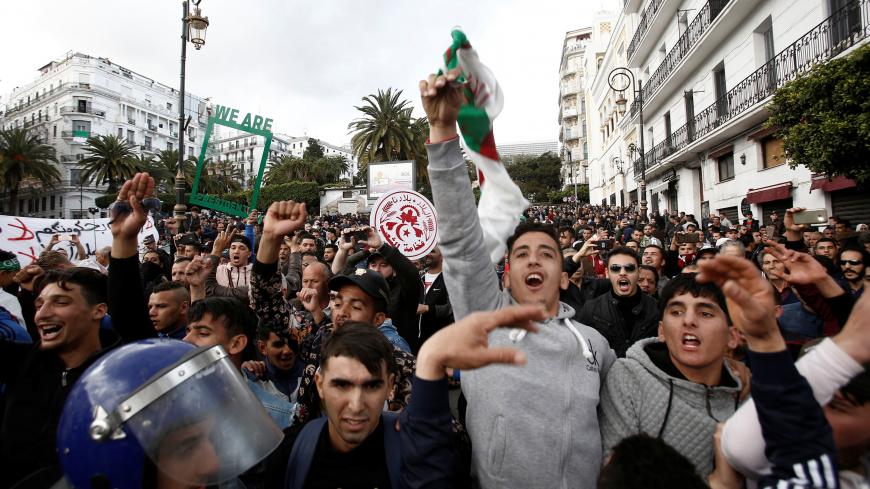 After weeks of protests, Algeria remains in a state of flux. Hopes among the country’s ingrained political elite that the resignation of ailing former President Abdelaziz Bouteflika would return the country to its former state of managed calm were dashed on April 9, as protesters numbering in the thousands flooded the country’s streets to oppose the appointment of his constitutionally mandated successor, Abdelkader Bensalah.

Promising fresh elections for July 4, Bensalah remains hamstrung both by a constitution limiting his ability to introduce the change the streets are demanding as well as his status as what France24 termed a “seasoned regime insider.”

Facing a tidal wave of peaceful opposition unleashed by the 82-year-old former president's fifth run for office, many see Bensalah’s appointment as a stalling tactic intended to buy time for the entrenched circle, the “pouvoir,” of military, industrial and powerful trade union figures that have coalesced around the presidency. However, with every backtrack and concession the government has made to date only fueling further protest, it is unclear if fresh elections will stem the tide of popular unrest.

On the streets, the verdict on Bensalah’s appointment was clear. In Algiers, sporadic clashes between police and protesters broke out against a background of tear gas, water cannon and demonstrators’ collective choruses of “peaceful, peaceful.” Elsewhere, in cities across Algeria, demonstrations went on without incident, with the country’s protesters still clinging to the filial bonds many told Al-Monitor still held them and the ranks of the security services together.

For those on the streets of Oran in northwest Algeria, Bensalah represents not so much a break with the past as an extension of the status quo. “We have nothing against Bensaleh,” Kamel of the group The Smile Revolution told Al-Monitor.

For Kamel, Bensalah's appointment represents nothing. “It is the default, to give a semblance of constitutionality to the continuance of power. We are against the sclerotic system that has been in business for 57 years,” he said.

Irrespective of the protesters' aims, they are inevitably being drawn into a confrontation with the beleaguered pouvoir and the power structures that have held sway over Algeria since it first gained independence in 1962. Moreover, with each day of protest ratcheting up both the material and future cost of unrest, there are early indications that the regime is beginning to push back.

Freelance journalist Hamdi Baala was covering the protests in Algiers on April 9 when he found himself among those being targeted by the security service's water cannon. “Yesterday's police violence marked a return to the attitude of the first week of protests,” he told Al-Monitor. “Police then were trying to maintain the protest ban in Algiers [effective since 2001] but were overrun by the sheer amount of protests.”

As for the reasons behind the initial crackdown, “Most commentators here tend to believe the authorities are forcefully trying to impose the regime-led transition,” he said. “Most Algerians are rejecting this scenario and want a real transition with no regime figures” involved, Baala concluded.

“I think we're definitely beginning to see the regime digging in,” Jessica Northey, an Algerian specialist from Coventry University, told Al-Monitor. “Bensalah's appointment as head of state isn't what people want. They're going to keep going, and they're going to keep pushing until they see real change.”

With protesters calling for the dismissal of the “three Bs” — which, in addition to Bensalah, include Prime Minister Noureddine Bedoui and the interim president's potential replacement, chief of the Constitutional Council Tayeb Belaiz — it is clear the bedrock of Algeria's power structure is under assault. In its place is an emerging confederation of increasingly confident civil society groups potentially able to contribute to the process that will see the reins of power change hands. “There's definitely cohesion there,” Northey remarked, adding, ”The networks have developed and many of the groups have grown even closer over recent weeks.”

Pointing to the quartet of civil society groups that steered neighboring Tunisia through its post-revolutionary crisis in 2013, Northey said, “Circumstances in Algeria are a lot freer than they were in [pre-revolutionary] Tunisia. Algeria has some very intelligent individuals in some well-developed organizations that are already contributing to clear and concrete ideas as to how the transition could be managed. With that said, they'll need to wait until the regime backs off before any specific individuals can really come forward at a higher political level.”

“I think what happens in the next few days will prove critical,” Northey added.

With an economy heavily reliant upon the exportation of hydrocarbons to Europe, the longer the unrest continues, the investor confidence in the country will be affected. It's an increasingly critical factor in the face of high public expenditure, subsidies and high unemployment.

Though Algeria's hydrocarbon exports have shown themselves able to weather the storms of protest so far, they won't do so for long. “There's no way we can really quantify the financial cost of the demonstrations so far,” Adel Hamaizia, a research fellow at Chatham House, told Al-Monitor. Hamaizia added, “However, the opportunity cost is already showing itself, with some energy projects and ventures involving foreign investors and partners now stalling. The introduction of a new hydrocarbons law, which was expected to increase productivity and attract investment to the sector, will also be delayed.”

With much vaunted legislation intended to streamline the country's lumbering energy sector also on hold, the protests risk eating away at the networks underpinning the state actors at play within the presidential palace of Algiers.

“Also, despite Algeria’s fiscal breakeven price in the $90 per barrel, with this current political situation, fiscal adjustments including planned increases in domestic energy prices that would also help reduce the growth in domestic energy consumption, will likely be postponed. [The government] will continue to tap dwindling foreign exchange reserves in order to plug fiscal deficits,” Hamaizia concluded.