Algeria's Hirak marches on in the face of official warnings

Algeria’s predominantly young protesters have proven resistant to any attempt to hijack their cause and bend it to any end but their own. 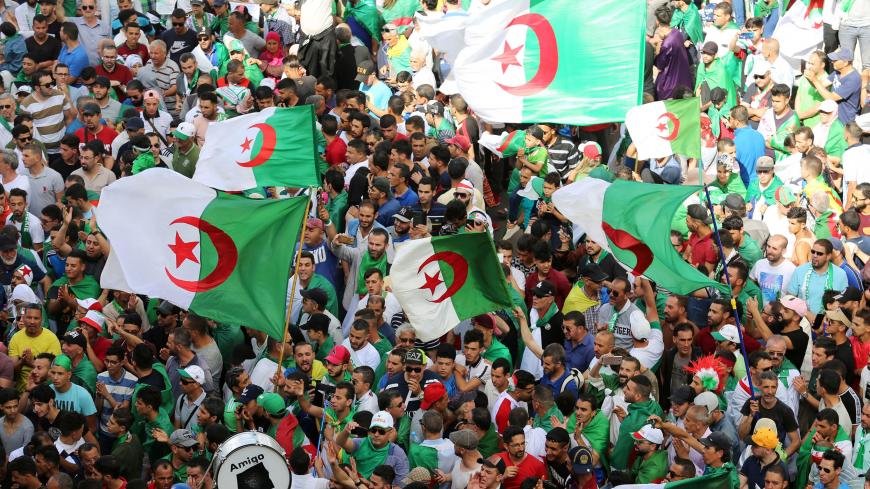 Demonstrators gesture and carry flags during a protest demanding the removal of the ruling elite and prosecution of former officials linked to former President Abdelaziz Bouteflika, in Algiers, Algeria, June 14, 2019. - REUTERS/Ramzi Boudina

For the 18th consecutive Friday, Algeria’s protesters gathered in the thousands, calling for the exit of the regime they see as having enriched itself at the country’s expense.

In a potential indication of the hardening mood of the regime toward protesters, Army chief Gen. Ahmed Gaid Salah, who has emerged as the country’s de facto leader ahead of interim President Abdelkader Bensalah, termed anyone opposing the army “enemies of Algeria.”

In the same speech June 18, Gaid Salah asked, “Those who are knowingly trying to circumvent … terms of the constitution … do they realize what it means to suppress all state institutions?”

Irrespective of the regime’s apparently diminishing patience, demonstrators again took to the streets across Algeria, shrugging off the recent tranche of anti-corruption investigations opened into individuals close to former President Abdelaziz Bouteflika, as they repeated their demands for the complete transition to a new regime untouched by the corruption of the old.

“Gaid Salah is scared of the [proposed] transition because he would not be able to control everything,” protester Salim Hassani in Algiers told AFP.

Another demonstrator, Ahmed Meshdall, told the agency, “It is not in the interests of Algerians to destroy the institutions.”

“A transition provides a path to elections without the mafia” currently in power, he added.

The emergence of the Amazigh flag among protesters has proven a lightning rod through which to channel official ire. Algeria’s Amazigh, or Berbers, are indigenous to North Africa and in recent years have been gaining ground in their campaign to secure official recognition for their culture and language among the country’s Arab majority.

During previous protests in Berber-dominated areas, demonstrators have underscored their unity with the indigenous minority through chants and banners. However, clashes occurred between demonstrators and security forces June 21, leading to the arrest of 18 people for carrying the Amazigh flag — banned by Gaid Salah earlier in the week.

However, despite official warnings of infiltration and entryism, chances of minority groups pushing the Hirak toward the kind of conflict that ripped Algeria apart through the 1990s seem far distant. It is estimated that around 200,000 were killed during the conflict that began in 1991 when the army canceled an election Algeria’s Islamists appeared set to win. The bitter conflict that followed tore much of Algeria’s social fabric apart, with massacres of civilian populations across the country coming to define the brutal conflict.

However, fears that the current protests might be co-opted by the Islamist cause have thus far proven unfounded, with the generous terms of the amnesties offered in 1999 — which provided many with a comfortable living beyond the conflict — still holding 20 years after their granting. While sporadic jihadist violence remains a reality within Algeria, the protesters of the predominantly secular Hirak have so far proven resilient to co-option by any cause other than their own.

“The popular movement transcends the classic secular versus religious communities for many reasons. It is a truly national movement in which people have the same goal: the end of the system [the regime),” Raouf Farrah, coordinator for Appel des jeunes engages pour l'Algerie, a youth collective calling for radical change, told Al-Monitor.

Moreover, though the decision taken after the cessation of fighting to allow moderate Islamists to participate in the government may have proven critical in defusing the threat of renewed violence, the decision by groups such as the Muslim Brotherhood-aligned Movement for Society and Peace (MSP) to engage with the government has ultimately served to tarnish their brand.

“Islamists such as the MSP are seen as political opportunists, being tempted to stay close to the regime and the so-called 'political opposition class.’ Political Islamist parties are discredited in major urban areas. They take part in the protests without crying out loud their political identity,” Farrah said.

“But Islamists are not a monolithic community,” Farrah added, pointing to the time a few weeks ago when Salafists (adherents of a highly conservative form of Islam) carrying jihadist flags attempted to enter a protest before being dismissed by protesters calling for “a democratic and free Algeria.”

Though Algerian society remains relatively conservative, any appetite for political Islam — at least in the form offered by the country’s Islamist parties — appears to be waning. “Islamist parties did really badly in the last elections,” Jessica Northey, a specialist in Algerian civil society from Coventry University, told Al-Monitor, referring to the scant 6% of votes gained by the MSP during the 2017 legislative elections. Northey added, “But then, people are largely frustrated by all political parties. They’re generally seen as being part of the regime.”

Moreover, though encompassing large swathes of Algerian society, the Hirak itself remains largely secular. “You need to remember that much of the current wave of protests began in the football stadiums,” Northey said, adding, “These were the messages that were being carried in their chants; the demands for change, the humor and the calls for patience. These run through all aspects of the current protests, and they don’t really chime with any Islamist agenda."

For 18 weeks, Algeria’s predominantly young protesters have proven resistant to any attempt to hijack their cause and bend it to any end but their own. Despite official utterances to the contrary, there is little to suggest that may change any time soon.