Algeria’s army chief Lt. Gen. Ahmed Gaid Salah rejected conditions put forth by protesters for talks to end the political crisis; the conditions include the release of people arrested during the demonstrations and the removal of checkpoints erected around the capital, Algiers. 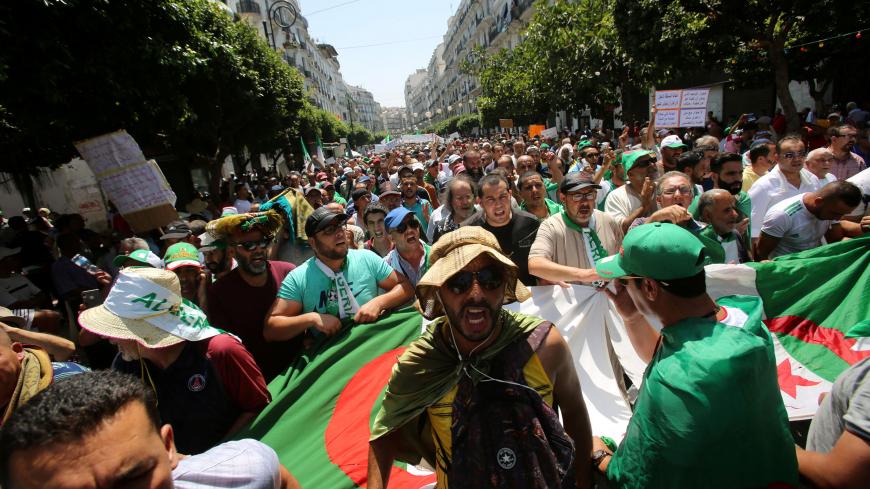 As the Algerian protests entered a further week of unrest, the latest attempt to bring together the demonstrators and government — the Independent Panel for National Dialogue and Mediation — looks to have emerged stillborn, with threats of resignation and criticism from both sides already eroding the body’s standing, just days into its mandate. One member, Smail Lalmas, has already left the body.

The panel, with members pulled from Algeria’s civil society groups, was established by interim President Abdelkadir Bensalah on July 25. It was charged with finding a common course between the apparently irreconcilable agendas of the Algerian state and the mass protests movement, or hirak, calling for its ejection. However, just five days after its formation, a spokesperson for the new body was already threatening its dissolution should the state refuse to respond to its preconditions for dialogue.

In addition to calls for the resignation of the current government and its replacement with a further interim body, the six members of the Independent Panel for National Dialogue and Mediation called for “the release of people arrested during the marches in recent months, and lifting the security checkpoints set in the entrances of the capital Algiers in a bid to prevent Algerian citizens from taking part in the weekly marches staged every Friday,” its head, Karim Younes, told the country’s state-run Channel 1 radio July 30.

Even before the current deadlock, problems were apparent. On Aug. 2, protesters across the country appeared to reject both the aims of the National Dialogue Panel, as well as the continued influence of army chief Lt. Gen. Ahmed Gaid Salah, who many see as the de facto ruler of the country. Throughout the country, protesters again took to the streets, chanting “Makach hiwar maa l'isaabat” ("There is no dialogue with the gangs") as well as voicing their rejection of rule by the army.

Salah appeared hostile to the National Dialogue Panel, rejecting its preconditions for talks and imposing his own vision on the panel’s agenda, saying, “We should not lose more time, as the elections must be the main focus of the dialogue, a dialogue we welcome and wish to be successful, without imposing the preconditions that lead to diktats,” he told an army assembly July 30.

For many, the haste with which the panel was assembled appeared emblematic of a state rapidly running out of solutions to the challenges posed by the wave of peaceful protests that have engulfed the country. “The government’s actions are always confusing, always opaque,” Raouf Farrah, an activist with the collective, Les Jeunes Engagés (Activist Youth), told Al-Monitor, going on to explain that around half of the six-person team was unknown to protesters, while other, more worthy, candidates for inclusion appeared to have been overlooked entirely.

“Essentially, it arrived dead,” Farrah said, adding, “Now with Salah’s comments, it’s finished. We always knew that power really resided with the army, now Salah’s confirmed it. Nothing can happen without the involvement of the high command.”

Nevertheless, while the military might be unwilling to consider any preconditions for talks, it is the country’s civil society groups that are positioned to give voice to the anger of the hirak. Since protests began in February, the hirak has achieved phenomenal progress.

"You need to bear in mind the extent of Algeria’s civil society associations and their hard work over the last three decades,” Jessica Northey, a specialist in Algerian civil society from Coventry University in the UK, told Al-Monitor. “Although often small, they’re everywhere. The hirak may be about individuals against the state, but Algerian civil society organizations really have laid the foundations for different expectations about governance and democracy. These groups are attached to very solid principles. They’re about honesty, accountability and transparency.”

Northey said, “Against them is this small elite, who are completely unrepresentative of the people.”

However, unable to reconcile an intransigent regime and a protest movement unwilling to engage with a state it regards as inherently corrupt, the National Dialogue Panel risks going the way of the political parties that might normally have brought the sides together. “Obviously, the political class and their parties existed long before the popular movement,” Farrah said. “Normally they’d be undertaking this kind of dialogue, but they can’t. They’ve been dealing with the state so long they’re seen as corrupt. I understand it. The popular movement totally rejects the idea of elections until there can be an alternative mechanism for overseeing them. However, the parties want them [elections]. They want them quickly.”

Should the National Dialogue Panel prove incapable of engaging with the Algerian regime, it is not clear what would happen next.