Islamists gained some influence in Algeria’s recent parliamentary elections, but the ruling party retained its position. 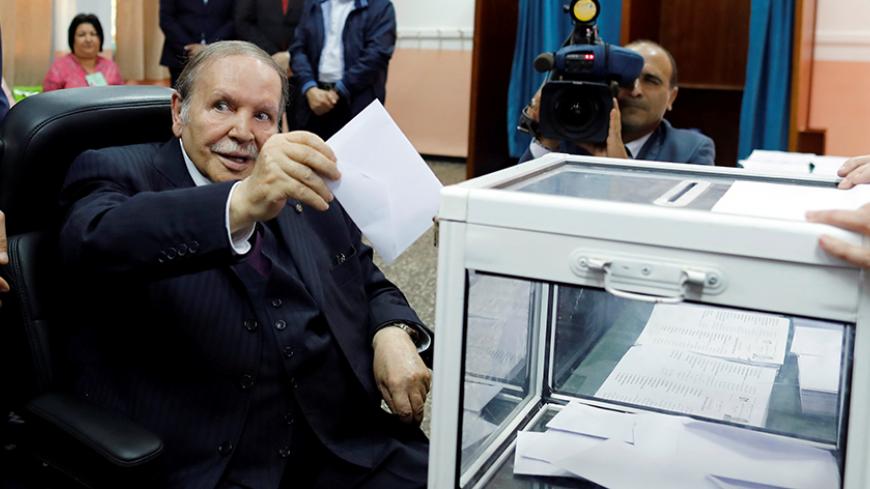 Algeria’s governing coalition won the majority of parliament seats in the recent election and, amid the country’s economic crisis, the Islamist Movement for the Society of Peace (MSP) earned enough seats to return to the political scene.

The ruling National Liberation Front (FLN) retained power in the oil-rich country in the May 4 legislative elections. Despite the sensitive timing of the vote, which coincided with tough economic cutbacks aimed at making up for decreasing oil prices, the FLN and its ally, the National Rally for Democracy (RND), secured 261 votes out of 462.

The RND obtained 97 seats, which helped save the FLN from losing the majority after winning only 164 seats — about one-quarter less than it won in 2012. The RND and FLN had formed a coalition to fend off rising challengers such as the MSP.

Voter turnout was low. During Friday prayers the week before, the Algerian minister of justice called for eligible citizens to participate in elections, yet only 37% voted, compared with 43% in 2012. The minister’s lack of impact merely reaffirmed the people’s lack of interest in the elections.

Journalist Jalal Boutti lives in Algiers and covered the election for Chaab newspaper. Voter apathy and 2.7 million invalid or canceled ballots contributed to the low turnout percentage, but Jalal told Al-Monitor he also believes it was due in part to a boycott by voters to express their discontent.

According to Boutti, many parliament members are only concerned with the perks, money and legal immunity they receive. The poor turnout, he said, shows people have lost confidence in parliament.

“The people felt they were let down by their representatives, who approved increasing [domestic] oil and food prices for the 2017 budget, which was the drop that made the cup overflow,” Boutti said.

After the domestic oil price increases, Algeria also announced tax hikes to compensate for falling revenues. Those controversial moves seemed to open the door for the Islamist coalition MSP to re-enter Algeria’s political arena, where it came in third, winning 33 seats to become the strongest opposition party in parliament. (There are about three dozen parties.)

This gives the Algerian Muslim Brotherhood branch, which is affiliated with the MSP, some influence over the other dominant parties, such as the FLN.

Perhaps this explains the decision by President Abdelaziz Bouteflika and Prime Minister Abdelmalek Sellal to invite MSP leader Abderrazak Makri to participate in the choosing of Cabinet members.

“I think the [MSP] could make a comeback thanks to the strength of its candidates. … The party is considered among the most powerful in the country,” Boutti told Al-Monitor.

However, Makri said no decision has been made to accept the invitation. He noted the election results are being appealed.

“I assured the prime minister that our participation in the government is up to our National Advisory Council, after the Constitutional Council’s decision on the presented appeals,” Makri wrote in a Facebook post.

Boutti sees several reasons why the Islamists have gained strength. “The Islamists’ strength lies in the weakness of leftist and secular parties, which suffered major defections. Some of them even boycotted the elections. Therefore, the Islamist parties thrived because they also presented well-experienced candidates.”

The Islamists could field a candidate in the next presidential elections. “If Bouteflika runs for president again, the Islamists might not present a candidate. But if he does not, they will surely seek the presidency,” Boutti told Al-Monitor. Bouteflika, 80, suffered a stroke in 2013.

Bouteflika has been president since 1999 and helped bring an end to 10 years of civil war. The former foreign minister is known for the Charter for Peace and National Reconciliation. The country’s economy enjoyed massive growth during his term before the oil market crash in 2014, which still overshadows people’s lives. Algeria depends on oil to keep its economic wheels turning.

Unlike its neighbors, Algeria hasn’t yet taken advantage of its tourism industry. While the country has beautiful coastal resorts in Oran and the charming desert of Adrar, this sector has not attracted enough investors or tourists to boost Algeria’s economy. Morocco and Tunisia, on the other hand, have focused on tourism for decades.

One out of three young Algerians is unemployed. This bitter fact could eventually help the Islamists in parliament continue their bid to take power. But this effort is likely to be blocked by the governing coalition, and the MSP could even find itself isolated in a direct confrontation with the FLN and RND in the 2019 presidential elections.