Egypt's railroad authority said the collision occurred after the emergency brakes were activated on one of the trains. 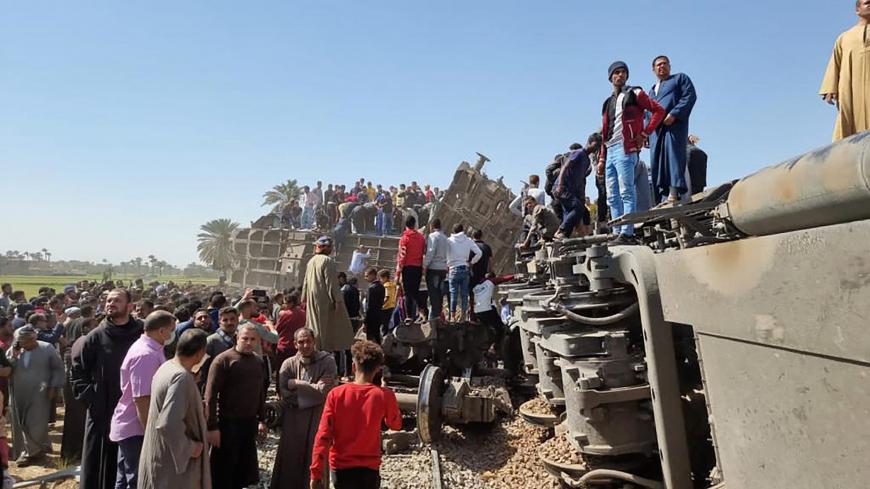 People gather around the wreckage of two trains that collided in the Tahta district of Sohag province, some 460 kilometers (285 miles) south of Cairo, reportedly killing at least 32 people and injuring scores of others, Egypt, March 26, 2021. - AFP via Getty Images

At least 32 people are dead and more than 90 others injured after a passenger train collided with another train in southern Egypt, the country’s Ministry of Health said on Friday.

Dozens of ambulances were dispatched to transfer the scores of injured to four area hospitals, the ministry said in a statement. Videos posted to social media showed rescue teams and bystanders digging through the wreckage of the flipped rail cars, looking for trapped passengers.

According to the Egyptian National Railways Authority, the train collision in Sohag, a city about about 260 miles south of Cairo on the Nile, was caused by “unknown individuals” using the emergency brakes. The statement continued that a second train traveling in the same direction crashed into the first train after it suddenly stopped.

A security source told Reuters that “the trains collided while going at not very high speeds, which led to the destruction of two carriages and a third to overturn.”

The public prosecutor's office says it has launched an investigation. Egyptian President Abdel Fattah al-Sisi wrote on Facebook that he was closely monitoring the situation and would “penalize whoever was responsible.”

He wrote, "The pain that tears our hearts today cannot but make us more determined to end this type of disaster."

Locomotive accidents are a common occurrence in Egypt, where the aging state-owned railway system has weak safety standards and trains are poorly maintained. A 2019 crash sparked a fuel tank explosion and fire on a platform in the capital’s main train station, killing 25 people.

A crash near the southern Egyptian city of Aswan in 2018 left six people with minor injuries and led to the firing of Egypt's railway authority chief. The year before, 37 people were killed when two trains collided near the port city of Alexandria.

In what marked the country’s deadliest train episode, a fire erupted on an overcrowded third-class train that was bringing Egyptians home to Aswan for the Muslim holiday of Eid al-Adha in 2002. At least 360 people were killed in the accident, with many having jumped out of the moving train to escape the fire.

The Sohag accident on Friday comes as Egypt works to free a skyscraper-sized container ship that’s currently stuck sideways in the Suez Canal, creating a buildup of vessels waiting to pass the world’s busiest waterway.