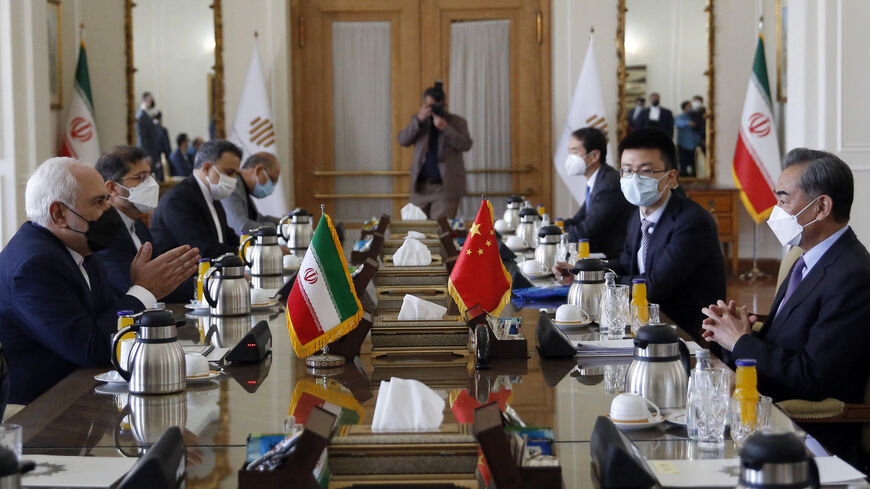 Hot take: China’s reach in the region still has limits

China has long had a two-track approach to the Middle East and North Africa: racking up public-relations points with "Belt and Road" business and infrastructure deals, but staying out of security and political issues.

Not so fast. China may sense an opening in the Middle East, given the priority the Biden administration has placed on human rights — which could complicate already scratchy ties with Egypt, Saudi Arabia and Turkey — and the perpetually thorny talks to restart the Iran nuclear deal.

But there are limits to China’s reach.

Too much, too soon? Despite a more assertive Middle East posture, China is neither ready nor experienced enough in the region to take a mediating role on regional security. As we noted in our review of the October 2020 Arab Youth Survey, China is perceived as more of an "ally" than the United States. But the United States is still considered the most influential outside power in the Arab region (China barely registers, trailing Turkey, Russia and Iran). While Iran and the Palestinians may want to see another big player step up, Israel and the GCC would prefer the conversation with China remain on the highly pragmatic topics of Belt and Road and vaccine diplomacy.

Follow the money. Molavi’s guidance is on point about following the money. Despite the continued acrimony in US-China ties, the US market still matters. But there is a long game on the money. Russian Foreign Minister Sergey Lavrov, at a press conference with Wang on March 23, said that the "imperative of our time" is for Russia and China to set up an alternative financing system to allow trade with "major trading partners" to occur in the "national currency" [of China and Russia]. This seems more aspirational than ominous, at least for now, but it merits watching. Follow the money.

1. Biden tunes out Bibi on Iran

There’s a reason we’ve barely heard a peep out of Israeli Prime Minister Benjamin Netanyahu on Iran in recent days. The longtime Israeli leader is busy fighting for his political survival, and as Ben Caspit writes, is “preferring to focus on his personal existential struggle rather than on Israel’s, at least for now.”

But in a last-ditch effort to influence the Joe Biden administration's position on reviving the Iranian nuclear deal, Bibi plans to soon send Mossad chief Yossi Cohen to Washington, Al-Monitor has learned.

Can Emirati mediation be what finally resolves the Nile Dam dispute? The United Arab Emirates certainly has leverage in East Africa, including its major investments in Ethiopia, Egypt and Sudan, as Khalid Hassan writes. But so far, only Sudan has greenlit the UAE’s proposal to play referee.

Meanwhile, the European Union has also expressed interest in resolving the deadlock over the Grand Ethiopian Renaissance Dam. One possible EU pressure tactic: stopping its donors from investing in Ethiopia until an agreement on the mega dam is reached. Hagar Hosny has the report here.

Speaking of the UAE, keep an eye on the wealthy Gulf country’s growing interest in Somaliland. The UAE just appointed a career diplomat to serve as trade envoy to the self-declared African nation. Samuel Ramani explains how Abdullah Muhammad al-Naqbi’s appointment “could reflect a sea change in the UAE’s power projection tactics on the Red Sea and the Horn of Africa.”

Amid chilled ties between the United States and Saudi Arabia, Russia sees an opening, including the possibility of weapons contracts with the kingdom. Kirill Semenov explains that Moscow “is already demonstrating its readiness to meet Saudi Arabia halfway,” having dispatched its foreign minister, Sergey Lavrov, to Riyadh last month to meet with Crown Prince Mohammed bin Salman.

Turkish President Recep Tayyip Erdogan is bent on bolstering relations with China, especially as foreign investors flee Turkey (as Mustafa Sonmez reports), and even as Beijing’s repression of its mostly Muslim Uyghur population draws outrage in Turkey. Police in Ankara tried to tamp down pro-Uyghur protests as Erdogan met with China’s top diplomat last week for talks focused on economic cooperation and the coronavirus. As Metin Gurcan writes, “managing the rapprochement is likely to grow more difficult for Ankara as China’s rivalry with the West intensifies.”

One cool thing: Riyadh lights up the Saudi sky

Saudi Arabia’s capital city is hosting its first annual light festival this month, showcasing 60 artists from around the world whose outdoor light installations and public artworks are designed to illuminate Riyadh’s urban landscape. Rebecca Anne Proctor explains how the innovative exhibition, which runs until April 3, fits into the kingdom’s Vision 2030 reform plan.

In unveiling the 2020 report Tuesday, Secretary of State Antony Blinken said the global “trend lines on human rights continue to move in the wrong direction.” His department documented a long list of violations in Turkey, Saudi Arabia and Egypt, all of which the Biden administration has pressed publicly on human rights. The report, which you can read in full here, also raised eyebrows for its language on Israel.

ICYMI: “The most significant political moment in Iraq’s history since 2003.”

That’s what Chatham House’s Renad Mansour calls the massive youth-led anti-government protests that erupted in Iraq back in 2019. Listen to Andrew’s podcast for more on what Mansour describes as a societal backlash by young people who have experienced “traumatic misgovernance.” Plus, they discuss the challenges to incremental reform in Iraq.