Some 60% of Syrians are at risk of hunger this year, UN Secretary-General Antonio Guterres said. 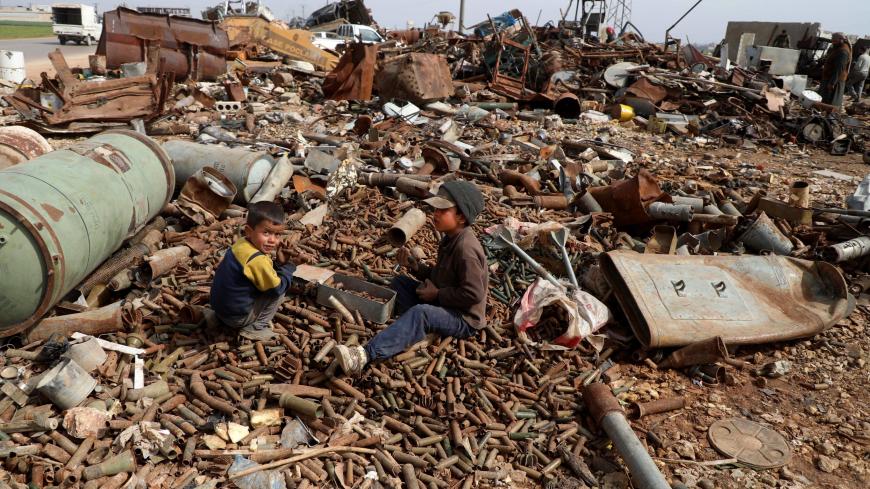 Syrian children sit amid spent bullet casings at a metal scrapyard on the outskirts of Maaret Misrin town in Idlib province, on March 10, 2021. A Syrian family that was displaced from the village of Latamneh in Hama's northern countryside 4 years ago has found a source of income in collecting and selling metal scrap, including unexploded ordnance shells and spent ammunition casings, a business all the family participates in. - AAREF WATAD/AFP via Getty Images

Syria may no longer grab front-page headlines but “the situation remains a living nightmare,” warned UN Secretary-General Antonio Guterres ahead of the 10-year anniversary of the country’s vicious civil war.

“It is impossible to fully fathom the extent of the devastation in Syria, but its people have endured some of the greatest crimes the world has witnessed this century. The scale of the atrocities shocks the conscience,” Guterres told reporters Wednesday.

On Monday, Syria will mark 10 years since peaceful protests against the government of Bashar al-Assad turned deadly, spawning a war that has killed more than 400,000 people and forced more than 5 million to flee the country.

Roughly 60% of Syrians are at risk of hunger this year, Guterres said, blaming the country’s economic collapse on a combination of "conflict, corruption, sanctions and the COVID-19 pandemic."

Faced with a veto threat from Russia and China, the 15-member body last year shut one of two remaining access points used to bring aid into the war-torn country. In July, the Security Council will vote on whether to reauthorize the cross-border aid operation.

A fragile cease-fire reached in March 2020 by Russia and Turkey, which back opposing sides of the war, has largely held, pausing the fighting between the rebels and government forces in northwestern Syria. The UN has called for a permanent, nationwide cease-fire.

After a decade of fighting, Assad is now in control of much of the country, with the exception of a pocket in northwestern Syria run by opposition groups and a swath of northeastern Syria managed by US-backed Kurdish forces.

Activists are meanwhile pursuing justice outside of Syria. Last month, a court in Germany convicted a former Syrian regime officer of crimes against humanity in a landmark trial seen as the first step in holding Assad’s government accountable.