Blinken called on the UN Security Council to reauthorize a cross-border aid operation into Syria despite Russian and Chinese opposition. 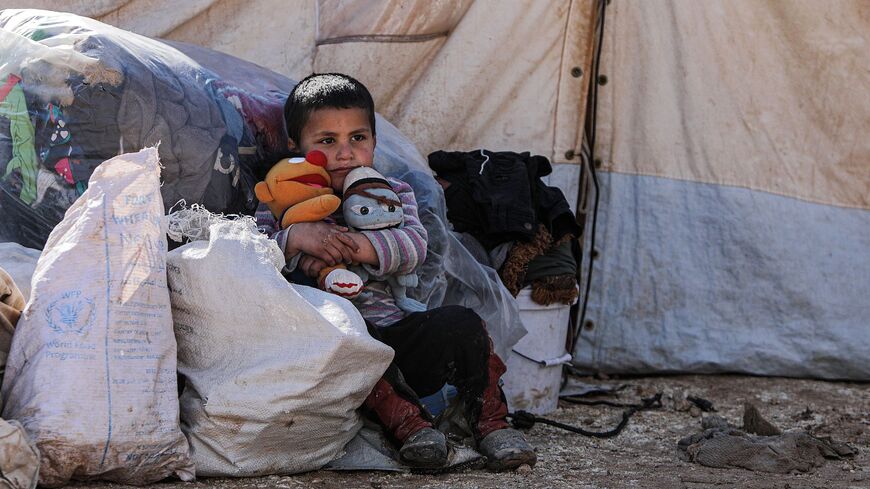 A child sits holding toys and leaning on a sack of clothes at a camp sheltering Syrians displaced by conflict in the village of Niyarah in the rebel-controlled northern countryside of Syria's Aleppo province near the Turkish border, on Feb. 1, 2021. - BAKR ALKASEM/AFP via Getty Images

US Secretary of State Antony Blinken on Monday demanded aid workers be granted unhindered access to war-torn Syria, calling on the UN Security Council to scale up humanitarian assistance provided to a population whose lives depend on it.

“Stop making humanitarian assistance on which millions of Syrians’ lives depend a political issue,” Blinken said, pressing the 15-member council to “stop enabling the obstruction of aid.”

Blinken’s comments, which he delivered while chairing a virtual meeting of the Security Council, came ahead of a looming vote that could see the Syrian regime’s patrons, Russia and China, further deprive the country of outside aid at a time when the United Nations says an estimated 13.4 million people — two in every three Syrians — are in need.

Because of President Bashar al-Assad's well documented history of weaponizing food aid, the Security Council adopted a resolution in 2014 that allowed UN agencies and their partners to bypass the government and deliver aid through four border crossings — two in Turkey, one in Jordan and one in Iraq.

But after Moscow and Beijing threatened to shut down the entire operation when it came up for renewal in January 2020, the council’s other members reluctantly weakened the cross-border resolution to get the support of the two veto-wielding countries. The number of delivery routes was halved from four to two and the yearlong aid mandate was slashed to six months.

Humanitarian access was further reduced six months later when Assad’s allies on the council forced another compromise resolution that eliminated one of the two remaining aid routes from Turkey, leaving only the Bab al-Hawa crossing on the northwestern border.

Blinken called on the council to reauthorize Bab al-Hawa when it expires in July and to renew the shuttered access points at Bab al-Salam on the Turkish border and the Al Yarubiyah crossing on the Iraqi border, which had supplied the Kurdish-held northeast before it was closed last year.

Moscow has signaled it wants to do away with the aid mechanism altogether. The Russian government, which has used its veto to block more than a dozen Syria resolutions since 2011, has argued the cross-border operation violates Syria’s sovereignty — a claim its UN ambassador repeated on Monday.

"Sovereignty was never intended to ensure the right of any government to starve people, deprive them of life-saving medicine, bomb hospitals or commit any other human rights abuse against citizens,” said Blinken.

The Russian government is seeking to cut assistance to an area of Syria that its forces bombed just over a week ago. Russian airstrikes targeted the Bab al-Hawa border crossing on March 21 and in what UN aid chief Mark Lowcock called “obviously a deliberate attack,” government artillery struck a hospital in rural western Aleppo the same day. The casualties included two cousins just 10 and 12 years old.

The wave of recent attacks threaten the relative calm that has prevailed in Idlib and the surrounding areas since a Russian-Turkish cease-fire took effect in March 2020. But even with hostilities on hold for much of the past year, the humanitarian situation has remained dire in Idlib.

A majority of the population is displaced and hunger has reached record levels. The cost of basic food items like bread and sugar now exceeds average monthly salaries.

“This aid is the only lifeline that they have,” UNICEF chief Henrietta Fore said of cross-border assistance for the 1.7 million children living in the impoverished northwest.

When the Syrian regime, backed by Russian forces, renewed its offensive on Idlib in late 2019, thousands of desperate families fled the heavy bombardment and found refuge in overcrowded camps along the sealed Turkish border. Others pitched makeshift tents or slept in the open air.

Cutting what little humanitarian aid is received by these civilians would be catastrophic, the United States warns, and could drive a new wave of displaced people to Turkey’s doorstep.

"Look, we all sit in these chairs, we speak these words, we represent our countries,” Blinken said. “How is it possible that we can't find in our hearts the common humanity to actually take meaningful action to do something?”

“Despite our differences, we have to find a way to do something, to take action to help people. That is our responsibility, and shame on us if we don’t meet it,” he said.

Despite the stirring plea from Blinken, it remains to be seen how much of a priority Syria will be for the new Biden administration. The White House has said little publicly about how it plans to address the decade-old conflict and has not appointed a special envoy to spearhead diplomatic efforts.