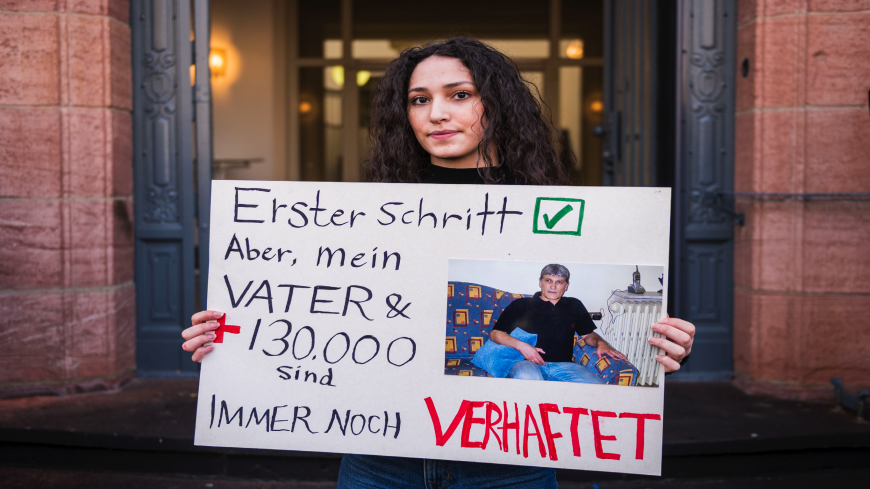 Sedra Alshehabi stands with a placard with the picture of her father Ali and a text reading 'First step, but my father and 130,000 are still in jail' after the verdict in the trial of Syrian defendant Eyad al-Gharib, accused of crimes against humanity in the first trial of its kind to emerge from the Syrian conflict on Feb. 24, 2021, in Koblenz, Germany. Eyad al-Gharib, 44, former Syrian intelligence service agent was sentenced to four and a half years in jail for complicity in crimes against humanity in the first court case over state-sponsored torture by the Syrian government. - THOMAS LOHNES/AFP via Getty Images)

The international community must step up its pursuit of truth, justice and reparations for the many victims of Syria’s brutal civil war, the United Nations High Commissioner for Human Rights Michelle Bachelet said Thursday.

“This past decade has seen a blatant disregard for the protection of civilians by all parties, who have committed countless violations and abuses, some of which may amount to war crimes and crimes against humanity,” Bachelet said.

“We owe it to the victims to ensure the next decade is one of accountability and remedy, with their rights and needs to be addressed so they can rebuild their lives," she said.

Syria on Monday will mark the 10-year anniversary of the beginning of its conflict. Peaceful protests against the decadeslong Assad family rule in 2011 were met with deadly force by the government, spawning a full-blown civil war that’s since killed 400,000 people, driven more than 11 million people from their homes and pushed countless more deeper into poverty.

“The situation remains a living nightmare,” UN Secretary-General Antonio Guterres said Wednesday, adding that 60% of the Syrian population is at risk of hunger this year.

A new survey by the International Committee of the Red Cross highlights the heavy toll the war has taken on young Syrians in particular. Nearly one in six had at least one parent killed or wounded during the war, and more than half missed out on some or all of their education.

Bachelet called a German court’s recent conviction of a former Syrian intelligence officer “an important step forward on the path to justice.” The landmark trial concluded last month with the sentencing of Eyad al-Gharib to four and a half years in prison for crimes against humanity.

Unable to achieve justice in Syria’s courts or at the International Criminal Court, where referrals at the UN Security Council are blocked by Assad-backers Russia and China, victims are making use of broad universal jurisdiction laws in third countries like Germany to hold the Syrian government accountable for the myriad human rights violations committed during the war.

"It remains vital that national courts continue to conduct fair, public and transparent trials, and reduce the accountability gap for such serious crimes," said Bachelet.

Anwar Raslan, a former colonel in the Syrian army accused of torturing opposition activists, is currently on trial in Koblenz, Germany. Separately, German authorities arrested a doctor in June accused of torture in one of the Syrian regime’s notorious detention centers.

Rights organizations have continued to document the widespread abuse of regime prisoners, the fate of tens of thousands of whom is unclear, the UN says.