Eyad al-Gharib, a former low-ranking officer in Syria's intelligence services, was sentenced to four and a half years in prison for aiding and abetting crimes against humanity. 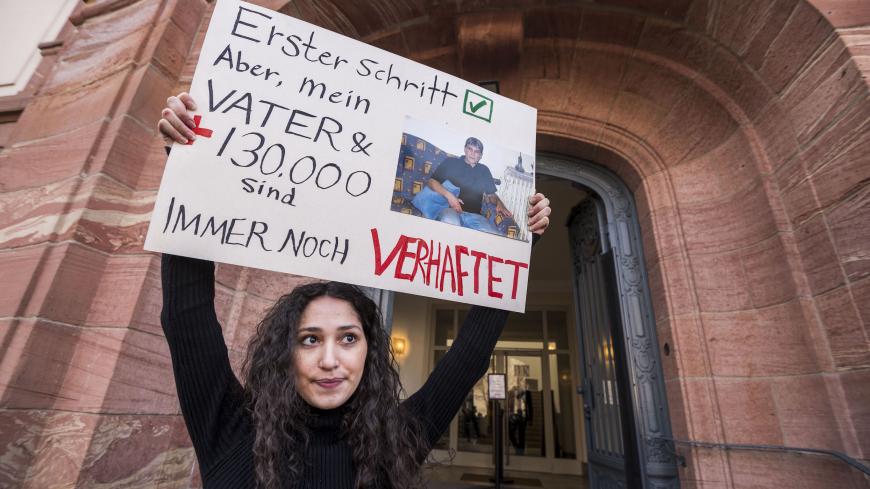 Sedra Alshehabi stands with a placard with a sign bearing a picture of her father Ali and German text reading "First step but my father and 130,000 are still in jail" after Syrian defendant Eyad al-Gharib was convicted of crimes against humanity in the first trial of its kind to emerge from the Syrian conflict on Feb. 24, 2021 in Koblenz, Germany. - THOMAS LOHNES/AFP via Getty Images

A court in Germany has convicted a former member of Syria’s security services of crimes against humanity in a landmark trial seen as the first step in holding the regime of President Bashar al-Assad accountable for state-sponsored torture.

Eyad al-Gharib, 44, was sentenced on Tuesday to four and a half years in prison. Prosecutors at the Koblenz Higher Regional Court accused the former colonel of helping arrest and transport at least 30 pro-democracy protesters to a notorious military intelligence prison in Damascus, known as Branch 251, in 2011.

Gharib’s state-appointed lawyers said their client, who was a low-ranking officer in Syria’s powerful General Intelligence Directorate, was acting under duress and feared punishment from his superiors for failing to carry out their orders. His defense team pointed out that Gharib defected from the regime before fleeing to Germany in 2018 and has apologized for his actions.

Anwar al-Bunni, a former Syrian detainee and human rights lawyer living in Germany, called the conviction “a message to all criminals who still commit the most horrific crimes in Syria that the time of impunity is over.”

“You will not find a safe place to go to,” al-Bunni said in a statement.

The verdict came nearly 10 years after Syria’s uprising, which started as peaceful protests against the decades-long Assad family rule and grew into a civil war that’s since killed 400,000 people and driven more than 11 million people from their homes.

Gharib and many other former regime officials fled to Europe, where they have been living as refugees. In recent years, domestic courts in Germany, France and other European countries have taken on Syrian war crimes cases, relying on the concept of universal jurisdiction, which allows for the prosecution of grave crimes committed in another country.

“The goal must continue to be to bring high-ranking officials of Assad’s security apparatus to justice. They are responsible for abusing, torturing and executing tens of thousands of people in Syria — not just over the past several years; even today,” Kaleck said in a statement.

The main defendant in the case, Anwar Raslan, is still on trial. Raslan is accused of overseeing the torture of opposition activists between 2011 and 2012. Prosecutors say that Raslan, a former colonel in the Syrian army who ultimately defected, was aware of the massive violence that occurred under his watch.

The Syrian government continues to use its vast network of prisons to torture and execute the opposition. The Syrian Network for Human Rights, a local monitoring group, estimates 99,000 people are missing in Syria, a majority of whom are detained by the regime.

In June, Germany arrested a doctor accused of torture in one of the Syrian regime’s notorious detention centers. Both France and Germany have also issued arrest warrants for Jamil Hassan, the former head of Syria’s air force intelligence services.