Anwar Raslan is the highest-ranking former Syrian government official to be tried for crimes committed in Syria's civil war. 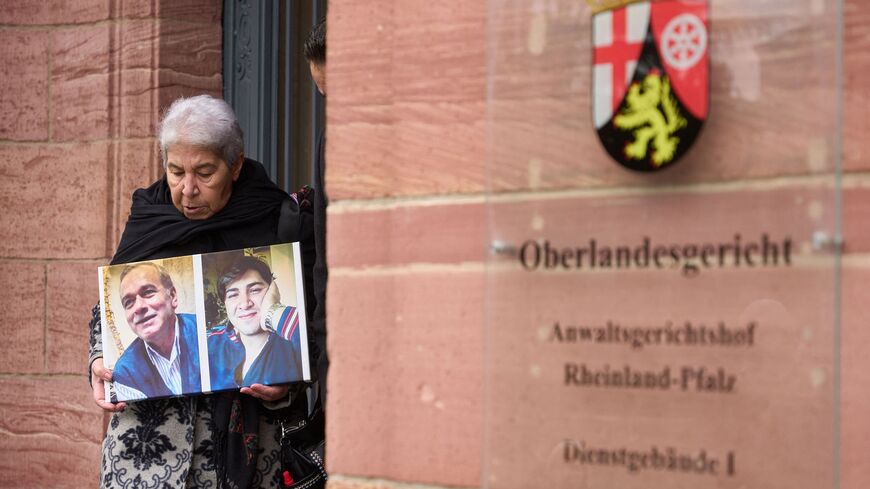 Syrian Fadwa Mahmoud holds a photo of her son and partner as she leaves the courthouse on Jan. 13, 2022, in Koblenz, western Germany, where former Syrian intelligence officer Anwar Raslan was sentenced to life in jail for crimes against humanity in the first global trial over state-sponsored torture in Syria. - THOMAS FREY/AFP via Getty Images

A German court has convicted a former Syrian intelligence officer of crimes against humanity and sentenced him to life in prison in a historic verdict that represents a small but significant step toward holding the regime of President Bashar al-Assad accountable for state-sponsored torture.

Anwar Raslan, a 58-year-old former colonel in the Syrian army, is the highest-ranking government official to be put on trial for crimes committed during Syria’s decade-long civil war.

On Thursday, a court in the western German city of Koblenz found Raslan guilty of overseeing the murder of at least 27 people at the notorious military intelligence prison in Damascus, known as Branch 251, between 2011 and 2012. He denied participating in torture.

Raslan ultimately defected and fled Syria in the early years of the civil war before later entering Germany as an asylum seeker. Federal police arrested him in February 2019 as part of a coordinated effort between French and German authorities.

The case, which began in April 2020, included testimony from more than 80 witnesses and a number of torture survivors who joined the case as joint plaintiffs. Key evidence also included photographs smuggled out of Syria in 2013 by a Syrian military defector who goes by the pseudonym "Caesar.”

Because Syria is not a member of the International Criminal Court, torture victims have sought other venues for justice. In the Raslan trial, prosecutors relied on Germany’s sweeping universal jurisdiction law, which allows for the prosecution of grave crimes committed in another country, regardless of whether a German national was involved.

The Koblenz Higher Regional Court also sentenced Raslan’s co-defendant, Eyad al-Gharib, to four and a half years in prison in February. Gharib, a lower-ranking officer, was convicted of crimes against humanity for helping arrest and transport at least 30 pro-democracy protesters to Branch 251 in 2011.

The Syrian Center for Legal Studies and Research, which helped build the cases against Raslan and Gharib, called the conviction Thursday “a message of hope to the victims.”

“The decision to sentence Anwar Raslan is a message to all the criminals who continue to commit the most heinous crimes in Syria, and to inform them that the time of impunity is over,” the Berlin-based group said.

The historic verdict in Germany comes as crimes continue in Syria, with hundreds of thousands detained, forcibly disappeared and presumed killed by regime forces.

Other national courts, mainly in Europe, where some perpetrators have fled, have taken up similar war crimes cases using their own interpretations of universal jurisdiction. Both France and Germany have issued arrest warrants for Jamil Hassan, the former head of Syria’s air force intelligence service.

As head of state, Assad has immunity from prosecution in other countries. But the German federal public prosecutor is also collecting evidence on crimes personally committed by Syria’s president, which could be used against him by the International Criminal Court or a special United Nations tribunal when he is out of office.

Courts and the law
Syria Conflict