Palestinians continue to fight for their rights to their properties and homes in the Sheikh Jarrah neighborhood of East Jerusalem, thanks to the support of Jordan that has historical documents proving their ownership. 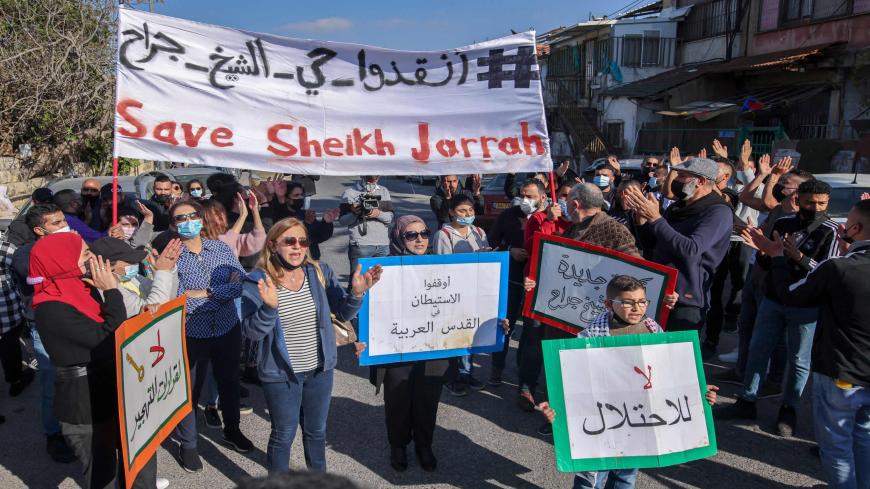 Palestinian, Israeli and foreign activists lift banners and placards during a demonstration against the Israeli occupation and settlement activity in the Palestinian territories and East Jerusalem, Sheikh Jarrah neighborhood, Jerusalem, March 19, 2021. - Ahmad Gharabli/AFP via Getty Images

The 28 families living in this East Jerusalem neighborhood were homeless refugees from the Nakba, or catastrophe, that expulsed Palestinians from their homeland in 1948. Jordan allowed the United Nations Relief and Works Agency (UNRWA) to build 28 simple homes in 1956 as part of an agreement with the UN. Their rental agreement is preserved in the Jordanian archive and Israel has a copy of it. However, the latter now refuses to recognize it, even though it initially did — an Israeli court rejected the eviction of the families from their homes in 1972.

Jordan, which was in charge of East Jerusalem at the time, signed an agreement with UNRWA allowing these homes to be built on abandoned properties. Since its occupation, Israel has retained the tenant protection law. However, Israeli settlers are trying to evict the Palestinian families questioning that they had legitimate rental agreements.

Hidmi praised Jordan for its “continuous support of the people of Jerusalem, specifically the cooperation with the Palestinian Ministry of Foreign Affairs to provide lawyers in Jerusalem with authorized original documents that show the rights of the residents of Sheik Jarrah and debunk Israeli claims.”

Wasfi Kailani, executive director of the Hashemite Fund for the Restoration of Al-Aqsa Mosque and the Dome of the Rock, told Al-Monitor that what we need is “steadfastness and courage” to challenge injustice and the replacement policy. He confirmed that Jordan supplied the lawyers with all the available relevant documents about the 1956 agreements with UNRWA regarding the 28 tenants in Sheikh Jarrah. But, he added, the original rental documents were possibly in East Jerusalem when the 1967 occupation occurred and are most likely with the Israelis.

Kailani added, “As long as Jordan has copies of the agreement with a full list of the rental contracts, the Israeli courts must recognize them. But it is unjust legal discrimination in favor of the settlers who recently bought the land illegally and without property proof by the owners. The Israeli courts at least know the property is contested and can never be granted to settlers just because they are Jews.”

Jessica Montel, executive director of Hamoked, an Israeli Human rights organization working in Jerusalem, told Al-Monitor that the Israeli courts are “an accomplice” to the forced displacement of entire families, with the explicit goal of replacing Palestinians with Israeli settlers in these neighborhoods. “The hypocrisy is quite blatant. Whereas Jews can reclaim property in East Jerusalem that they owned before 1948, the court has sealed off any option for Palestinians to reclaim property in West Jerusalem,” she said.

The official Palestinian news agency WAFA quoted Hidmi as saying March 15 that driving Palestinians out of their homes in the city is purely politically motivated and is aimed at implementing colonial settlement plans. “What is taking place is a systematic programmed process of replacing the Palestinians expelled from their land and property with foreign settlers,” he added.

Dana Mills, director of development and external relations in the Israeli organization Peace Now, agrees. She told Al-Monitor that the case of attempts to settle Sheikh Jarrah is not legal, but political. “The court is only the tool by which settlers — with the close assistance of state authorities — use to commit the crime of displacing an entire community and replacing it with the settlement.”

Mills said that the Israeli government and settlers have no problem displacing thousands of Palestinians in Sheikh Jarrah and Silgan in the name of Jewish rights to properties before 1948, while they strongly claim that the millions of Israelis living in Palestinian properties before 1948 cannot be evicted. “Since the evacuation of the Moghrabi neighborhood for the purpose of expanding Western Wall Plaza in 1967, there has been no such deportation in Jerusalem. The government can still stop this injustice.”

Nabil Abu Rudeineh, spokesman of the Palestinian presidency, also condemned “the endless Israeli assaults against the Palestinian people,” adding that these measures “will not bring peace to anyone.”

Palestinians in East Jerusalem, a part of the internationally recognized Palestinian territory that has been subject to Israeli military occupation since 1967, are denied their citizenship rights and are instead classified only as “residents” whose permits can be revoked if they move away from the city for more than a few years.

Israeli policies in Jerusalem and other occupied areas are biased in favor of Jewish settler organizations while denying the rights of hundreds of thousands of Palestinians whose homes in Israel have been retained by Israel. The case in Sheikh Jarrah exposes Israeli hypocrisy and bias in applying the laws to Jewish Israelis and denying them to Palestinian Arabs.