With Netanyahu vulnerable, Israel again ignored by Washington on Iran

Knowing he is politically vulnerable, Prime Minister Benjamin Netanyahu is silent on Washington’s intention to return to the nuclear deal with Tehran. 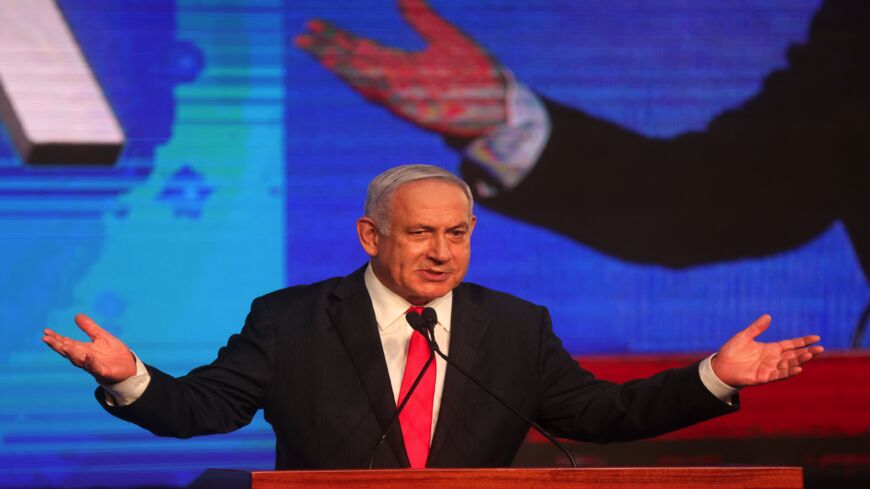 Israeli Prime Minister Benjamin Netanyahu, leader of the Likud party, addresses supporters at the party campaign headquarters in Jerusalem early on March 24, 2021, after the end of voting in the fourth national election in two years. - EMMANUEL DUNAND/AFP via Getty Images

Israel finds itself irrelevant and inconsequential as the race against the Iranian nuclear threat enters its most important leg. As was the case on the eve of the 2015 signing of the nuclear deal known as the Joint Comprehensive Plan of Action, with world powers curbing Iran’s nuclear program, Israel once again finds itself being ignored by Washington.

This state of affairs stems from the uncertain standing of the ultimate purveyor of Iran’s demonization, Prime Minister Benjamin Netanyahu. As he mounts his possibly final battle for political survival and personal freedom, unable to form a government and facing the start of the evidentiary stage of his corruption trial, he is injured, vulnerable and devoid of influence in Washington.

Netanyahu has barely uttered the word “Iran” in public in recent days, a sharp contrast to his incessant harping on the Islamic Republic over his past 12 years in power. Previously, when reports emerged from Washington that the new administration was considering an easing of sanctions on Iran or suggesting that Iran does not necessarily have to be the first to return to the agreement, Netanyahu would have been ringing alarm bells around the globe and delivering speeches rife with apocalyptic visions and pathos-infused threats. These days, he is silent. Even he understands the lay of the land, preferring to focus on his personal existential struggle rather than on Israel’s, at least for now.

At the same time, the arena between Israel and Iran is heating up. Reports that Israel had sent in the past few years an elite naval commando unit to attack dozens of Iranian tankers carrying oil exports in contravention of international sanctions, causing it billions of dollars in damage, have further muddied the waters of the undeclared war between the sides. Israel has not assumed responsibility for these attacks, but the reports in The Wall Street Journal and The New York Times did not leave much to the imagination in this regard.

At the same time, two Israeli-owned cargo vessels were attacked recently in the Gulf. The second, owned by Israeli businessman Udi Angel, was struck by two missiles on March 25 as it was making its way from Africa to India. Israel attributes these attacks to Iran, and this latest deterioration could conceivably generate additional violence.

The intimate dialogue Israel expected with the new Biden administration, giving it an opportunity to explain its position on Iran, to show the Americans highly classified intelligence and provide a comprehensive briefing on the 2015 deal with Iran and its many lacunas, never materialized. Officially, contacts are said to be underway between the National Security Council in Washington and Israel’s National Security Council. In fact, these come down to a few Zoom conversations during which national security adviser Meir Ben-Shabbat tried to convey pointed messages, but his ability to make an impression, and on Zoom, at that, is limited to non-existent.

“The Americans are not really taking us into consideration at this point,” a senior Israeli security source told Al-Monitor on condition of anonymity. “The issue is not high on their agenda; they are busy dealing with the coronavirus and then with Russia and China. The Middle East is in fourth place, and there is no certainty that the Iranian nuclear agreement is even the most dominant issue in the region,” he added.

The situation on the ground is even worse. According to information reaching Jerusalem, official and quasi-official Biden administration emissaries are courting Iran intensively, conducting contacts, sending envoys, writing letters and documents. The contacts are both official and unofficial, some through mediators, usually European ones.

The Iranians are taking a simple, tough line. They are simply unwilling to hear from the Americans or to engage in any sort of negotiations as long as the United States refuses to return unilaterally to the original deal with Tehran and lift its sanctions on the regime. “It’s embarrassing,” an Israeli source familiar with these developments told Al-Monitor on condition of anonymity. “The Americans are investing much more effort in the Iranian side than in trying to understand our side, but the Iranians are not blinking, for now,” according to the source.

The country facilitating Iran’s current tough stance is China. The agreement on strategic cooperation and investment signed on March 27 between Beijing and Tehran is of great concern to Israel. “The Iranians succeeded, big time, in withstanding the harsh sanctions imposed on them, using various means, including oil smuggling and secret cooperation with various countries,” a senior Israeli security source told Al-Monitor on condition of anonymity. “Publication of an agreement of this magnitude between Iran and China greatly boosts Iran’s self-confidence and weakens the American bargaining power. This is a negative development of strategic proportions,” he added.

The Israeli side sounds considerably desperate. Netanyahu still has some “big guns” at his disposal, namely Mossad Chief Yossi Cohen who has been nurturing a close working relationship with US officials whom he met during the Obama administration and are now key players in the Biden administration. Al-Monitor has learned that Cohen, whose term ends in June, will soon depart for Washington to discuss the Iran issue. He will try to affect change in the US position, but he realizes that this time his mission will be particularly difficult.

“The Americans are simply in a totally different place,” a senior Israeli diplomatic source sums up, speaking on condition of anonymity. “As far as they are concerned, the whole Iran issue can be checked off by returning to the international agreement that defines the Iranian nuclear project and blocks it for as long as possible, and that’s that. They probably want to charge ahead with the agreement and have pretty much given up on making significant amendments to it.”

This development is generating grave concern, not only in Israel. “All of our strategic partners in the region are no less concerned, and perhaps even more than we are,” the senior Israeli security source told Al-Monitor. “The UAE, Saudi Arabia, Bahrain, Jordan, even Qatar — all these states know the significance of these developments, and many in the region’s capitals are losing sleep over them.” The problem is that in the most important capital of all, Washington, no one is really worried. They have other problems.