The United Nations said the operation in al-Hol interfered with humanitarian services, but the US military, which supported the operation, said the disruption was minimal. Violence has increased greatly in the camp this year. 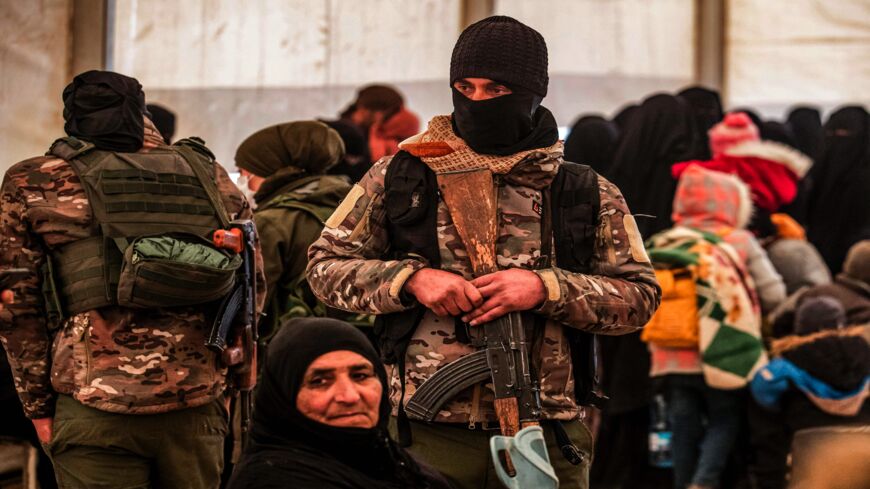 A member of the Syrian Kurdish internal security services known as Asayish stands guard during the release of persons suspected of being related to Islamic State (IS) group fighters from the Kurdish-run al-Hol camp in Hasakah governorate in northeastern Syria, on Jan. 19, 2021. - DELIL SOULEIMAN/AFP via Getty Images

Northeast Syrian security forces conducted a security raid on Sunday at the notorious al-Hol camp housing many Islamic State (IS) families. There has been an outbreak of violence in the camp this year amid a slow repatriation process for detainees.

Al-Hol houses around 62,000 people with varying degrees of affiliations to IS in northeast Syria near the Iraqi border. Women and children make up the majority of the population. Many are the wives and kids of IS fighters, but others are displaced people who were living in IS territory when the SDF defeated IS. The majority of its inhabitants are Syrians and Iraqis, but there are several thousand foreigners as well from Europe, the former Soviet Union, East Asia and other areas.

The operation was conducted by 5,000 Asayish officers with the help of the SDF. The Kurdish-led SDF is the main military force in the Autonomous Administration of North and East Syria. The Asayish refers to the internal security force in the region, and these two groups control al-Hol along with civilian administration officials. The administration is led by the Kurdish political group the Democratic Union Party, and its territory has a mixed population of Kurds, Arabs, Syriac Christians and others.

The US-led, anti-IS coalition also provided intelligence support and was nearby during the operation, The Associated Press reported. The SDF receives considerable military support from the coalition.

Coalition spokesman US Army Col. Wayne Marotto praised the operation in a statement. He said the operation continued on Monday, and the Asayish transferred an Iraqi resident to a hospital at the time after he was shot by IS.

“The exercise has forced the suspension of many humanitarian services,” he said in a statement on Monday. “Residents, including children, are being screened, and their tents are being searched.

Lowcock said he is concerned that residents’ rights could be violated by the security checks.

“Security must be provided in a manner that does not endanger residents or violate their rights and that does not restrict humanitarian access,” he said.

Al-Hol has long suffered from poor living and security conditions, but the security situation has deteriorated even further this year. Two teenagers were killed this month, and in February, a Doctors Without Borders employee was killed while in the tent they were living in. The 20 killings in al-Hol in January constituted three times more than the monthly average.

Local authorities have repeatedly called on foreign governments to take back their citizens from camps in northeast Syria. There were several repatriations last year, including from Germany, Finland, France and Uzbekistan. Other governments have skirted responsibility. In February, Australia revoked the citizenship of an alleged IS associate who crossed into Turkey from Syria, citing security concerns.