Killings on the rise in Syria's al-Hol camp

There were far more deaths than usual in the camp for Islamic State families in January amid calls from the United Nations and Kurdish forces for countries to take back their citizens. 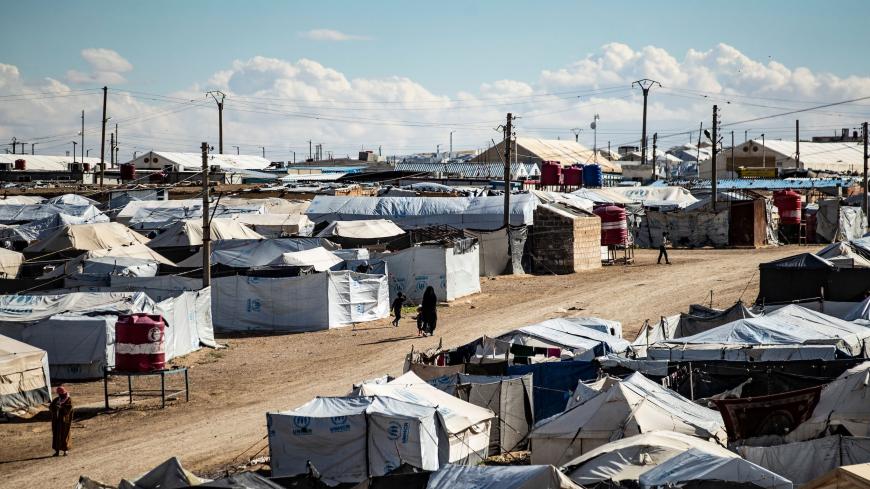 People walk among tents at the Kurdish-run al-Hol camp that holds suspected relatives of Islamic State (IS) group fighters, in the northeastern Syrian Hasakah governorate, on Feb. 17, 2021. - DELIL SOULEIMAN/AFP via Getty Images

There was a deadly uptick in violence in the notorious al-Hol camp in northeast Syria last month.

A total of 20 men and women were killed in the camp for Islamic State (IS) families in January. The killings included deadly shootings of a local official and a policeman, as well as the beheading of an Iraqi man. This constitutes nearly triple the average number of murders in the camp per month, The Associated Press reported on Thursday.

Al-Hol is home to around 62,000 people, mostly women and children. The majority of the camp’s residents are from Syria and neighboring Iraq, but there are also several thousand foreigners from all over the world who came to join IS. Many people there are the wives and children of IS fighters, but allegiance to the group varies among the population. Others are displaced people who were living in IS territory.

The US-backed and Kurdish-led Syrian Democratic Forces (SDF) control the camp. The SDF defeated IS territorially in 2019, but IS remains active in Syria.

The killings were carried out by IS loyalists against people they perceived to be enemies, according to the AP.

The United Nations has warned about dangerous living conditions in al-Hol in recent weeks.

“Thousands of people held in the camps are exposed to violence, exploitation, abuse and deprivation in conditions and treatment that may well amount to torture or other cruel, inhuman or degrading treatment or punishment under international law, with no effective remedy at their disposal,” said the UN Human Rights Council on Feb. 8. “An unknown number have already died because of their conditions of detention.”

The UN reported 12 murders of Syrian and Iraqi residents between Jan. 1-16.

Both the UN and the SDF have repeatedly called on countries to take back their citizens from al-Hol and other detention centers for IS affiliates in northeast Syria. The response by the international community has been mixed, with some states taking back their citizens and others shrugging off responsibility. This week, Australia revoked the citizenship of an alleged IS member who fled Syria to Turkey. On the other hand, Germany and Finland repatriated dozens of women and children from al-Hol in December.