New infections are ravaging Jordan, where vaccination efforts are lagging far behind what health experts say is needed. 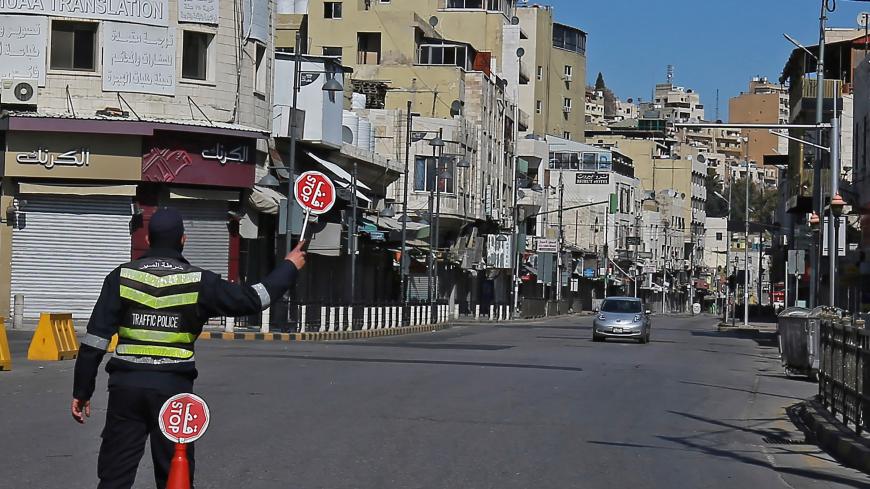 A policeman holds a stop sign in an almost deserted avenue in the Jordanian capital Amman during a lockdown due to the coronavirus pandemic on Feb. 26, 2021. - KHALIL MAZRAAWI/AFP via Getty Images

The Jordanian government is scrambling to reinstate partial lockdown measures in a bid to contain what medical experts here described as a third wave of the coronavirus, the worst the country has seen since the World Health Organization sounded the pandemic warning a year ago. On March 10 the government extended the night curfew, maintained the full Friday lockdown, suspended Friday and Sunday prayers and closed restaurants, parks and sports clubs until the end of March. The day before, the government suspended in-class teaching in schools and universities until further notice.

Minister of State for Media Affairs Sakher Dudin said on March 9 that the government would avoid imposing extended lockdowns so as not to exasperate the country's economic situation. Jordan was hailed last year for imposing a full nationwide lockdown that quickly contained the spread of the virus.

Daily cases have spiked since the middle of February, reaching more than 6,000 in the past week. On March 10 the Ministry of Health reported 6,649 new cases and 60 deaths, bringing the total cumulative cases to 448,851 and deaths to 5,016, one of the highest fatality rates in the world. But medical experts warned that limited testing means the actual number of daily infections is much higher.

On March 10 Minister of Interior Mazen Al-Farrayeh said that Jordan registers a new case every four minutes and one death every 20 minutes as a result of the pandemic.

Jordanians have become critical of what they see as a slow government response in administering vaccinations, a process that began in January. According to the Johns Hopkins University Coronavirus Resource Center, only 150,000 doses have been administered so far and only 30,000 Jordanian are fully vaccinated. By early March only 450,000 Jordanians and residents had registered to receive the vaccination, according to Farrayeh.

Last month Prime Minister Bisher Al-Khasawneh said that Jordan is seeking to procure vaccines from different sources, adding that it had already received limited doses of China’s Sinopharm and the United States' Pfizer vaccines. On March 10 the kingdom’s Food and Drug Administration approved Russia’s Sputnik V vaccine and the government said it will receive doses within a month.

Political commentator and editor of the digital forum Black-iris.com Naseem Tarawnah told Al-Monitor that the government has indeed been slow to take action on vaccines. “Imagine if resources invested in the political theater of the November elections and the two government reshuffles had gone to securing vaccines, communicating a clear inoculation plan and combating misinformation. Jordan might be in a very different situation.”

Columnist Fahd Al-Khitan agrees that the government has failed Jordanians on the recent spike. He wrote for Al-Ghad March 8, “It is not the first time that the public has been misled by health officials and we still don’t know how we will flatten the curve and when.” He added that while “vaccine supplies will arrive by the end of this month, we still have a problem with supply chains, which means at the present rate we will need more than three months to vaccinate half a million residents.”

Khitan concluded that with new variants of the virus now reaching the kingdom, “We need to impose wider lockdowns while accelerating the inoculation process and that’s what worked in other countries.”

Head of the coronavirus portfolio of the Ministry of Health Wa’el Al-Hayagneh admitted that the biggest challenge facing the health sector is in the capital Amman. He told Al-Monitor that Amman’s hospital capacity has already reached its limit, especially concerning ICU beds. “We need to adopt stricter measures but we are also aware of the negative effects such measures will have on the economy,” he said. “So far we are avoiding the option of a full and lengthy lockdown.”

But Dr. Bassam Al-Hijjawi, a member of the kingdom’s Epidemics Committee, believes that a full lockdown cannot be avoided. “We as a committee have called on the government to impose a nationwide full lockdown in order to contain the rate of infections,” he told Al-Monitor. “Another challenge is to convince people to register for vaccination. So far only 450,000 have registered and the number of those who have gotten the two jabs remains small,” he said.

Meanwhile, head of the Doctors Association Dr. Mohammed Al-Tarawnah warned in a March 8 interview of new virus mutations that could hit the country. He said that more infections mean a higher probability of mutations and suggested that the government restrict travel by air, especially to and from countries where new strains have emerged.