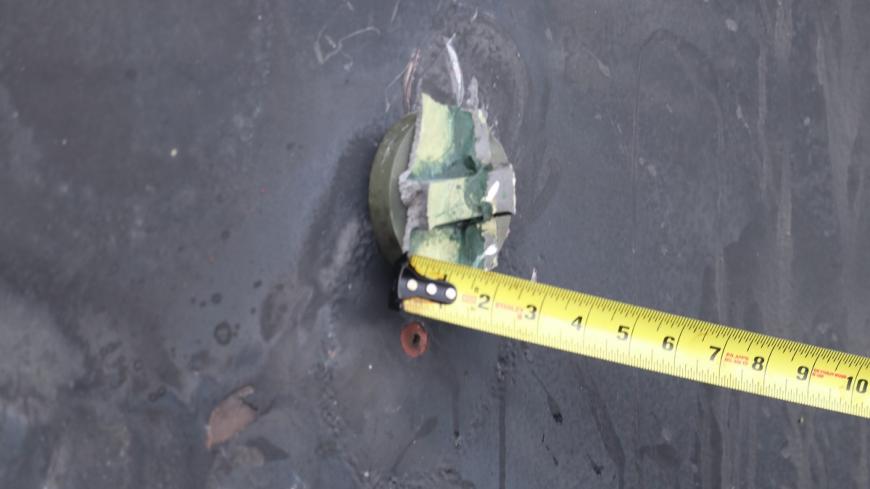 This June 14, 2019, shows aluminum and green composite material left behind following removal of an unexploded limpet mine used in a suspected Iranian attack on the starboard side of motor vessel M/T Kokuka Courageous in the Gulf of Oman. Limpet mines are attached to a vessel via magnets. The Wall Street Journal reported on March 12, 2021, that Israel has also used such mines against Iranian vessels. - US Department of Defense via Getty Images

A series of sabotage incidents on Iranian tanker ships headed to Syria in recent years were carried out by Israel, The Wall Street Journal reported Friday.

More than a dozen Iranian tankers were hit with sea mines and limpet mines en route to Syria, where they were scheduled to offload fuel to aid the cash-strapped regime in Damascus in violation of US and international sanctions on Syria and Iran.

The sabotage incidents began in 2019, the Journal reported, and have included attacks on weapons cargo. Some of the attacks have reportedly received tacit US support.

The United States has provided intelligence and military support for that airstrike campaign since 2018, Al-Monitor has previously reported.

The United States accused Iran of staging limpet mine attacks in the Persian Gulf against commercial tanker ships in 2019. The incidents fueled intense tensions between Washington and Tehran, which eventually culminated in tit-for-tat rocket and airstrikes in Iraq and the US killing of Iranian Quds Force commander Qasem Soleimani.

The commander of US forces in the Middle East, Gen. Kenneth “Frank” McKenzie, has said US military posturing in the region has deterred Iran’s further attacks. Yet attacks by Iran’s proxy militias in the region on international military bases in Iraq and on oil infrastructure in Saudi Arabia have continued.

Last month, Israeli Prime Minister Benjamin Netanyahu accused Iran of being behind an explosion on a cargo ship owned by an Israeli businessman connected to the country’s intelligence chief.