Russia continues to seek opportunities to expand its influence in the Middle East, the head of CENTCOM said Monday. 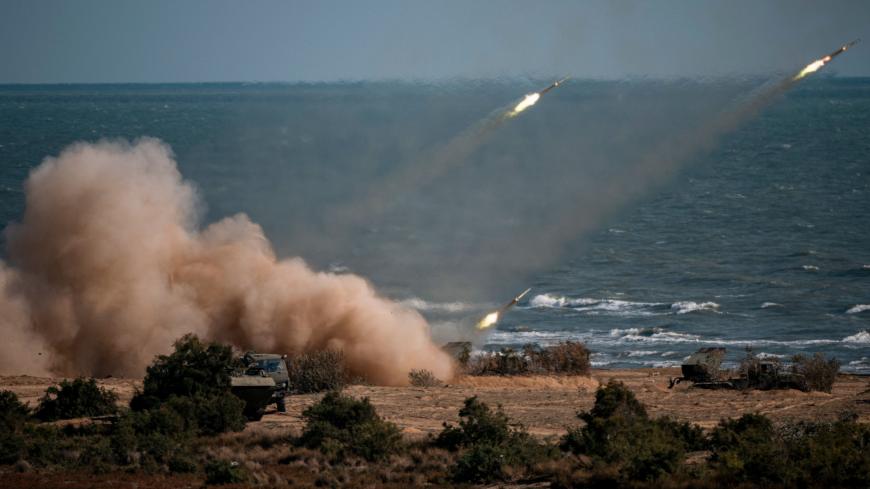 Rockets launch from missile systems at the Turali range on the Caspian Sea coast in the republic of Dagestan in southern Russia on Sept. 23, 2020, during the "Caucasus-2020" land and sea exercises gathering troops from China, Iran, Pakistan and Myanmar, as well as from Armenia, Azerbaijan and Belarus. - DIMITAR DILKOFF/AFP via Getty Images

Russia, China and Iran will kick off a joint naval exercise in the northern Indian Ocean this month, the Kremlin’s ambassador to Iran said Monday.

Ambassador Levan Dzhagaryan told Russia’s RIA news agency that the exercises would include search and rescue and shipping safety drills.

In December 2019, the three countries held a joint naval exercise in the Indian Ocean and the Gulf of Oman as tensions escalated between Washington and Tehran.

Six months prior to that exercise, two civilian oil tankers were bombed in an attack the United States blamed on Iran’s Islamic Revolutionary Guard Corps (IRGC), though officials in Tehran denied responsibility.

The attack led Gulf countries and Western allies led by the United States to form an international naval security task force, known as Task Force Sentinel, to deter harassment and seizures of maritime vessels in the Persian Gulf region.

Iran seized a South Korean tanker in the Persian Gulf in January, citing an “environmental pollution” violation. Observers suspected the seizure may have been related to Seoul’s freezing of some $7 billion in Iranian oil revenue after the Trump administration tightened sanctions on Iranian oil exports.

Last month Indonesia seized two tankers, one Iranian-owned and the other owned by a company in Shanghai, accusing them of transferring illegal oil between the ships. Indonesia’s coast guard denied the seizure was related to US sanctions.

With its economy suffering in recent years amid sanctions imposed by the Trump administration, Iran has sought to ship petroleum to Venezuela and Syria, two countries also under heavy US sanctions.

Last year, the United States worked with authorities in Cape Verde to seize Iranian-owned fuel onboard four tankers bound for Venezuela in what the US Justice Department said was the largest seizure of Iranian petroleum shipments to date. US federal prosecutors alleged the fuel was shipped on behalf of the IRGC, which the Trump administration designated a terrorist organization in 2019. The United States has seized some $7 million worth of Iranian assets in its crackdown on Tehran's attempts to evade US sanctions.

The United States has also put on a military show of force in the Persian Gulf region in recent months amid threats of revenge from Iranian leaders for the death of Quds Force commander Qasem Soleimani in a US drone strike in January 2020. Iran has since conducted its own military exercises, including naval missile drills, in the Gulf of Oman.

On Monday, the commander of US military forces in the Middle East, Gen. Kenneth “Frank” McKenzie, signaled that Iran's activities remain the United States' greatest concern in the region. He also said Russia seeks to expand its influence in the Middle East via transactional relationships with regional governments.

The commander has previously described Russia's inroads in the Middle East as opportunistic, and suggested China may pose a greater long-term threat to US dominance in the region. Late last year, Russia held joint naval exercises with Egypt in the Black Sea for the first time.

In its final weeks, the Trump administration internally debated cutting off all US military aid to Egypt over Cairo's purchase of Russia's Su-35 fighter aircraft, but wound up deciding not to do so.

The US administration of President Joe Biden is seeking to reenter the 2015 nuclear agreement with Tehran, but Iranian leaders have said Washington must first lift sanctions. Russia has expressed support for Tehran's position.