Families of the three Israeli youths kidnapped and killed in 2014 wonder why the ICC would not start with an investigation into these murders. 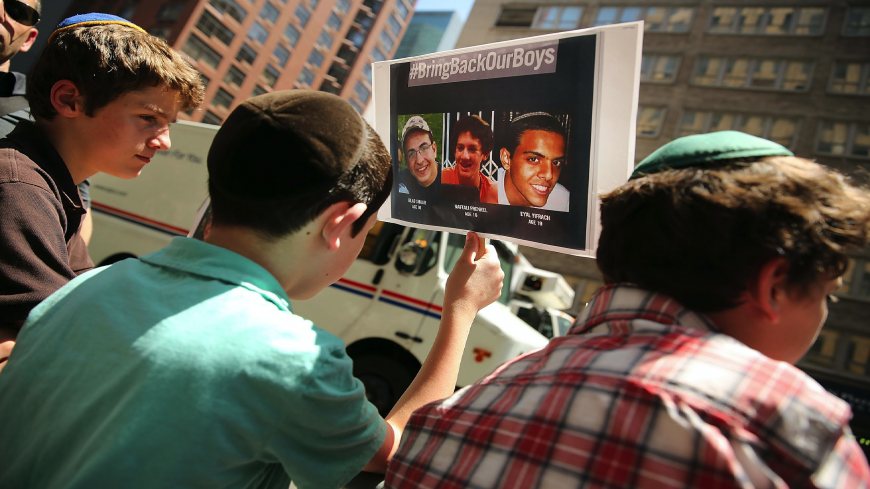 People gather for a vigil for the three missing Israeli teens outside of the Israeli Consulate on June 16, 2014 in New York City. According to the Israeli defense Forces (IDF), Gilad Shaar (16) Naftali Frenkel, (16) and Eyal Yifrach (19) have been missing since late Thursday or Friday and were last seen around Gush Etzion. Israeli soldiers have detained over 150 Palestinian suspects in the search for the three teens.

Families of the three Israeli youths kidnapped and murdered in the West Bank on June 12, 2014, condemned the decision by International Criminal Court (ICC) Prosecutor Fatou Bensouda to open a probe against Israel, specifically over events that took place in Palestinian territories that year.

Reportedly, Bensouda intends to investigate incidents that occurred during the 2014 Gaza war that began June 13 that year. In other words, the ICC will not look into the kidnappings and murders of Eyal Yifrach, Gil-Ad Shaer and Naftali Frenkel.

In an open letter to the ICC, the families of Yifrach, Shaer and Frenkel said Bensouda’s decision was cruel and cynical. "Had Prosecutor Fatou Bensouda truly wanted to investigate war crimes and crimes against humanity, she would have instructed [the court] to open a probe on the great crime that took place just the day before, on June 12, when our three children were kidnapped — three Jewish boys who only wanted to come home safely," they wrote.

The letter of the families adds another layer to this already very sensitive issue. Not only do many Israelis perceive the ICC as bias and politically motivated, but it has also become a personal matter. The ICC could very well target now former and current senior Israel Defense Forces (IDF) officers as well as Israeli politicians who held senior positions at the time of the 2014 Gaza war.

Such is the case of current Defense Minister Benny Gantz, who also holds the justice portfolio. Gantz served as IDF chief between 2011 and 2015. An ICC probe into that period could concern him personally.

In recent days, Gantz discussed the issue with several counterparts in other countries. On March 4, he spoke on the phone with German Defense Minister Annegret Kramp-Karrenbauer, thanking her for her country's support of Israel in opposing the ICC decision. The same day, he also spoke with French Armed Forces Minister Florence Parly, urging France to act to help Israel deal with the probe.

In the past few days, Gantz has taken every possible opportunity to stress that he will defend any Israeli targeted by the ICC and that Israeli soldiers must not be afraid at the battlefield of possible legal pursuits from the ICC. After presenting at the Knesset today his proposal for awarding South Lebanon Army soldiers, Gantz tweeted, "I took the opportunity [of speaking from the Knesset podium] to tell all IDF soldiers that they have full backing to defend themselves against any enemy that endangers them, according to the orders and regulations on opening fire. The backing is from me, through the IDF chief and up until the very last of the commanders."

Yisrael Beitenu leader Avigdor Liberman also slammed the ICC. Liberman, who served as defense minister in 2016, had criticized on March 3 a “delusional decision” by Bensouda, tweeting that the move “screams hypocrisy and anti-Semitism.”