Yesh Atid leader Yair Lapid has not declared himself a candidate for prime minister, but he is clearly positioning himself as the real threat to Prime Minister Benjamin Netanyahu. 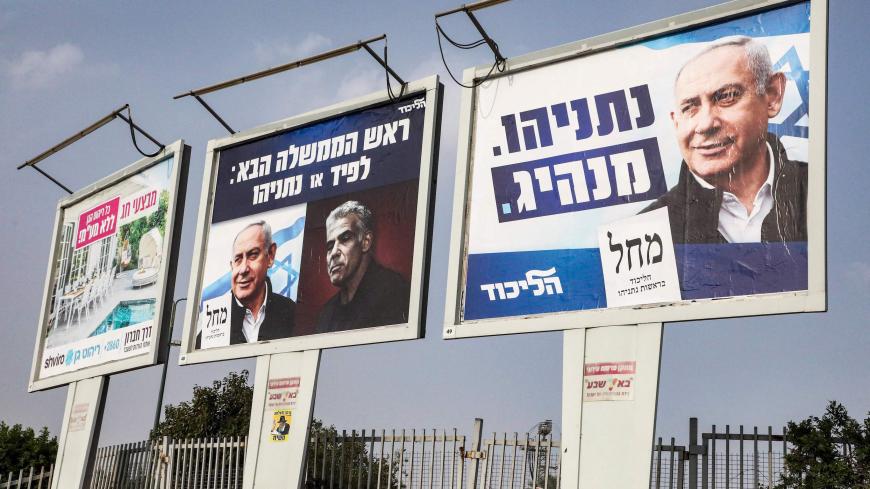 Election billboards for Israel's Likud party (R to L) show the face of Prime Minister Benjamin Netanyahu with the tagline "leader" and Netanyahu with political opponent Yair Lapid with text in Hebrew reading "the next prime minister: Lapid or Netanyahu," in the southern Israeli city of Beersheba on March 15, 2021, ahead of the election due later in the month. - HAZEM BADER/AFP via Getty Images

It seems bizarre, but the most powerful political leader in the center-left camp, Yesh Atid chair Yair Lapid, has still not announced that he is running against Prime Minister Benjamin Netanyahu for the position of prime minister.

As head of the opposition, Lapid has been growing stronger over the last few weeks. Polls show him winning as many as 20 seats, and his standing is improving in rankings of which politician is best suited to serve as prime minister. Nevertheless, he will not admit that he is running for prime minister.

Two other party leaders are often mentioned as candidates to replace Netanyahu: New Hope chair Gideon Saar and Naftali Bennett, the head of pro-settler Yamina. Lapid is far ahead of them both. Saar has already collapsed in the polls, with his party expected to win seats in the high single digits. Bennett is doing slightly better with an expected 11-13 seats. As they both insist that they are running for prime minister, Lapid's name appears nowhere near that lofty title.

In an interview yesterday with the English-language Jerusalem Post newspaper, Lapid coyly said that Yesh Atid is ready to take over the prime minister’s office.

It seems a strange approach, but according to insiders this strategy is the result of lengthy research. Lapid is likely convinced that it is the only way he will be able to push Netanyahu out of power.

There is thought to be strategic coordination between Lapid and the other players working to replace Netanyahu, including Yisrael Beitenu leader Avigdor Liberman as well as Bennett and Saar. The last two are working to draw right-wing voters away from Netanyahu by assuring them that they are firmly aligned with the right. If this group concluded that centrist Lapid is the alternative to Netanyahu, many of them will return to the Likud.

If so, the strategy seems to be working. Speaking on Channel 12’s “Council of Influential Figures” March 7, Lapid announced that he is much more interested in Netanyahu being removed than in becoming prime minister himself. “It is more important to me to remove Netanyahu from office than to become prime minister. Until I know the final results, I am not ruling out rotation.” He said, “Extortion has turned the political system upside down. Five minutes after the election, we will need to restore the public’s trust,” calling upon the political players to act responsibly and not be drawn into political extortion.

It is a clever message of reassurance to right-wing voters that contests Netanyahu’s claim that the choice is between himself and the left and only he stands between Israeli settlers in Judea and Samaria and evacuation.

People seem confused as to who is running against Netanyahu, but they should not underestimate Lapid. He is a an ambitious, hardworking and focused individual. According to those close to him, he has never abandoned his dream of one day becoming prime minister and believes that he is ready. At the same time, Lapid must consider new ways and unconventional approaches to reach this objective, as he is competing with the best campaigner in Israel.

A former strategic consultant for Lapid described this strategy to Al-Monitor on condition of anonymity as “individuals sneaking in to the premiers’ Balfour Street residence.” He contended that Lapid is managing a campaign to become prime minister without saying so explicitly because he is aware that people are uncertain about him. Therefore, it is easier for him to put to put Saar or Bennett up front and keep the focus away from himself.

Just two months ago, Netanyahu was strategizing on the assumption that Lapid would put himself up against him. In that case, it would have been easy for him to do what he does best: sow fear that the left will take down a right-wing government.

To his surprise, however, Lapid is staying in the shadows and gives very few interviews. Netanyahu is doing everything he can to drag Lapid into the ring and has spent the last two weeks piling on the pressure. His campaign spots mock Lapid for hiding and warn that if you look behind Bennett, you will find Lapid.

And yet, much to Netanyahu’s frustration, he has not been able to convince the right to abandon Saar and Bennett and come back to him. It is now estimated that Saar has support worth three or four seats, Likud supporters who are fed up with Netanyahu. If Netanyahu manages to convince them that they would actually get Lapid instead, he could win back two or three seats.

As usual, Netanyahu remains focused. He repeats his message everywhere he can: in interviews, at a growing number of appearances at campaign events and with campaign slogans like “The choice is clear: Vote Bennett and get rotation with Lapid.”

At election gatherings, he asks: Who do you want bringing back the economy, me or Yair Lapid, the worst finance minister in all of Israel’s history? Who will bring more peace agreements, me or Lapid?

Netanyahu has just one week to convince the electorate. To Lapid’s credit, he has been able to maintain campaign discipline and has not gotten dragged into a fight.

Netanyahu could be right. If he fails to put together a government, the next option is a rotation coalition headed by Bennett, who would serve first and be followed by Lapid. If that comes to pass, it is in Netanyahu’s interest to for Lapid to serve first. If Bennett went first, he would be crowned leader of the right and cost Netanyahu his electoral base.

Then again, there is a third option: a fifth round of elections.