The vaccination process is underway throughout the country ahead of Pope Francis' visit. 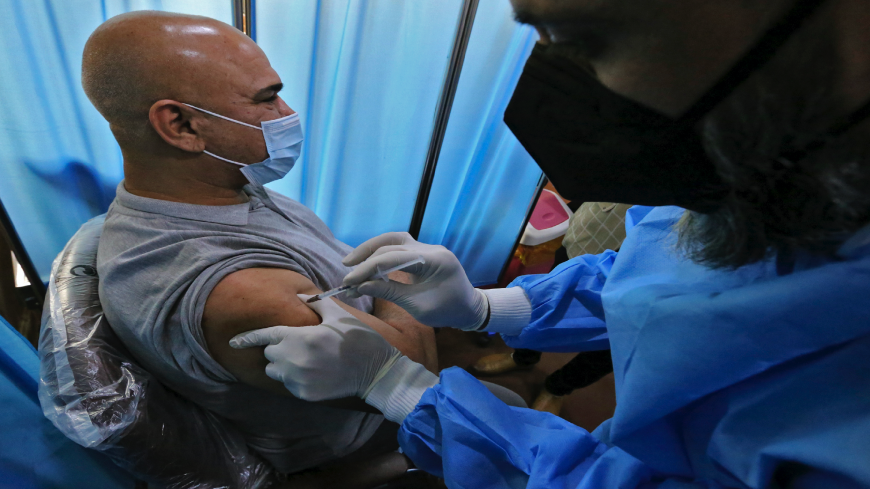 A man displays a package of the Chinese Sinopharm vaccine as Iraqis get vaccinated against COVID-19 at a private nursing home in Baghdad on March 2, 2021. Iraq has been among the countries hardest-hit by the coronavirus in the Middle East, with more than 660,000 reported cases and over 13,200 deaths. - SABAH ARAR/AFP via Getty Images

Iraq has begun administering vaccines against COVID-19. The campaign comes ahead of Pope Francis' visit and during a period of relatively high coronavirus cases.

The Ministry of Health started giving vaccine jabs in the capital, Baghdad, on Tuesday, according to a post on its Facebook page. Doses have arrived in several other provinces as well, including disputed Kirkuk in the north and Najaf in the south, according to the ministry.

Iraq began its vaccine campaign after receiving 50,000 doses of the Sinopharm vaccine from China on Monday night, Reuters reported.

The news precedes Pope Francis’ upcoming visit to Iraq. The head of the Catholic Church will be in the country from March 5-8. Francis will visit Baghdad; the Kurdish capital, Erbil; the northern city of Mosul and other cities. Iraq’s Assyrian, Chaldean and Syriac Christian populations constitute some of the oldest Christian communities in the world.

Health experts told The Associated Press last week that the pope’s visit could be risky due to Iraq’s weak health care system, the high number of coronavirus cases there and the likelihood that Iraqis will crowd to see him. The start of the vaccine campaign just a few days before his visit is unlikely to have an impact on the virus-related risks of the trip.

Like other countries in the region, Iraq has experienced highs and lows in daily COVID-19 cases. The Ministry of Health registered 4,690 cases on Tuesday. The historic high was just over 5,000 in the summer.