Iran's Rouhani: 'We have to pursue negotiations daily'

Rouhani makes a public plea that Iran has waited two months and should hold talks on reentry into the nuclear deal. 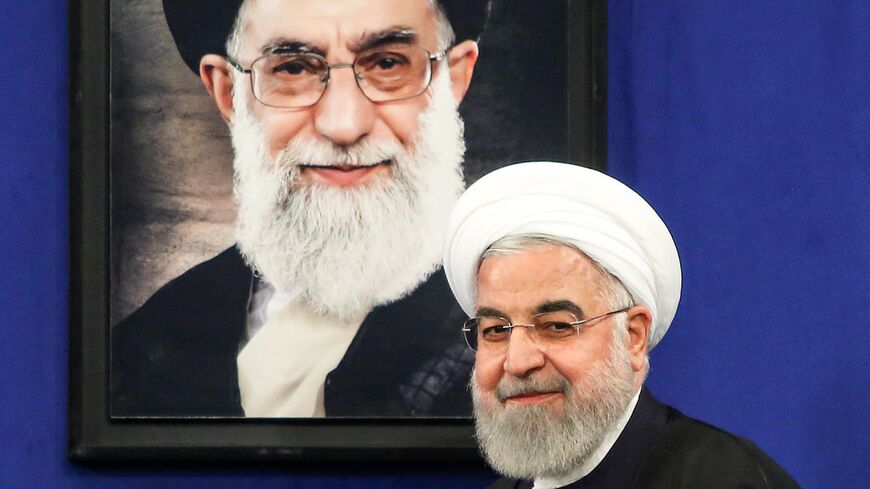 Iranian President Hassan Rouhani walks past a portrait of Supreme Leader Ayatollah Ali Khamenei as he arrives for a news conference in the capital, Tehran, on Feb. 16, 2020. - ATTA KENARE/AFP via Getty Images

During a Cabinet meeting today, Iranian President Hassan Rouhani discussed the ongoing tension with the United States over reentry into the nuclear deal and the economic sanctions on Tehran.

Rouhani said the United States is “100% at fault for the sanctions, no one can doubt this.” He said the “inhumane sanctions” started under President Donald Trump and said he had recently heard there has been an issue on importing chicken because of sanctions.

Trump exited the nuclear deal in 2018 and reapplied maximum pressure sanctions. In response, Iran took steps away from the nuclear deal known as the Joint Comprehensive Plan of Action but remained technically in the deal. President Joe Biden has expressed interest in returning to the deal but demanded that Iran return to full compliance first.

On the Biden administration attempting to portray Iran as the guilty party, Rouhani said, “If we are not careful, they will over time with propaganda say that America is ready to negotiate but it is Iran that is delaying. We cannot allow them to put this excuse into public opinion.” This comment is also likely a reference to domestic actors in Iran, who have rejected US offers for an initial “less for less” deal in which Iran halts 20% enrichment and advanced centrifuges in exchange for some sanction relief. Iran has previously stated they want the US to verifiably remove sanctions and they will return to full compliance and have rejected new negotiations.

Rouhani added, “We have to be more active than before, we have to pursue negotiations daily and to eliminate sanctions. Just as the Supreme Leader [Ayatollah Ali Khamenei] said, we are not in a hurry.” He continued, “Two months has passed and no one can accuse us of hurrying. If we would have gone earlier maybe they could have accused us. But now it's not hurrying and waiting any longer is burning an opportunity.”

The comments above are a sign Rouhani is gently and publicly pushing Khamenei to permit Iran’s nuclear negotiators to hold talks with the United States. Rouhani would like to seal his legacy before the presidential elections this summer. A US return to the deal and the removal of sanctions would establish Rouhani as the person who not only negotiated the nuclear deal but was able to finally get the crippling sanctions off Iran. So far, however, Khamenei, who has final say on state matters, has shown little inclination to hurry.