Rouhani says US has no choice but to lift sanctions

Iran wants the United States to remove all sanctions before it accepts an invitation to talks. 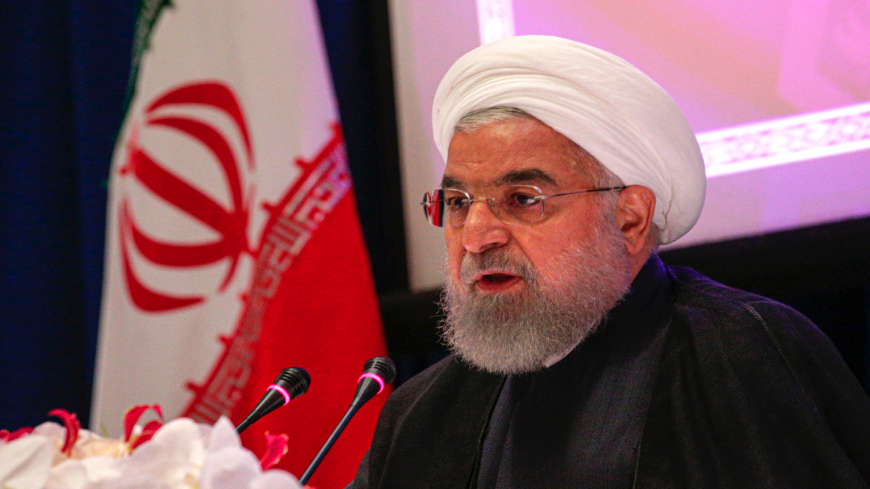 Iranian President Hassan Rouhani speaks during a press conference in New York on Sept. 26, 2019. Rouhani says Iran will "of course" talk to the United States if sanctions are lifted. - KENA BETANCUR/AFP via Getty Images

The latest news over the nuclear crisis between Iran and the United States is that Iran has rejected an offer to meet with American negotiators. The European offer to hold direct US-Iran talks to settle the 2015 nuclear deal between Iran and the five permanent members of the United Nations plus Germany is not the last opportunity for all sides to resolve differences, but most observers believe the window is closing fast.

Iran wants a guarantee of sanctions removal before talking, arguing they are still in the Joint Comprehensive Plan of Action (JCPOA) and it is the United States that has exited and reapplied sanctions. Iran, which has weathered almost three years of maximum pressure under Donald Trump, is not publicly signaling they are ready to compromise outside of the framework of the JCPOA.

Saeed Khatibzadeh, spokesman for Iran’s Foreign Ministry, said Europe’s offer to hold unofficial talks is not appropriate at this time. “There has been no change in the US behavior or positions,” Khatibzadeh said. “And [President Joe] Biden’s administration has not only not removed Trump’s maximum pressure policy but has not stated its desire to implement its full commitments under JCPOA and UNSC Resolution 2231.” Khatibzadeh did not reference what he meant by timing, but the United States recently conducted airstrikes against Iranian-backed groups in Syria in retaliation for attacks on a US base in Iraq.

Khatibzadeh said, “America needs to end its unilateral and illegal sanctions and return to its JCPOA commitments. These acts need not a negotiation nor a UN resolution.”

As a result of the US withdrawal from the JCPOA, Iran resumed parts of its nuclear program. According to Iran, Article 36 of the JCPOA gave Iran the right to take this action due to US withdrawal. They have stated that the steps they took are reversible and will only be done so once the United States lifts sanctions. Biden campaigned on returning to the JCPOA and criticized Trump for his withdrawal. Analysts who support Biden’s call for negotiations before removing sanctions argue that sequencing of sanction removal and Iranian full compliance must be negotiated.

President Hassan Rouhani, speaking today at an opening of a Ministry of Oil site in Bushehr province, said, “I am certain that the world and the US will have no choice but to kneel before the Iranian nation and remove the oppressive sanctions.” Rouhani referred to Trump as a “bully and murderer” and considered it a victory that the Biden administration has admitted that Trump’s policy of maximum pressure has been a failure.

Rouhani said despite enduring a difficult year under “extreme economic sanctions and economic war in addition to the coronavirus,” they were able to undertake important projects, especially in the oil sector. He said the 2015 JCPOA "was a great achievement that realized the rights of the people” but added that Israel and some Arab states in the Persian Gulf worked to “break the back of the JCPOA.”