Iran's foreign minister shot down comments by a senior politician who said Tehran would negotiate if the United States promises sanctions relief within a year. 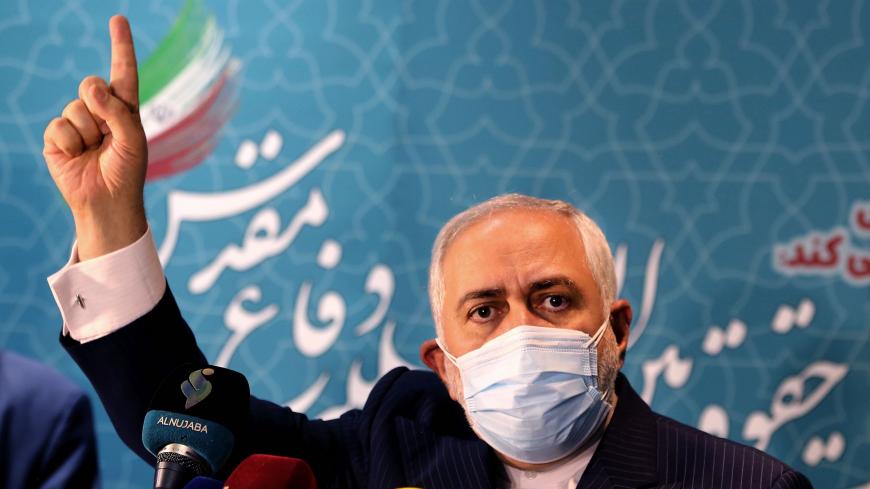 Iranian Foreign Minister Mohammad Javad Zarif speaks during a press conference at the International Conference on the Legal-International Claims of the Holy Defense in the capital Tehran on Feb. 23, 2021. - ATTA KENARE/AFP via Getty Images

Iran’s Foreign Minister Mohammad Javad Zarif said on Friday he would present the United States and European powers with a “constructive concrete plan of action” over reviving the 2015 international agreement to limit Tehran’s nuclear capabilities “shortly.”

The statement is the latest sign of movement from Iran on a potential return to negotiations as Western diplomats aim to restart dialogue as quickly as possible to take advantage of a narrow time window before the country’s presidential elections, scheduled in June.

Zarif also shot down comments by a conservative senior Iranian politician who suggested that Iran was willing to negotiate if offered a “clear signal” that sanctions imposed by the previous administration will be revoked within a year.

“They can announce and reassure us that all sanctions imposed after the [2015 nuclear deal] would be lifted in less than one year and tell us to go and negotiate the process,” said Mohsen Rezai, a policy adviser to Iran’s supreme leader, serial presidential candidate and former commander of the Islamic Revolutionary Guard Corps, according to Financial Times.

Rezai’s comment seemed to signal a softening of Tehran’s public demand that the United States repeal all sanctions imposed since 2018 before negotiations can begin.

“Iranian polity is vibrant & officials express diverse opinions. But those opinions should NOT be confused with state policy,” Zarif tweeted in response on Friday.

“As Iran’s FM & chief nuclear negotiator, I will shortly present our constructive plan of action — through proper diplomatic channels,” he said.

In 2018, the administration of former US President Donald Trump unilaterally walked out of the 2015 international agreement, which placed strict limits on Iran’s nuclear program. Iran has responded by publicly violating the deal, enriching uranium and assembling centrifuges beyond the limits permitted by the Joint Comprehensive Plan of Action.

US officials have also accused Iran of at least indirectly enabling attacks by its proxy forces in the region on Saudi Arabia and US and international coalition forces in Iraq, in addition to sabotaging oil tankers in the Persian Gulf in 2019. Iran has denied responsibility for such incidents.

The conflicting signs from Zarif and Rezai came one day after Reuters cited two anonymous European diplomatic sources as saying Tehran had sent “positive signals” about the potential for future direct negotiations over the last few days. One source told Reuters that Western negotiators were aiming to start talks before the Iranian new year on March 20.

Yet Tehran continues to demand guarantees of pathways to sanctions relief before participating in the talks, something US officials so far reportedly remain reluctant to do.