The deal between Iran and China is more of a “road map” than a specific deal. 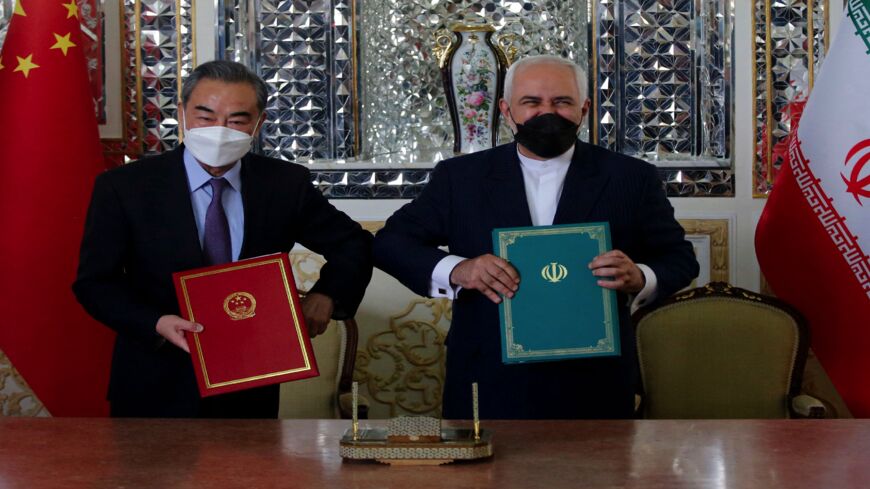 Iranian Foreign Minister Mohammad Javad Zarif (R) and his Chinese counterpart, Wang Yi, pose for a picture after signing an agreement in the capital, Tehran, on March 27, 2021. Iran and China signed what state television called a "25-year strategic cooperation pact" today as the US rivals move closer together. The agreement, which has been kept almost entirely under wraps, was signed by the two countries' foreign ministers, Mohammad Javad Zarif and Wang Yi, an AFP correspondent reported. - AFP via Getty Images

Iran and China signed an agreement for long-term economic cooperation over the weekend that had been in the works for years. The deal gives China a stronger presence in one of the most populous countries in the Middle East and gives Iran a lifeline as it continues to battle US economic sanctions.

The signing by the foreign ministers of Iran and China created a stir both on social media and regular news outlets, so much so that Iranian media outlets wrote a number of explanations and clarifications.

Tasnim New Agency wrote an article titled “8 answers to questions about the agreement between China and Iran.” It stated that the agreement dates back to 2016 when the Iranian and Chinese presidents announced in a joint statement in Tehran plans to form a 25-year agreement. In a meeting with China’s president, Supreme Leader Ayatollah Ali Khamenei — who makes final decisions on all state and foreign policy matters — expressed support for the joint statement.

Many observers saw this agreement as a blow to the United States in its efforts to isolate Iran. The United States exited the nuclear deal between Iran and the five permanent members of the UN Security Council plus Germany and Iran in 2018. President Joe Biden has expressed a desire to reenter the deal and even sign an extended deal, but Iran is demanding the United States lift sanctions first before they return to full compliance with the original deal known as the Joint Comprehensive Plan of Action. Either way, the article, citing Iran’s foreign minister, said the deal was not signed with any third parties in mind.

In regard to the various figures that have been thrown around about the deal between Iran and China, some referring to it as a multi-trillion dollar deal and others calling it a $400 billion deal, Tasnim wrote that there are no official numbers or details. Rather, citing an Iranian journalist, they referred to the deal as a “road map and framework for long-term cooperation.”

Regarding speculation that Iran gave away too many concessions in the agreement, Tasnim news agency said that while details of memorandums of understanding are often published, it is not always necessary to publish details of agreements that are not binding. Also, the article continued, due to US sanctions it was better not to publish details of the deal.

The article also stated that Iran’s parliament would not need to ratify this agreement because, as previously stated, it is more of a “road map and framework” than a specific deal.

Given that Khamenei himself had previously expressed support for the agreement and that China is a strategic partner, for Iran anyway, there was no critical coverage of the deal. Most of the editorials were either explainers discussing and analyzing the importance of the deal or supporting the deal. Regardless, the agreement does signal that Iran and many of the key players in the Islamic Republic see China as a necessary economic ally for decades to come.