The Palestinians were greatly disappointed at the results of the Israeli elections, which showed that far-right parties secured major gains, which could hinder the resumption of negotiations. 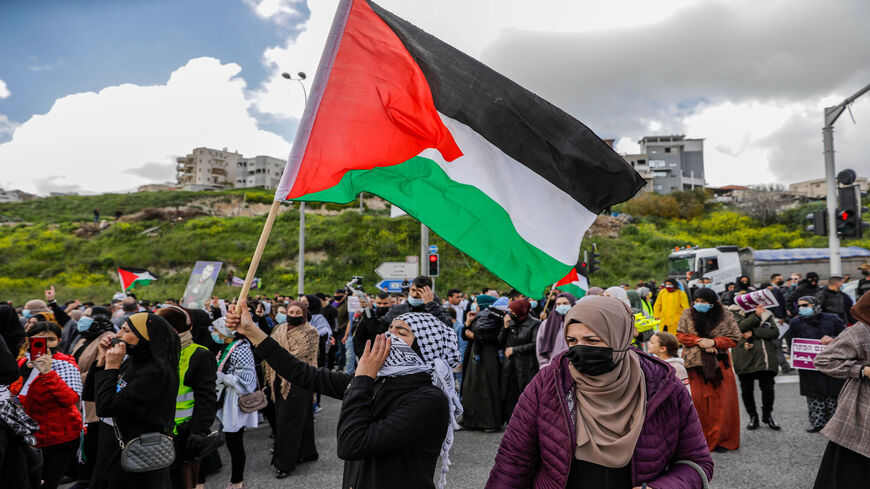 A demonstrator waves a Palestinian flag as Arab Israelis march during a demonstration in the mostly Arab city of Umm al-Fahm, against organized crime and calling upon the Israeli police to stop a wave of intracommunal violence, northern Israel, March 12, 2021.

The Israeli Central Elections Committee announced March 26 the final results of the fourth early elections that took place on March 23. According to the results, the right-wing camp led by Prime Minister Benjamin Netanyahu garnered 52 seats out of 120 in the Knesset, while his opponents won 57 seats. This means neither Netanyahu’s right-wing alliance nor his opponents secured a 61-seat majority to form a government.

Netanyahu's right-wing party had allied itself with far-right parties to run in the elections, including the Religious Zionist Party and the Yamina party.

Although the Palestinians perceive the Israeli elections as an internal Israeli matter, they are worried about the current results affecting their political reality, thus further hindering any future negotiations and creating yet other facts on the ground in the West Bank.

Wasel Abu Youssef, a member of the PLO’s Executive Committee and secretary-​general of the Palestinian Liberation Front, told Al-Monitor, “Right-wing parties achieved significant gains in the recent Israeli elections and these deny the Palestinians their rights and reject any calls to resume peace negotiations. The election results revealed that the Israelis are tilting toward the right wing, and this impedes any US or international action to revive the peace process, especially if the right-wing electoral slogans regarding the annexation plan in the West Bank were delivered upon. As a result, the Palestinian leadership may have to intensify its political efforts with both the international community and the popular resistance on the ground.”

The London-based newspaper Asharq Al-Awsat reported March 25 that the Palestinian Authority (PA) had instructed against the release of statements about the Israeli elections. This may infer that it supports an Israeli party at the expense of another.

On Feb. 22, the Israeli Yedioth Ahronoth paper revealed that Knesset member Fateen Mulla, a deputy minister in the prime minister’s office, reached out to officials from the PA to push the latter to encourage Arabs in Israel to vote for the Likud. The PA saw that competition in the elections was between the Israeli right represented by Netanyahu, and the more hawkish right represented by Gideon Saar, who leads New Hope, and Naftali Bennett, head of the Yamina party. The PA reportedly prefers the relatively more moderate right-wing Likud party.

On the same day, the PLO Committee for Interaction with Israeli Society, established in 2012 and led by Mohammed al-Madani who is also a member of Fatah’s Central Committee, issued a press statement saying that it is meeting with representatives of the various Israeli parties with the same message calling for an end of occupation. The committee neither denied nor confirmed meeting with Likud representatives.

Saeed Bisharat, editor-in-chief of al-Hodhod news network focusing on Israeli affairs, told Al-Monitor, “The results of the Israeli elections infer that no Palestinian-Israeli negotiations are in sight, that the relationship between the two sides will be limited to security coordination and that the situation will be difficult in the West Bank amid an intensified settlement activity and the implementation of the annexation plan.”

He added, “The Gaza Strip will not be affected much by the results of the Israeli elections as the Israeli army and intelligence have a clear [unchanged] policy regarding Hamas. Through Egypt and Qatar, the movement had concluded with Netanyahu humanitarian understandings in October 2018 to breathe new life into the humanitarian situation in Gaza.”

Nabil Shaath, special envoy of PA President Mahmoud Abbas, told Xinhua news agency March 24 that he did not expect a change in Israel’s policy toward Palestine in the wake of the elections, whose results have reinforced the far-right, which could impede the achievement of peace in the region.

In a March 23 press release, the Palestinian Ministry of Foreign Affairs in Ramallah accused Netanyahu of taking advantage of his rule since 2009 to expand settlements, annex more of the occupied Palestinian lands and complete the Judaization of Jerusalem.

Basem Naim, a former Palestinian health minister and member of Hamas’ international relations office, told Al-Monitor, “The results of the Israeli elections created three problems: The first is that they proved Israeli’s tendency toward the far-right, and this diminishes the concepts of peace and coexistence among the Israelis. The second is that they entrenched extremism within both the Knesset and the next government, which is why it will be difficult for the US administration to solve the Palestinian-Israeli conflict. The third is that any future Israeli government will be fragile, weak and unable to take fateful decisions to solve the conflict with the Palestinians since the Knesset is divided.”

Hamas spokesman Fawzi Barhoum indicated in a press statement March 24 that the next Israeli government will not change the nature of the conflict with the Israeli occupier.

Hazem Qassem, another Hamas spokesman, said in a press statement March 23 that the competition in the Israeli elections is between the right wing and the far-right.

Yusef al-Hasayna, a member of the political bureau of the Palestinian Islamic Jihad movement, explained in a press statement March 24 that indications whereby the Israeli far-right won the elections show that Israel is biased toward extremism and terrorism, and infer a victory for the racist and fascist right, currenlty dominating the decision-making circles.

Khalil Shaheen, head of the research department at the Palestinian Center for Policy Research and Strategic Studies - Masarat, told Al-Monitor, “In the wake of the Israeli elections, the PA will be focusing on activating foreign pressures on Israel, resorting to the Biden administration and intensifying contacts with the international community without seeking any rupture with Israel. Despite the expected formation of a right-wing government, the PA will maintain security and civil coordination with such a government.”

He noted, “The announcement of the results of the Israeli elections coincided with two important events to take place in the Palestinian arena: The first is the general elections, in which Hamas is set to take part, and the second is the International Criminal Court embarking on the procedures to investigate Israeli crimes against Palestinians. These two developments alone are capable of straining the Palestinian-Israeli relations, but the PA will seek to preserve the status quo in the relationship with Israel to buy more time, especially considering that the 'deal of the century' [in reference to the US Middle East peace plan] has been removed from political deliberation.”

The Palestinians are well aware that the results of the Israeli elections will have direct negative effects on their political reality. In light of the prevailing Palestinian convictions whereby the next Israeli government will be for the right wing — regardless of whether it was headed by Netanyahu or any of his opponents — this further aggravates the relationship with the Palestinians, as it dashes the hopes they built in the wake of Biden’s arrival to the White House and his possible launching of a peace process.