Amateur and professional divers are searching Gaza's coast for Egyptian sailors feared dead in a goodwill gesture toward Cairo. 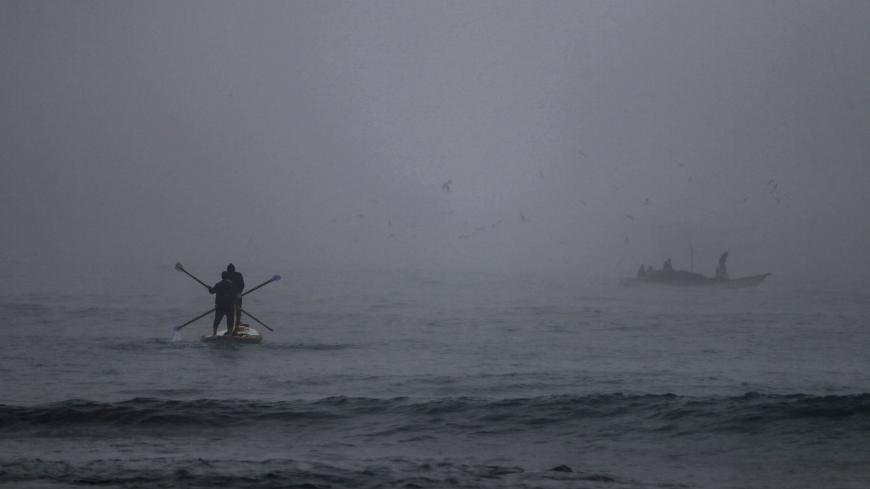 Palestinian fishermen set out to sea amid heavy morning fog in Gaza City on Jan. 3, 2021.

GAZA CITY, Gaza Strip — Around 30 amateur and professional divers in the Gaza Strip are searching off Gaza's shores for Egyptian sailors who went missing Feb. 17 off Egypt's Port Said during the rainstorm that hit the area Feb. 16 and went on for days.

The mission began Feb. 26 from the shores of al-Zahra city and reaching 25 kilometers (15 miles) south to Rafah. The Palestinian divers are searching the sea, bearing Egyptian flags in solidarity.

The Ministry of Interior in the Gaza Strip announced Feb. 20 that it had found the body of one of the four missing sailors who was washed up on the shore of Rafah. “Identification documents found on the body indicated that the deceased was Egyptian,” the ministry said.

Palestinian fishermen are often shot at by the Egyptian navy when they near Egypt's maritime border and this initiative seems to be sending a message to Egypt to soften its policies toward those who accidentally cross into Egyptian waters while fishing.

The most recent incident occurred Sept. 26, 2020, when Egyptian forces killed two brothers from the al-Zaazou family in the Gaza Strip — Hassan, 26, and Mahmoud, 22 — while they were fishing. The third brother Yasser, 33, was arrested and not released until Jan. 17, 2021.

Hani Meqdad, who is directing the search operation in Gaza, told Al-Monitor, “We found no trace of the other missing Egyptians.”

He said, “The campaign aims to send a message of gratitude to Egypt, which has been trying to achieve reconciliation between Fatah and Hamas since the Palestinian rift in 2007. It is also a humanitarian message of Palestinian sympathy with the Egyptian people.”

He added, “Allowing the entry of advanced diving equipment to Gaza would certainly contribute to reaching remote places and conducting wider searches to find the missing Egyptians.”

Mohammad Asaad, a photojournalist and amateur diver in the Gaza Strip, joined the search. Wearing diving gear as he prepared to set out, he told Al-Monitor, “We have divided ourselves into small groups. Each group is responsible for a stretch of the shore.”

He added, “We search daily between the rocks at the bottom of the sea in hope of finding a trace of the missing Egyptians.”

Asaad expects the Egyptian sailors to be long dead, as it has been over two weeks since their disappearance, but he holds out hope for finding the bodies and putting them to rest. He said the search will continue until all the bodies are found or until Egypt halts the efforts.

Abu Marzouq told Al-Monitor that he received many calls from residents of Port Said and divers searching off Egypt's coast asking the Palestinian volunteers to continue their search and not lose hope.

He added, “The searches under this initiative are focusing on the shores of the center and south of the Gaza Strip, but if we are unable to find anything, we will move to the coasts in the north. But hope of finding the missing people are dim.”

He said that Palestinian divers are working without compensation and that the diving community in the Strip is struggling with a lack of material and organizational resources including equipment.

Abu Marzouq called on Egypt to allow the entry of diving gear to Gaza and to treat Palestinian fishermen who accidentally cross into Egyptian waters, as the Palestinian authorities treat Egyptian sailors who lose their way and end up on Palestinian shores.

On Jan. 17, 2010, the civil defense in the Gaza Strip rescued six Egyptian fishermen after their boat capsized and the wind blew it toward the Gaza shores. The fishermen were treated well and honored by Hamas' Ministry of Interior.