Netflix has started airing a second Egyptian original series about Abla Fahita as the US streaming giant seeks to expand its viewership in the Arab world. 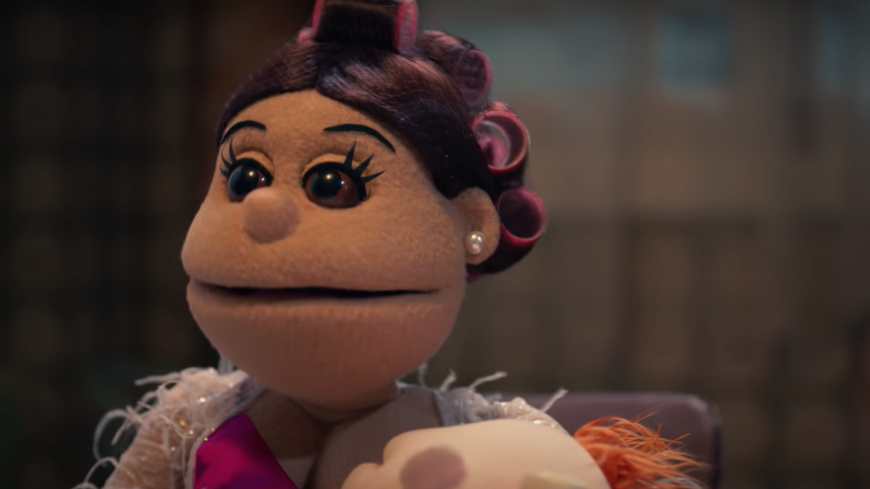 A screen grab from the Netflix trailer for Drama Queen. - YouTube/Netflix

Marking her debut into the drama world with her distinctive splendor, Netflix started airing March 15 the anticipated show of Abla Fahita, the Egyptian satirical puppet turned celebrity in her country and the Arab world. The series is the second original production by the world’s leading streaming entertainment service for an Egyptian show.

The series, dubbed "Drama Queen," sheds light on Abla Fahita’s human side and tests her dramatic capabilities in an action-packed comedy drama full of thrill. The show follows the adventures of the puppet, whose life is turned upside down as she is implicated in a crime after becoming one of the leading stars in the Arab world. The illustrious diva then goes on the run and is separated from her children as she finds herself being chased by the law and society, but she will stop at nothing to regain her glory and her children.

"Drama Queen," which is part of Netflix’s efforts to expand its presence and draw larger audiences in the Arab world, consists of six episodes and represents a new type of comedy drama. The series was filmed in Cairo and Giza, and is directed by Egyptian director Khaled Marei and produced by the emerging Egyptian company OKWRD Productions.

“I am a widow famous for her witty humor and daring sarcasm, but behind all this [there] is a widow filled with drama and lots of other hidden talents. Few are aware of the amount of drama a widow carries with her in daily life. So when I was approached by Netflix to become their new Middle East sensation, I decided to turn my own drama-packed life into a series the whole world would want to watch and follow,” Abla Fahita told Al-Monitor.

Abla Fahita first appeared online in 2010 and gained popularity by openly defying taboos and commenting on Egyptian issues with her sharp tongue and acid humor. The widow then launched her own program on CBC channel in 2014, and a year later started a weekly live satirical show where she gave her take on current events and social topics, and dived with celebrities in their uncharted personal territory, creating a new mode of entertainment — and gaining on the way both lovers and haters.

The puppet character also began a singing career with a hit single in 2014 along with Egyptian composer and heartthrob judge of "Arabs Got Talent," Hassan el-Shafei. She later continued experimenting with different genres and unconventional duets with other celebrities. Abla Fahita also hosted the red carpet event of the Dubai International Film Festival for three consecutive years, and the new model of advertising that was created around her allowed JWT Entertainment in Cairo to become the first agency in Egypt to ever win the Titanium award at the Cannes Lions Festival of Creativity in 2015. The series is part of Abla Fahita’s growing appetite to keep exploring her talents in new formats.

“We are very excited to be collaborating with Abla Fahita, one of the most prominent comedians in Egypt and the wider Arab region. We are looking forward to working with [her] in order to bring our Arab and international audience a fun innovative series full of laughter and excitement,” Ahmed Sharkawi, Netflix’s director of international originals, said when the company announced that the puppet would join its line-up of original series.

Another puppet star and a main character of the series is Abla Fahita's daughter Caro, who relies on herself in the absence of her mother, takes responsibility for her brother and is a leading figure on helping her mother to discover the truth. The series’ cast also features famous Egyptian actor Bassem Samra, who helps manage a cabaret, and Donia Maher, a flower seller outside the cabaret who develops a relationship with Fahita.

“Because I am a mother, I dragged my daughter Caro and my beloved baby Boudi along with me, to show the world something they have never seen before. A wonder widow in an action-packed drama filled with song and dance along with suspense, action and thrills. Caro, the new rising star, will amaze with her performance and talents, all thanks to my genes, and my baby Boudi will win you over even without doing much,” Abla Fahita said.

The production of the first season of "Drama Queen" kicked off in early August 2020 in various locations in Cairo, and it was wrapped up in mid-October, according to Netflix. The awaited series, which was first scheduled for release in 2020, will be available in 190 countries in over 30 languages for Netflix’s 193 million subscribers.

"Drama Queen" expands Netflix’s catalogue in Egypt after the world’s leading streaming entertainment service started airing in November 2020 its first Arabic original production from Egypt, "Paranormal." The series, based on a best-selling thriller novel series penned by well-known Egyptian author Ahmed Khaled Tawfik, is set in the 1960s and tackles the story of a cynical haematologist whose world is turned upside down when he questions his strong scientific convictions after experiencing a series of paranormal activities.

One month before, Netflix had released the well-reviewed "Secrets of the Saqqara Tomb," a new original documentary inspired by the discovery of a 4,500-year-old tomb belonging to a priest from Egypt’s Old Kingdom in the ancient burial ground of Saqqara.

Last May, the US giant streaming entertainment service also announced a new deal with the multi-award winning Egyptian Tunisian actress Hend Sabry starring in a new original series. The show is still untitled and no formal date has yet been scheduled for its launch, but it is expected to be filmed in Egypt, according to a press release. Sharkawi explained that the new show will be a female-focused story.