The US streaming giant Netflix has started airing "Paranormal," the first original Egyptian Arabic-language series, as part of its efforts to boost its activity in the Middle East and draw a larger audience. 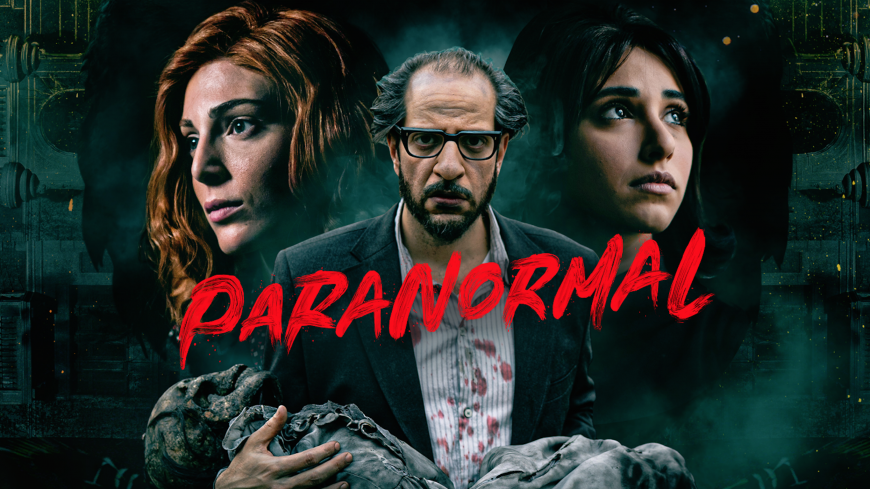 A screen grab from the official trailer for "Paranormal." - YOUTUBE/Netlflix

In a new success story for the Egyptian film industry, Netflix started airing Nov. 5 its highly anticipated first Arabic original series it has produced from Egypt. The launching of "Paranormal" took place as the world's leading streaming entertainment service tries to expand its presence and draw larger audiences in the Arab world.

The series is set in the 1960s and tackles the story of a cynical haematologist, Refaat Ismail, whose world is turned upside down after he starts to question his strong scientific convictions after experiencing a series of paranormal activities as he enters his 40s. In the first season, Ismail and his university colleague Maggie immerse themselves in this paranormal world and try to save their loved ones from the dangers around them.

"Paranormal" is based on a best-selling thriller novel series with the same name penned by well-known Egyptian author Ahmed Khaled Tawfik, who is considered the father of horror and science fiction genres in contemporary Arabic literature and has sold more than 15 million copies. The series is produced by Mohamed Hefzy and Amr Salama, who is also its creator and director. Ismail is played by actor Ahmed Amin.

“The expectations can always be too high in a way that could hurt the show if it does not deliver as per such expectations,” Hefzy told Al-Monitor. “Thankfully, I feel with the feedback we have received during the [first] 24 hours that it did more than deliver.”

The much-awaited series was released in 190 countries and is available in over 30 languages for Netflix’s 193 million subscribers. "Paranormal" is dubbed in nine languages, including English and Turkish, and it is the first Egyptian original series with audio and written descriptions for the hearing or visually impaired.

“It’s an honor and a privilege to be the first to produce an Egyptian Netflix original,” Hefzy said. “It’s also a great learning experience on how to produce a high-quality, bigger budget premium series and see it launch in multiple territories simultaneously. It is a huge operation — even the marketing is very precise and well planned.”

“It is still too early to judge the outcome [of Netflix’s role in Egypt] as so far [it has] produced few shows in the Arab world. It will become more clear in the next two to three years,” said Alaa Karkouti, co-founder of the production company MAD Solutions and the Arab Cinema Center. He told Al-Monitor. “But obviously, this is changing the market standards — to get more creative shows and films based on the diversity Netflix created in the content around the world.”

He added, “[Netflix] provides super high-quality production, more open-minded topics — to a certain point, due to strict censorship around the Arab world — and it encourages more new talents to present their visions and projects. [Thus] it will make the industry more organized so they can compete with Netflix's standards.”

Netflix decided to film "Paranormal" in Egypt in order to stay true to the books it is based on and to reflect its commitment to creating authentic Egyptian content for global audiences. The series’ cast and crew is also made up of both Egyptians and other Arabs.

“We are investing in stories made by Arabs for Arabs, instilling pride, showcasing Arabic-language shows and films to the world, and providing Arab talent and filmmakers with a platform to gain fans globally,” Ahmed Sharkawy, director of Arabic and African Originals at Netflix, told Al-Monitor. “We want more people around the world to have access to great stories and have the chance to see their lives represented on screen.”

On Dec. 23, 2019, Netflix announced that its second original series from Egypt — “Drama Queen” — will follow the adventures of the iconic diva Abla Fahita, a satirical puppet character that has drawn millions of audiences on television before. The action comedy drama will feature Abla Fahita’s first acting in a scripted series as her life is turned upside down after being implicated in a crime, separated from her children and shunned by society. The series is produced by two Egyptian production companies — OKWRD and ASAP Productions — and is set for release in the first half of 2021.

In October, Netflix also released a new original documentary inspired by the discovery of a 4,500-year-old tomb belonging to a priest from Egypt’s Old Kingdom in the ancient burial ground of Saqqara, located south of Cairo. Titled “Secrets of the Saqqara Tomb,” the production follows a team of local archaeologists excavating the area. The documentary has received a remarkably good review.

As part of Netflix’s plan to localize its offering for the Egyptian market, the company rolled out billing in local currency for members in the country in January, even if the adjustment kept the previous prices in dollars. Netflix has already given subsribers the option to pay with local currency in the United Arab Emirates and Saudi Arabia.

“We work with the creative community from Egypt and across the Arab world,” Sharkawy noted. “We know how important it is to have a slate that offers diversity and variety, and as a global business it is incredibly important for us to make sure our slate reflects the diverse cultures and experiences of our members.”

The launching of "Paranormal" comes as Netflix makes increasing efforts to grow in the region and at the same time present Arab talents and productions to audiences around the world. In June, the streaming company released a catalogue of 44 Arabic films that included iconic masterpieces and contemporary films, covering well-known directors such as Egyptian Youssef Chahine, Lebanese Nadine Labaki and Syrian Moustapha Akkad. Netflix aimed to rediscover masterpieces that are part of the Arab world’s cinematic heritage, and at the same time provide Arab rising stars a platform to gain fans worldwide. All films included subtitles in Arabic, English or French. Its first Arabic original series — “Jinn” — was filmed in Jordan and was launched in 2019.

In May, just before Eid al-Fitr, Netflix presented to its audiences a series of comedy plays added on a service called Arabic Nostalgia that features stories that have marked an era in the region, including “El Eyal Kebret” and “Bye Bye London.”

As part of these efforts, Netflix invited an Egyptian writer, among 11 others from six countries, to participate in its first workshop for showrunners. The workshop took place in Amsterdam and lasted 2½ days, as the company continues its expansion into local language content in these countries.

“We love empowering Arab creators to tell their stories in the most powerful form and hence we provide the resources — time to perfect ideas, and technical and creative resources to deliver the best version of their work,” Sharkawy said. “We will continue to work with Arab storytellers to create content from the region that tells authentic stories.”

He concluded, “For Netflix, great entertainment is not just about exporting US content internationally. It is about sharing stories from the world with the world, and we are delighted to give Arab stories a home on Netflix.”